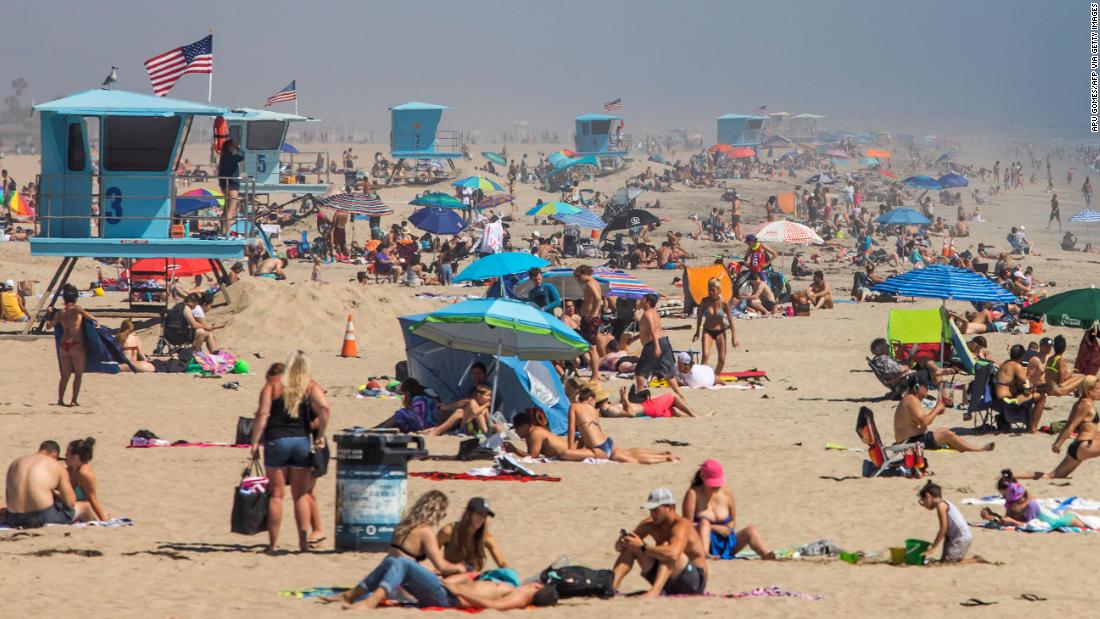 While beaches in Los Angeles and San Diego Counties remained closed, they were open in Ventura and Orange Counties. However, beachgoers still had to adhere to a patchwork of guidelines and restrictions, including keeping parking lots closed to discourage outside visitors and limit crowds. “It’s a beautiful day,” Frank Feerini, who was at Huntington Beach in Orange County, told CNN affiliate KABC Saturday. “How can you keep anybody in?”

The summer-like weather was a big draw for many who flocked to the beach.

“I think that people want to get out,” Feerini said. “I think they’ve been cooped up, I think they’re going stir crazy.”

Authorities in both Ventura and Orange Counties reported excellent behavior by beachgoers, who they said were observing social distancing rules after weeks being hunkered down to slow the spread of the virus.

By Sunday, temperatures had cooled down a bit in the region, but that didn’t deter people from trekking to the beach to soak in the sun.

At Deer Creek Beach, just north of the Ventura County line and about 13 miles west of Malibu, beachgoers threw frisbees, played fetch with their dogs, waded into the cool water and went surfing.

Many did appear to follow social distancing guidelines while engaging in the outdoor activities.

“I just saw some friends who I had not seen in six weeks and we greeted each other but maintained social distancing,” Nick Rosenfeld, who lives in Malibu, told CNN.

“But it’s tough,” he added. “We’ve got to get back to work. I’m an unemployed personal trainer, and this is the first time I’ve been out of the house in a long time.”

The scenes at Ventura and Orange County beaches were a stark contrast to the empty neighboring Southern California beaches.

Under the county’s stay-home order, beaches — as well as beach parking lots, restrooms, showers and accessways — will remain closed through May 15.

The 22-mile bicycle path that runs along the LA County coastline is also closed to pedestrians. Signs in Santa Monica, California, that block the path read “temporary closure” and “public health order. Restricted area. Do not enter.” In front of the beach’s parking lots, the message on the signs are also a reminder to residents and visitors to steer clear: “Beach and beach lots are closed.”The LA County Sheriff’s Department sent a reminder to residents on Twitter to avoid beachside hangouts. “Enforcement is in full effect!” the department wrote.To help those trying to beat the heat — and help people avoid the temptation of going to beaches — LA County officials also opened emergency cooling centers.San Diego beaches are also closed under a similar order, though authorities announced Friday that they would allow access to the water beginning Monday for swimming, surfing, paddle boarding and kayaking.

“My compliments to our community for staying away from the beaches in LA,” he wrote. “From Malibu, Santa Monica, Venice, to Dockweiler – All Clear!! Safer at Home will get us there sooner.”

In a statement, a spokesman for Gov. Gavin Newsom said that Californians have a responsibility to abide by the state’s stay-home order. When they do venture out, they should practice social distancing.

“California is grateful to the vast majority of local leaders who are helping people stay home and save lives,” press secretary Jesse Melgar said in a statement Sunday afternoon.

“Public access to parks, beaches or open spaces comes with a heavy responsibility to ensure that safe conditions are maintained consistent with the state order. We’ve come too far together to put the greater public health at risk.”

Don't Miss it In a testy post-Covid-19 world, Chinese sanctions of Australian goods may be closer than ever | Richard McGregor | Opinion
Up Next Australian scientists racing to find effective treatments for COVID-19 | ABC News