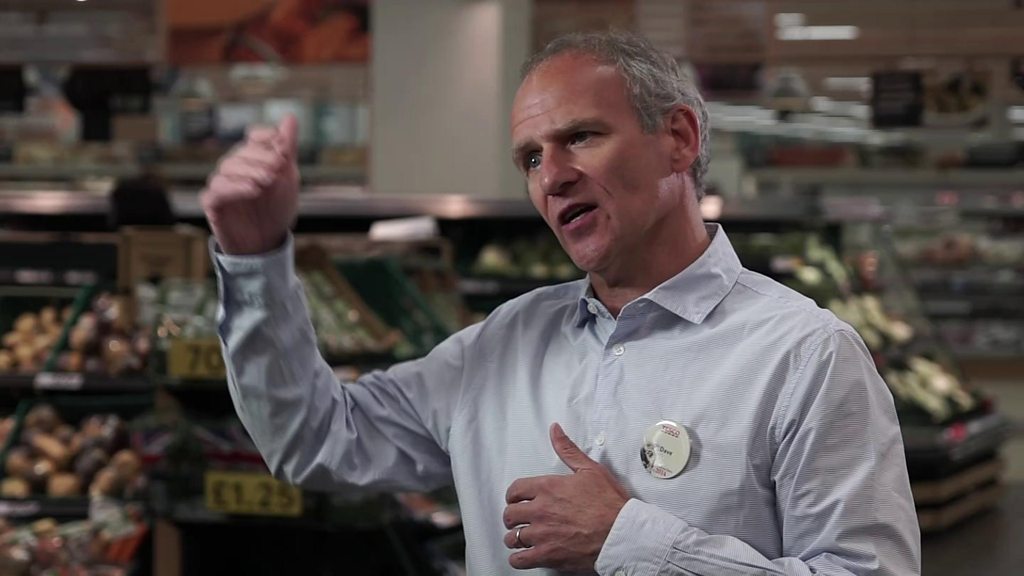 Media captionTesco online deliveries to double in a month

People have reverted back to shopping the way they did a decade ago by making one big weekly trip to the supermarket, according to the boss of Tesco.

He said that the number of transactions in April nearly halved, but the size of the average basket had doubled.

Mr Lewis added Tesco has now broken through the one million online delivery slots a week for the first time.

He expects the supermarket will add a further 200,000 slots over the next ten days, in particular from vulnerable customers.

Tesco has achieved an increase in online capacity of 103% in the space of a few weeks, growth which would normally take years to achieve. The other supermarkets have also ramped up delivery slots. Before the crisis, only about 7% of all groceries were bought online.

“We’re trying to help as many people as we can. And the single biggest thing has been the change in online shopping,” he said.

“The issue that we have is that when the government talks about vulnerable customers, it has very specific guidelines and they had about 400,000 that they wanted the retail industry to help. They gave us 350,000 of those names and we got to 260,000.

“We will want to do more, but there’s still more demand than we’re able to supply,” Mr Lewis said.

In his first broadcast interview since the outbreak of coronavirus, Mr Lewis spoke about how Britain’s biggest retailer had adapted and how shopping habits have changed during lockdown.

“People are shopping once a week, a little like they did 10 or 15 years ago, rather than two, three or four times a week that was happening before the crisis.” He added that during the surge in panic buying – when customers stripped supermarket shelves of goods like liquid soap, toilet roll and pasta – Tesco “had seen seven weeks of sales going in one or two days”.

“The food supply chain is now back in good shape,” he believes. Flour, though, is still in short supply.

Mr Lewis described the last six weeks as “incredible” adding that “just about everything in the business had changed”. For instance, Tesco has taken on 45, 000 temporary workers to help cover for the 51,000 staff who were absent because of Covid-19 and cope with the increase in online deliveries.

Mr Lewis said the company, the UK’s biggest private sector employer with more than 300,000 workers, is now in the process of welcoming back staff who have been away while those temporary hires leave. “We still have probably 35,000 to 40,000 double cover at the moment,” he said.

“I think what was really quite humbling was the willingness of people to come and work in a supermarket and help us feed the nation. We’ve had some very interesting new colleagues – from BA pilots, West End theatre, to racing drivers… and we’ve trained them all very quickly”.

The priority is to keep his staff and shoppers safe. “I’ve been really quite amazed how well 99% of our customers have adapted to the changes in stores, ” he said. “But we have to recognise that until the advice of the government changes, then we need to maintain social distance. So, we will, for the foreseeable future have to keep those measures in place.”

The challenge will be keeping the discipline in smaller stores, especially in city centres, when people return to work.

Mr Lewis was asked about the impact of coronavirus on retail and High Streets more broadly. He said a lot depended on how customers behave once the crisis is over but he hoped it would encourage the country to think about its future food strategy.

“I think the food chain has done really very well. Two weeks after such a big demand spike everything did recover, so there is resilience.

“I think what this crisis has shown is the importance of food retail. I think in the past, perhaps, a little bit we may have taken that for granted. So I hope that as a nation, we’ll think carefully about food, food strategy and distribution.”