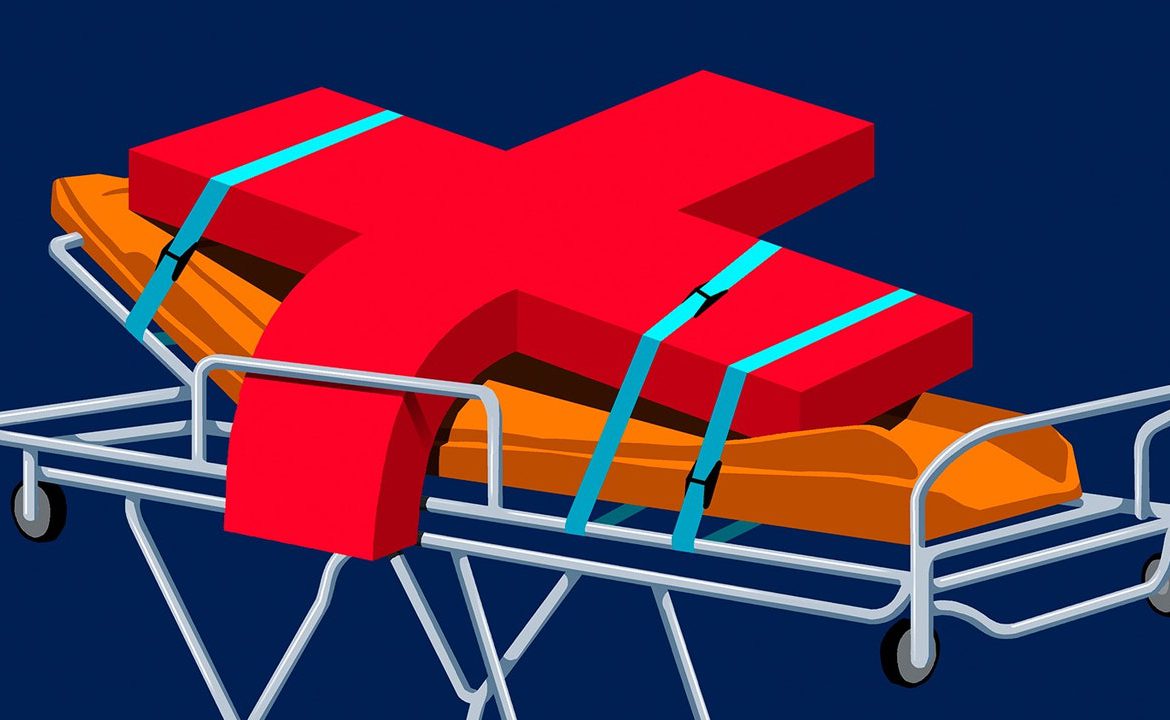 Bowen kept thinking about the next pandemic, when the supply of masks from China might plummet and the demand for domestic masks might surge again. He sent letters warning about a potential supply-chain problem to President Obama in 2010, and to President Trump in 2017; he wrote to the Defense Secretary; to hospital-safety associations; to officials at the Centers for Disease Control—hundreds of letters in all. He must have seemed, at times, like an obsessive crank. “I got a form letter from the White House, thanking me for my concerns,” he said. “Everybody ignored it.”

When COVID-19 hit, China shut down many of its factories, and retained most of its diminished production of masks for its own use. For a while, exports declined to a trickle. Today, Bowen’s company has increased its manufacturing almost fourfold, producing at least a million masks a day. But that’s only a fraction of the demand; he has had to turn away orders for hundreds of millions a day.

There’s another place that hospitals and clinics could have looked to for masks, gloves, and gowns: the Strategic National Stockpile—a repository of emergency equipment that can be deployed on short notice during a crisis. On March 4th, six weeks after the first case of COVID-19 had been reported in America, the S.N.S. announced its intention to buy six hundred million N95 respirators in the next eighteen months. Even if private-sector orders were cancelled when the pandemic subsided, the contracted companies—Honeywell, Dräger, 3M, Moldex, and O&M Halyard—would thus have a guaranteed buyer. But pandemics don’t go on hiatus for eighteen months, patiently waiting for medical supplies to accumulate. The day after the S.N.S. announcement, the state of Massachusetts requested seven hundred and fifty thousand N95 masks (and a similar number of surgical gowns and gloves) to protect its doctors and nurses. Two weeks passed—each bringing grim news of viral spread—before the state received a tenth of that number.

When I e-mailed the Strategic National Stockpile, a spokesperson emphasized that the role of the S.N.S. was “to supplement”—her emphasis—“state and local supplies during public-health emergencies,” not to fulfill everyone’s needs. But how many N95s were there in the stockpile to start with? The answer was thirteen million. New York and California, between them, have about three million health-care workers. If a fifth of that workforce were involved in some contact with virus-infected patients, and if no more than two N95 masks were used per worker each day, the entire S.N.S. supply would last eleven days.

Our delivery mechanisms have also broken down for the people trying to measure and manage the crisis. In this effort, the most important tool is the detection kit. At a population level, detection enables mapmaking: quantifying the size and the sources of an infection and tracking its movements. For an individual patient, it enables plan-making: assessing whether you’ve been infected and should be isolated, and tracing whom you’ve put at risk. In the later stages of a pandemic, the ability to test on a wide scale allows agencies to concentrate on hot spots and contain them with limited, local lockdowns.

The C.D.C., which had known about the Wuhan outbreak since December, started making detection kits in January. According to reporting from the Washington Post, on February 8th, one of the first C.D.C.-made detection kits for the new coronavirus, freshly approved by the Food and Drug Administration, arrived at a public-health lab in Manhattan; it contained a set of chemicals, or reagents, meant to isolate the virus’s genetic material, and a set of three “probes” to amplify the material and then determine whether it was from the coronavirus. Time and again, technicians in New York found, one of the probes—probe N3—registered false positives: even distilled water triggered a positive result.

As the days dragged by, researchers at the C.D.C. tried to rejigger the test and make sure that its results were reliable. (The F.D.A. says that the original design it approved had performed well; the trouble arose when additional lots of the kit were manufactured.) Although the World Health Organization had distributed a quarter of a million tests, manufactured by a German lab and widely used elsewhere, the F.D.A. had authorized only the C.D.C. kit. When labs at American hospitals and elsewhere devised detection assays of their own, the agency prohibited their use until an “Emergency Use Authorization” had been applied for and granted.

“Could we cut it short today? I need a little me time.”Cartoon by Mick Stevens

The “Emergency Use Authorization” protocol, less demanding than the ordinary approval process, was designed to make the agency nimbler, while preventing people from peddling useless tests, drugs, or devices during an emergency. Yet, for some researchers, it would prove to be a roadblock in itself.

I spoke to Alex Greninger, the assistant director of the virology lab at the University of Washington. It’s one of the largest virology labs in the country, and researchers there began developing a test just days after the first case of covid-19 was detected on American soil—a thirty-five-year-old man who appeared at a clinic in Snohomish County, Washington, on January 19th, coughing and feverish.

Greninger, a square-jawed athletic figure who favors hoodies over suits, didn’t blame anyone at the C.D.C. or the F.D.A.; in fact, he told me that he found the officials “extremely responsive and easy to work with.” As he described the situation, it was the process that failed. For Greninger’s team, devising a lab test for the new coronavirus, SARS-CoV-2, wasn’t particularly difficult: its genomic sequence was already available, which made it possible to design the right probe for detecting the viral material. Securing samples of that material to validate the test wasn’t easy, but Greninger found a way. The next step was getting the F.D.A. to permit its use. He and his colleagues spent almost a hundred hours filling out a baroque, thirty-page form, filing the authorization request on February 19th. Still no dice: he had e-mailed the material, and the F.D.A. insisted that he print it out and mail a hard copy, along with the digital file in physical form, such as a thumb drive or a CD, to a separate “documentation” office. (This requirement was later withdrawn.)

“They worked as efficiently as they could,” Greninger said, “but the hard copies probably increased the turnaround by several additional days.” (The F.D.A. says that, on the contrary, it reviewed the electronic application immediately.) What gave the matter particular urgency is that the bulk of patient testing is done by commercial clinical labs or academic labs, and the C.D.C. initially distributed its kits only to “C.D.C.-authorized” military and state and county public-health labs, which do a fraction of over-all testing. Meanwhile, the infection spread on flights and in movie theatres and during visits to grandparents, seeding itself in other cities and states: New York, New Jersey, Louisiana, Connecticut. Yet, by the last week of February, only a few hundred tests per day were being performed. On February 28th, Greninger and colleagues sent a letter to Congress, noting, “No test manufacturer or clinical laboratory has successfully navigated the E.U.A. process for SARS-CoV-2 to date.”

The next day, the F.D.A. relaxed its position, allowing “high complexity” clinical labs to test for virus infection in advance of agency review and approval. A simplified E.U.A. form was soon made available. Greninger e-mailed me two versions of the E.U.A. application. The original one, from January 19th, was thirty pages and filled with dense boilerplate. “In the first version,” Greninger told me, “they suggested the lab test twenty-five positive cases. But when we were looking at this, in mid-February, there were only fourteen confirmed cases in the U.S.” This posed a metaphysical question: How can one validate an emergency test before an emergency occurs? The F.D.A. duly worked with the C.D.C. and the N.I.H. to make more viral samples available, lowering the hurdles for test validation without compromising the quality of the test. A later version of the E.U.A. form, from March 7th, was just seven pages. Between February 28th and March 1st, Greninger’s team worked around the clock to prepare the virology lab for testing hundreds of patient samples. By Monday, March 2nd, the lab had begun its first tests. A full forty-three days had passed since that covid-19 patient turned up in Snohomish County.