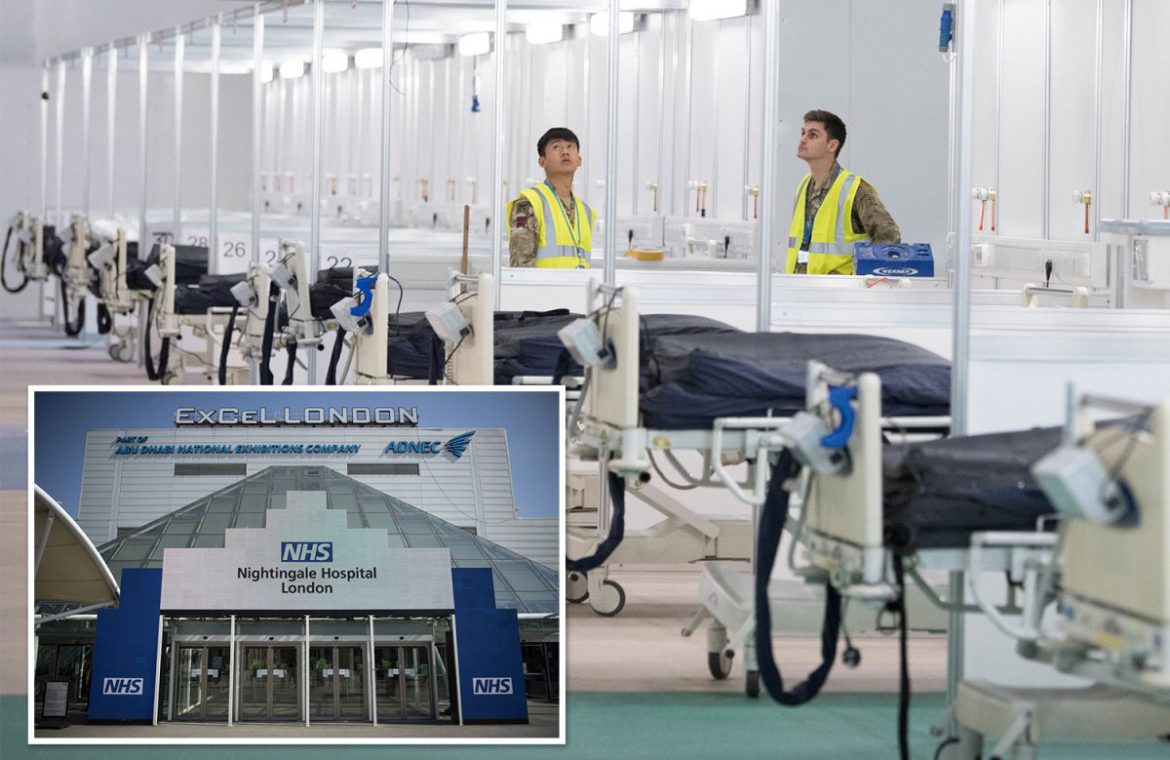 LONDON’S NHS Nightingale Hospital is being “wound down” after no new coronavirus patients were admitted in the last week, reports say.

Frontline workers at the field hospital were reportedly told today that a decision on its future would be made within days.

NHS Nightingale was the first facility of its kind constructed to help Britain fight against the pandemic, being built in just nine days and before being opened by health secretary Matt Hancock and Prince Charles on April 3.

It paved the way for more of the temporary hospitals to be built around the country, such as in Birmingham and Harrogate.

Earlier this month during the peak of the pandemic, the hospital – which is designed to include almost 4,000 beds – reportedly had 35 patients.

But on Friday there were only 19 patients – and no new admissions in the last week, according to The Independent.

It is understood hospitals in London are increasingly choosing to keep coronavirus patients in their own intensive care units.

One source told The Independent London’s Nightingale was in effect being “wound down”, with staff from the Royal London Hospital, who were due to be seconded to work there, told they were no longer needed on Friday due to the small numbers of patients.

NHS workers prepare a line of ambulances outside at the NHS Nightingale Hospital at the ExCel Centre in London on April 14Credit: PA:Press Association

Approximately 200 staff were reportedly gathered in the boulevard area of the ExCel conference centre in east London on Friday afternoon, where chief operating officer Natalie Forrest explained the challenges facing the hospital.

She told staff discussions had started on the future of the hospital and that a final decision would come “sooner rather than later” within the next week.

The decrease of coronavirus patients being admitted and treated at NHS Nightingale have left many questioning whether it is sustainable to keep the ExCel centre open.

Many other hospitals in London have bed space to treat COVID-19 patients due to the emergency response to increase capacity early in the pandemic.

Local hospitals argue their patients are safer staying staying put, as they can offer services NHS Nightingale can’t – such as surgery and specialist treatments.

But a large number of those hospitals are still running at emergency level – and would largely benefit from the NHS Nightingale staff being recycled to offer additional frontline support.

The Sun has launched an appeal to raise £1MILLION for NHS workers. The Who Cares Wins Appeal aims to get vital support to staff in their hour of need.

The Sun is donating £50,000 and we would like YOU to help us raise a million pounds, to help THEM. No matter how little you can spare, please donate today here: www.thesun.co.uk/whocareswinsappeal.

Insiders believe the field hospital may be either repurposed for use as a step-down facility for recovering patients, or mothballed but retained for any potential second waves of infection after the UK’s lockdown is lifted.

One source close to the operation of the Nightingale hospital told the paper “As an initial idea, the Nightingale made a great deal of sense. The rationale for that is receding quite rapidly. We are having to think about what to do next.”

They added: “There are still patients and staff are still caring for patients but there have been no admissions in the past week. The numbers are going down.”

The insider claims come just days after it was reported coronavirus patients were being turned away from the NHS Nightingale hospital in London because it did not have enough staff to look after them.

Leaked NHS documents reportedly show that the field hospital had turned away more patients than it has treated.

“It is thanks to the sacrifice of Londoners who stayed at home and followed social distancing rules that we haven’t needed to expand our capacity.”

A nurse prepares to take a sample at a Covid-19 drive-through testing centreCredit: PA:Press Association

We are urging Sun readers to sign a petition calling for our NHS staff to be awarded the George Cross.

We are backing a proposal by Lord Ashcroft to honour our health heroes with the gallantry gong given for acts of bravery that did not take place in battle.

A No10 spokesman said: “The NHS is doing a fantastic job and the nation will want to find a way to say thank you when we have defeated this virus.” SAS hero Andy McNab added: “The award of a George Cross would show an emotional appreciation.”

We are asking our readers to please sign the petition below.

Inside London’s ExCel coronavirus hospital the NHS Nightingale for 4,000 patients