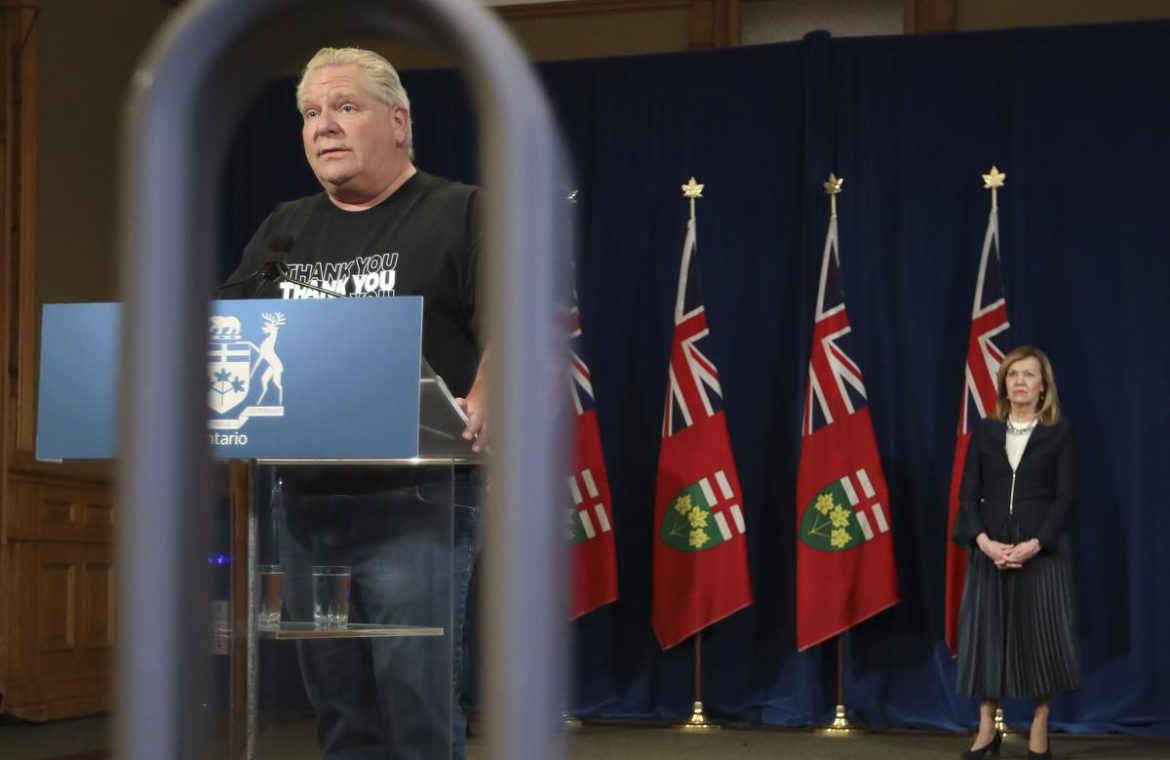 Ontario lacks crucial information on the spread of COVID-19 in the community that is needed to allow more businesses to open safely, scientists and opposition parties are warning.

Critics are calling on Doug Ford’s government to do more broad-based testing as the premier outlines a path Thursday for a further easing of restrictions.

Measures are expected to include the opening of golf courses, marinas and parks as early as this weekend with more retailers to come in addition to garden centres opened last weekend and curbside pickup at stores with street entrances.

“The testing information we’ve been getting doesn’t really paint a clear picture of the actual number of infections that we have,” epidemiologist Todd Coleman of Wilfrid Laurier University said of the daily tally of new cases.

A concentration of testing on nursing homes, health-care workers and people with more serious symptoms has left unclear the extent of community spread given that those with no or mild symptoms can transmit the illness — particularly as Ontarians begin to circulate more.

“Not having a fully accurate picture of what we’re seeing in terms of actual infections means that any decisions are being made on information that’s incomplete,” said Coleman, an assistant professor of health sciences and a former public health official in London, Ont.

“I don’t feel entirely confident that this is under control.”

Green Leader Mike Schreiner warned a lack of widespread testing is “a recipe for workplace outbreaks, which will put the reopening we all want at risk.”

Health Minister Christine Elliott acknowledged the concerns Wednesday and said a plan is coming, with wider testing to begin once nursing homes, retirement homes and other group living settings are tested.

“It’s going to be very important as we open up parts of our economy that we do that surveillance testing in the community so we understand…the health impacts,” Elliott said.

“If there’s any concerns with what has been moving forward… we’ll have to stop, reassess and make changes from there.”

Ford wouldn’t set timelines Wednesday for the next stage of businesses to open, but said the first would be “low risk” and seasonal.

“It all depends on the numbers,” he added. “If the numbers are going down and we see a downward trend, not just for a few days but over a couple of weeks, then we’ll be able to make a move.”

Ontario’s associate medical officer of health said things are on the right track.

Daily increases in new confirmed cases of COVID-19 were a relatively low 1.5 to 1.8 per cent in the last five days and the effective reproduction rate of the virus was below one across the province last week, Dr. Barbara Yaffe told a daily medical briefing where the Ministry of Health reported 329 new cases as of Tuesday at 4 p.m.

Statistically speaking, the reproduction rate means each new case is being spread to less than one additional person, a change from exponential rates of growth seen earlier in the pandemic.

“These are very encouraging trends but, of course, we need to see this continue a little longer,” Yaffe cautioned.

The new testing strategy may not be as broad-based as some observers expect, however.

“We’re looking more at vulnerable groups and people who are more at risk of serious complications rather than looking at groups that might have more exposure,” such as grocery store or pharmacy employees, Yaffe said.

Coleman said testing too specifically risks missing outbreaks that can occur more generally — a stated goal in the province’s framework for emerging from the stay-at-home shutdown that began in mid-March.

The number of new cases daily is “a function of who is being recommended for testing and right now we know that isn’t everybody,” he added, acknowledging it is a judgment call to decide who should be picked for broad-based testing.

“Think of it in terms of polling when we’re in an election. You can test a random selection of people to get a reliable plus or minus estimate.”

Since January, labs in Ontario have processed 475,058 tests — just over three per cent of the population. While labs can now process more than 20,000 tests a day, the province has often not been able to take advantage of its full lab capacity.

That hampers getting a better picture of the virus with the missed opportunity numbering more than 100,000 tests on a cumulative basis.

Labs across Ontario processed 15,137 tests Tuesday, the latest day for which figures were available.

Don't Miss it UK Coronavirus news live: Latest updates and deaths as antibody test approved for use
Up Next How to relax lockdowns without risking a second wave | COVID-19 Special