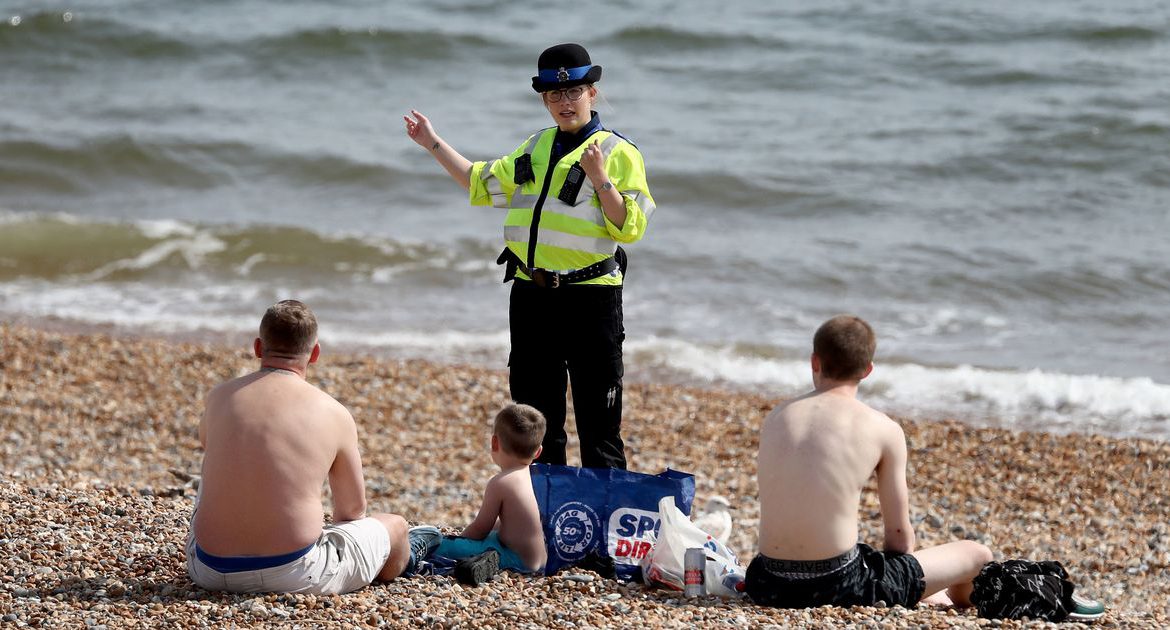 More than 14,000 fines have been issued to people flouting the coronavirus lockdown rules, says the National Police Chiefs’ Council.

And it appears London, some of the Home Counties and Yorkshire are the worst areas for so-called ‘covidiots’.

Of the 43 regional police forces in England and Wales, the Metropolitan Police has recorded the highest number of fines, with 906, followed by Thames Valley Police, with 866, and North Yorkshire, with 843.

Eighty per cent of the fines were given to men and more than half were issued to people under 30.

A police officer tells people to leave Brighton beach earlier this month before the restrictions were eased
(Image: PA)

The fines were all handed out before lockdown regulations were relaxed in England from Wednesday.

Provisional data released on Friday shows 13,445 fixed penalty notices (FPNs) were recorded by forces in England between March 27 and May 11, while 799 were issued in Wales in the same period – a total of 14,244.

Of these, 862 were handed out to repeat offenders.

Penalties were set at £60, reduced to £30 if paid within two weeks, with the fine doubled for each repeat offence up to a £960 maximum.

National Police Chiefs’ Council chairman Martin Hewitt said: “The vast majority of people continue to do the right thing, which protects the NHS and helps save lives.

“The figures show our approach is proportionate, with just 0.02% of the population in England and Wales being issued with a fine.”

Meanwhile, police chiefs and prosecutors have apologised after dozens of people were wrongly charged under new coronavirus laws.

The Crown Prosecution Service (CPS) admitted all 44 charges brought under the Coronavirus Act between March 27 and the end of April were incorrect, including 13 wrongful convictions.

The legislation allows officers to remove or detain a “suspected infectious person” for screening and assessment.

And 12 charges under the Health Protection Regulations 2020, which give police powers to break up gatherings and fine people breaching restriction of movement rules, were also wrong.

It comes after the CPS launched a review of all 231 prosecutions, including 228 charged by police, under coronavirus legislation in England and Wales, which have either been stopped or ended in a conviction, following errors highlighted by journalists, lawyers and campaigners.

Mr Hewitt said: “We do of course apologise if anybody ended up in court who shouldn’t have been there.”

Asked if he was worried some of the errors went entirely unnoticed as cases went through the courts, and led to wrongful convictions, CPS service director of legal services, Gregor McGill, said: “I apologise for the CPS role in that.

“Where we get things wrong it’s right that we do apologise for that, because there is quite rightly an expectation that we will get things right.”

Mr McGill said 175 out of the 187 charges under the regulations had been rightly applied, with errors coming when Welsh regulations were used in England or vice versa.

“These included people driving from London to Leicester for a party, groups drinking and misbehaving in the park, and other groups hanging around the town centre after being asked to go home by police on several occasions,” he said.

“Under the Act, all 44 charges were incorrect because they did not cover potentially infectious people, which is what the legislation is intended for.”

He said 38 of the 44 charges had been brought alongside other offences, including assaults on emergency workers, theft and burglary, while 31 of the wrongful charges were withdrawn in court.

Some 13 resulted in wrongful convictions, said to have typically been dealt with by “financial penalties”.

Those have been returned to court to be withdrawn, with 11 of the 13 substituted with charges under the regulations.

Raj Chada, head of the criminal defence department and a partner at firm Hodge Jones & Allen, told PA: “These figures are astonishing but not surprising.

“It has been clear from the outset that the legislation and rules were vague and incoherent, with guidance confused and inadequate.

“The Government should have been clearer about what was prohibited and officers needed to be better trained to understand what powers they were using.

“It was not so much engage, explain and encourage, but misunderstand, misapply and mistake.”

Kirsty Brimelow QC, a barrister at Doughty Street Chambers, added: “The CPS has displayed strength of leadership in carrying out this review.

“But the results are a shocking reflection of poor leadership and guidance by police chief constables, some of whom very publicly encouraged over-zealous policing by misstating the law.

“In turn, the chief constables acted on the messages from politicians rather than focusing on making the law clear to the police on the street.”

Mr McGill described the “immense pressure” on police and prosecutors as the new laws came into force within 72 hours.

But he added: “I don’t want that to seem like I’m dismissing the concerns, I am concerned, there’s an expectation that we should get things, and that’s absolutely right, and where we don’t we should apologise, be open and transparent about what’s gone wrong, and be open and transparent about what we are doing to try and make sure it doesn’t happen again.”

Don't Miss it She’s 108, Lived Through the Spanish Flu and Just Beat Covid-19
Up Next Canada’s ‘inevitable’ second wave of COVID-19 will expose surveillance blindspots: experts