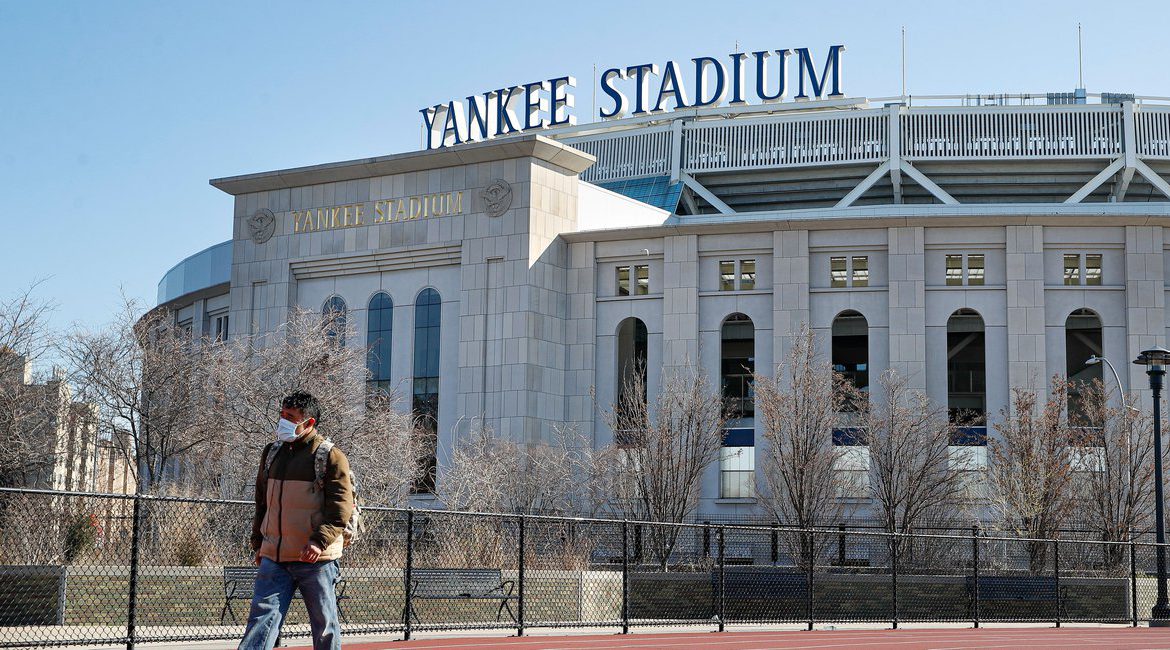 This is our daily update of breaking COVID-19 news for Monday, May 18th, 2020. Previous daily updates can be found here, and up-to-date statistics are here.

Read our guide to understanding New York on PAUSE, NY’s stay-at-home order, as well as what the upstate reopening means; a look at preparing for the spread of coronavirus is here, and if you have lingering questions about the virus, here is our regularly updated coronavirus FAQ. Here are some local and state hotlines for more information: NYC: 311; NY State Hotline: 888-364-3065; NJ State Hotline: 800-222-1222.

1:30 p.m. Governor Andrew Cuomo on Tuesday said he was strongly urging professional team sports to resume as New Yorkers head into a summer with the prospect of limited activities and having to maintain social distancing.

“I’m very aggressive on encouraging sports teams to start and to operate without fans,” Cuomo said, during a press conference in Long Island. “To the extent they can start, I encourage them to start. The state will work with them to start.”

“It’s another reason to stay home as opposed to go out,” he added.

Cuomo has previously called on sports like baseball to resume, although he has acknowledged that each league has to contend with its own “financial calculus” on playing without any fans in the seats. A recent ESPN survey of sports fans found that 56 percent said they would watch live sports again on TV, and 76 percent said that they would support the return of sports without fans in the stands if social distancing measures were put in place for the players.

On Saturday, the governor announced that the state’s horse racing tracks, including the Aqueduct Racetrack in Queens and Belmont Park on Long Island, would be allowed to reopen on June 1st without spectators.

For the first time in history, Belmont Stakes will kick off the Triple Crown beginning on June 20th, prior to the Kentucky Derby and the Preakness Stakes. Those races have been moved to the fall.

Race car driving in the state will also make a return. On Saturday, Cuomo said the Watkins Glen International racetrack near Seneca Lake could resume holding car races. Prior to the pandemic, the venue was set to host a NASCAR race in August.

In the wake of the debate around sports, much of the focus has been on America’s pastime. Baseball players and executives have reportedly been in talks about a possible Opening Day, which normally is held in the spring. Scott Boras, a prominent attorney for baseball players, wrote an op-ed for the New York Times earlier month, saying, “I am in constant communication with players, owners and front-office executives, and from what I am hearing, they are focused on getting baseball back.”

Cuomo, who entered Tuesday’s press conference wearing a mask, also said he would permit local governments to hold ceremonies with 10 people or less to honor veterans on Memorial Day.

“This is important to many, many families across this state and nation,” he said. “It’s important to the veterans that they be recognized.”

Reflecting the continued decline in hospitalizations, the governor said that the state will also allow visitors to return to 16 hospitals under a pilot program.

Since March 18th, the state has barred most hospital visitors to reduce the risk of possible infections. In New York City, nine hospitals, including Lenox Hill, New-York-Presbyterian in Lower Manhattan, and Mount Sinai, will allow visitors. Those visitor must wear personal protective equipment, including masks, and will be subject to temperature checks.

11:30 a.m. Mayor Bill de Blasio announced on Tuesday that he now supports offering line-of-duty benefits to the families of municipal workers who died of COVID-19, reversing his opposition to the local expansion from just a few weeks ago.

The city has lost at least 270 public employees to the virus so far, prompting a host of elected officials to demand that de Blasio and Governor Andrew Cuomo extend the death benefits to their survivors.

De Blasio, who previously claimed the federal government should fund the program, said on Tuesday that he would push the state to authorize the benefits, calling it the “right thing to do.”

“We’ll work with all of our partners in Albany to get this done,” he said. “We need to take this weight off the shoulders of the families of these valiant New Yorkers.”

The MTA announced last month that it would pay $500,000 to the families of workers that died from COVID-19, as well benefits to the worker’s spouse and dependents for three years. As a stopgap measure, de Blasio had previously extended health insurance for another 45 days to the families of those who died from the virus.

Families of all city employees — not just uniformed workers — should be eligible, according to the mayor. It’s unclear how much the project would cost.

Also on Tuesday, the mayor delivered an urgent plea for New Yorkers to donate blood, warning of impending shortages at hospitals across the city.

“This is absolutely a reason to travel,” the mayor said. “Anyone who can, we need you.”

The city’s blood banks are normally buoyed by corporate and religious blood drives, which have been largely cancelled due to the pandemic. Over the weekend, the New York Blood Center declared a “blood emergency,” estimating it had only two days worth of supplies.

The center, which supplies blood to the city’s public hospital system and many of its private hospitals, notes on its website: “There is no data or evidence that this coronavirus can be transmitted by blood transfusion. In fact, there have been no reported cases of transfusion-transmission for any respiratory virus, including this coronavirus.”

Those interested in donating can schedule an appointment here, or call 800-933-2566.

Suffolk County executive Steve Bellone on Monday tweeted a locals-only policy for county beaches, saying that the rule “reflects the reality that there will be reduced capacity since other municipal beaches outside of Long Island will remain closed at this time.”

In Suffolk, Cupsogue County Beach in Westhampton and Smith Point County Park in Shirley are among the beaches slated to open by Memorial Day. Some county-run beaches such as Shinnecock East and Montauk County Park have stayed open without lifeguards.

This policy reflects the reality that there will be reduced capacity since other municipal beaches outside of Long Island will remain closed at this time.

On Tuesday morning, Nassau County Executive Laura Curran announced that she would sign legislation making the only county-operated beach, Nickerson Beach, for locals only.

As County Executive, my number one priority will always be the health and safety of our residents.

Really glad beaches can be open next weekend BUT if NYC beaches are closed, it will create a chaotic and untenable situation on Long Island. For the good and health of all New Yorkers, the City MUST open their beaches for Memorial Day weekend.

It is not immediately clear how the Long Island beaches will enforce the locals-only rule. But both Suffolk and Nassau County residents are eligible to buy for discounted beach passes for county-run beaches. Residents can also buy separate permits for town beaches.

Last week Governor Andrew Cuomo said that all New York beaches will be permitted to reopen on Friday before Memorial Day as long there is a 50 percent reduction on parking capacity and social distancing measures put in place. All visitors will be required to wear masks if they cannot stay within six feet of others. Areas like playgrounds and picnic spots will remain closed. The same goes for concessions.

Under the governor’s order, each municipality can decide for themselves whether to reopen but they must submit a plan for approval. Any locals-only measure would not apply to Jones Beach and Robert Moses, which are both state parks and typically the biggest beach draws in Long Island for New York City residents.

Speaking on WPIX 11 Tuesday morning, Mayor Bill de Blasio said he had spoken with the Nassau County Executive Laura Curran and did not come away with the impression that beaches in Nassau would do anything more than apply parking restrictions.

“They are going to put limits on the total number of people on their beaches,” he said. “This should not be about any ill feeling about people depending on where they come from.”

Within New York City, there has been increasing pressure to give quarantine-weary residents some respite during the warmer months.

On Monday, City Council Speaker Corey Johnson called for a plan “ASAP to allow New Yorkers to use city beaches safely this summer.”

We need a plan ASAP to allow New Yorkers to use city beaches safely this summer without creating new issues regarding over-policing and unequal enforcement. This has the potential to be a disaster without fact-based guidelines, smart planning, and clear communication.

But de Blasio has held firm in his decision, saying the threat of a coronavirus resurgence is still too great and that he does not want to see people traveling on subway and buses except for essential travel.

“In New York City, it’s just not time for beaches yet,” de Blasio said on WPIX 11 Tuesday morning. He later added: “If people want to take a beach chair and sit on the beach, fine. If it starts to seem like a typical summer beach scene, that’s what we won’t allow.”

On Monday, the mayor said the city has begun moving fencing to city beaches as a precaution. “I don’t want to activate it, I don’t want to implement it unless we need to, but we have to have it ready,” he said during his press conference.

Don't Miss it Coronavirus update: Over 90,000 dead in US as Trump looks internally for drug production
Up Next Nearly 200,000 arts workers ineligible for JobKeeper as COVID-19 hits $15b industry | ABC News