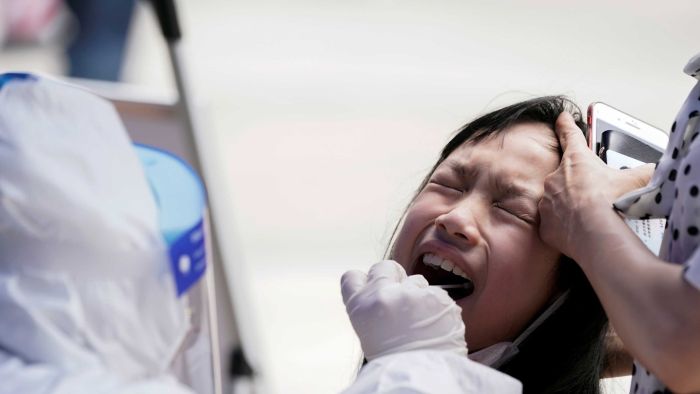 Chinese health authorities in the city of Wuhan claimed last week to have tested an incredible 1.47 million people for COVID-19 on Friday alone.

Key points:Wuhan’s Government said it tested 9 million out of the city’s 11 million residents in 10 days Health authorities have used so-called pool testing, which is quick but can sometimes lead to inaccuraciesSome residents have feared that simply turning up to be tested could expose them to infection

Some 1 million tests had been completed the previous day, authorities said, as part of a drive to test all 11 million of the city’s residents.

By comparison, as of Friday, Australia had conducted a total of 1.19 million since the outbreak began in January.

Wuhan authorities on Monday said they had managed to test 9 million people within just 10 days.

Allen Cheng, director of the Infection Prevention and Healthcare Epidemiology unit at Alfred Health in Melbourne, told the ABC that Wuhan represented “an astounding amount of testing”.

“I don’t think anyone has done anywhere near this volume of testing before,” he said.

So, how did Chinese authorities manage to achieve this? How reliable can the tests be and is testing everyone a good use of resources?

Authorities set up hundreds of testing stations in neighbourhoods around Wuhan.(Reuters: Aly Song)Coronavirus update: Follow all the latest news in our daily wrap.When and why did mass testing kick off?

Yang Zhanqiu, deputy director of the pathogen biology department at Wuhan University, told the state-run newspaper Global Times last week that Wuhan expanded the scale of its testing in April and tested targeted groups of people.

Not taking any chances, Wuhan then kicked off a campaign on May 14 to look for asymptomatic carriers — infected people who show no outward sign of illness — with the stated intention of testing all 11 million people who call the city home.

This came after authorities confirmed on May 9-10 the first cluster of COVID-19 infections in the wake of Wuhan’s lockdown being lifted on April 8.

Marylouise McLaws, a professor of infectious diseases at UNSW and member of the World Health Organization’s COVID-19 advisory panel, told the ABC that “it’s a very important study that may be able to highlight, accurately, the number in Wuhan who are asymptomatic”.

Officials set up at least 231 testing booths in neighbourhoods across the city.

They then “combed through” areas such as construction sites or markets for people not yet tested, the Changjiang Daily reported.

Some Wuhan residents reportedly expressed concern at having to line up and be tested, fearing that the very act of being tested could expose them to infection.

For the small proportion of the population unable to make it to testing centres, such as the elderly, authorities paid door-to-door visits.

A medical worker takes a swab from a resident during home visits for coronavirus testing.(AP: Chinatopix)

To test quickly, health authorities are reportedly using what is called batch or pool testing — combining samples from 10 people or fewer and conducting one test.

If the test comes up positive, all samples will be individually tested.

According to Professor Cheng of Alfred Health, “pooling of specimens is a valid strategy, but the optimal pool size depends on how often there are positives — if they are rare, then pooling 10, or even more, is an efficient use of resources.”

“But if 5-10 per cent are positive, then you can only pool a few otherwise you’ll need to re-test many individual specimens.”

Between May 14 and May 23, authorities in Wuhan have reportedly tested almost 6.6 million people, finding 189 asymptomatic cases, according to the Health Times.

Results have been made available to Wuhan residents three days after taking the test, who are informed of their results via the popular social media platform WeChat.

The campaign is expensive. Wuhan health authorities have said there is at least 1 billion yuan ($220 million) allocated to ensure all 11 million people are tested.

“It’s very ambitious, but if anybody can do it — they can do it in Wuhan,” Professor McLaws said.

“They’ve achieved remarkable milestones for controlling the virus, so just taking some samples from all of the residents is going to be a walk in the park .”

Wuhan’s program to test all of its 11 million people is underway.(AP: Chinatopix)What is the logic of testing everyone?

China on Saturday reported no new confirmed cases for the first time since it began announcing infections in January.

Chen Xi, an assistant professor at Yale University’s School of Public Health, told the state-owned Global Times newspaper that Chinese cities are more densely populated than those in the West, so it’s more necessary to address community transmission through such large-scale testing.

Wuhan’s campaign would play a positive role in preventing a rebound of the epidemic in the city, he said.

Mr Yang added that city-wide testing would allow residents of the hard-hit city feel more at ease, and speed up the process of returning to work and school.

A baby with a face shield waits to board a plane at an airport in Wuhan last week.(AP: Kyodo News)

But not everybody is in favour of the testing regime.

Wu Zunyou, an epidemiologist from the Chinese Centre for Disease Control and Prevention, told China’s state broadcaster CCTV that large-scale screening and testing was unnecessary.

Mr Wu said he believed the main battlefields were particular groups of people and vulnerable communities, rather than the public at large.

“Testing everybody might sound like a good idea but is very hard to do. Even the 100,000 test blitz in Victoria really stretched the labs, and there is the risk of coming up with false positives,” said Professor Cheng of Alfred Health.

“False positives aren’t very common, but if no-one has the infection, every positive test will be false positive.

“It is also very labour intensive to pool specimens — perhaps not such an issue in China — and there is a risk of making a mistake by introducing additional steps,” he said.

But Professor McLaws said mass testing was worth it because it would provide “a lot of very rich scientific information”.

“It’s going to answer a lot of questions,” she said.