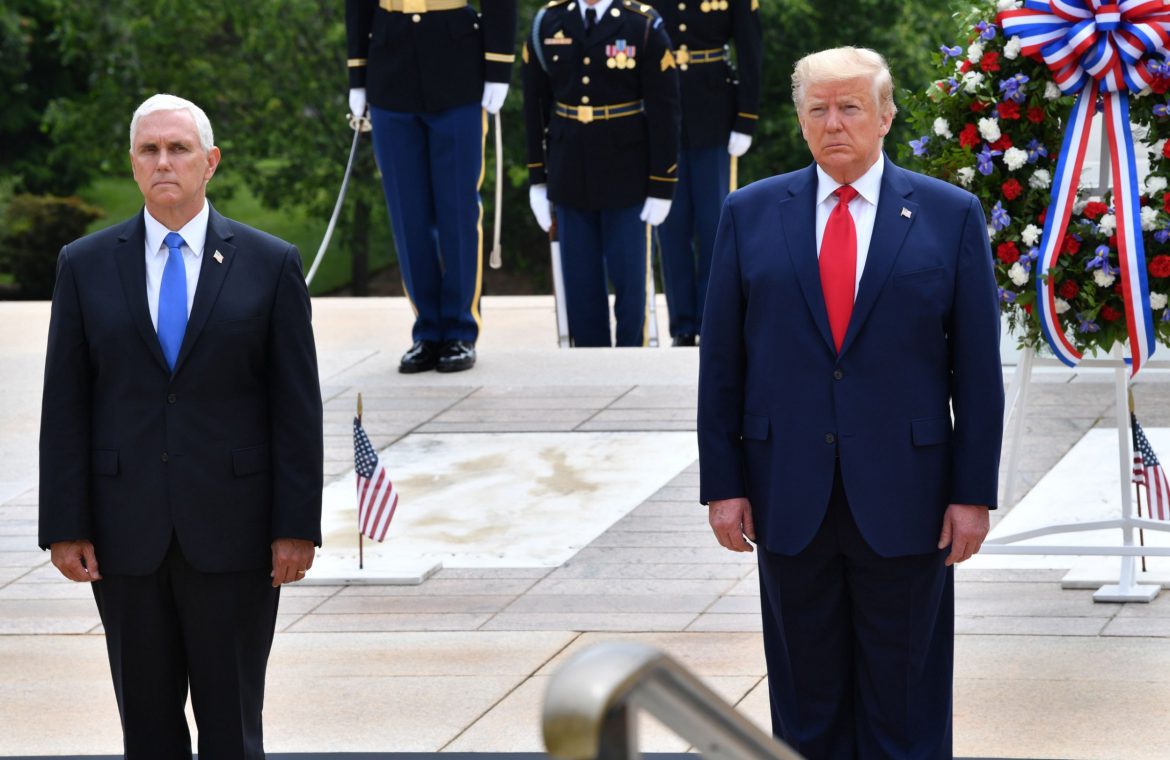 The president himself has meanwhile mocked rival Joe Biden for wearing a face mask as he left his Delaware home for the first time in weeks on Monday to lay a wreath for fallen soldiers, despite Trump declining to wear one on a visit to Fort McHenry in Baltimore.

Trump retweeted this snide post from Fox pundit Brit Hume to make the point for him:

The president had begun his Memorial Day paying his respects to the nation’s military dead at Arlington National Cemetery in Virginia, kindly taking time out from a long weekend of golf and trolling.

Presidents customarily lay a wreath and speak at the hallowed burial ground but the coronavirus crisis made this year somewhat different. Many attendees arrived wearing masks but removed them for the outdoor ceremony in front of the Tomb of the Unknown Soldier. Trump, maskless, gave no remarks. He simply approached a wreath already in place, touched it and saluted.

He then traveled to Baltimore’s Fort McHenry National Monument and Historic Shrine, the site of a famous battle in 1814 when it successfully held off an assault from the British Navy approaching from the Chesapeake bay. The venue is also the subject of one of Trump’s most famous and baffling gaffes, his claim that the US army “took over the airports” there at the height of the revolutionary war.

Speaking at the great fort, the president promised his fellow countrymen: “Together we will vanquish the virus and America will rise from this crisis to new and even greater heights. No obstacle, no challenge and no threat is a match for the sheer determination of the American people.”

He also praised the tens of thousands of service members and National Guard personnel “on the front lines of our war against this terrible virus.”

The city’s mayor Bernard C “Jack” Young had objected to Trump’s visit in advance, saying it sends the wrong message about stay-at-home directives and the city could not afford the added cost of hosting him when it is losing $20m (£16.4m) a month because of the pandemic.

He cited the disproportionate effect the virus has had on his city and called on Trump to “set a positive example” by not traveling during the holiday weekend but the latter was not dissuaded.

His objections might also have something to do with the fact that Trump last summer described a local congressional district as a “disgusting, rat and rodent infested mess” where “no human being would want to live.”

Biden meanwhile chose Memorial Day to make his first public appearance in the two months since the pandemic closed down the nation. He emerged unannounced from his Wilmington home to lay a wreath at a nearby park, with no crowd gathered to greet him. It was a milestone in a presidential campaign that has largely been frozen.

“Never forget the sacrifices that these men and women made,” he said afterwards. “Never, ever forget.”

The sight of Biden in a mask provoked ABC’s senior national correspondent Terry Moran to ask: “Do you think this is a good look for a President of the United States?” His tweet quickly went viral, but not in the manner in which he might have hoped.

Here’s Justin Vallejo on a day of contrasts.