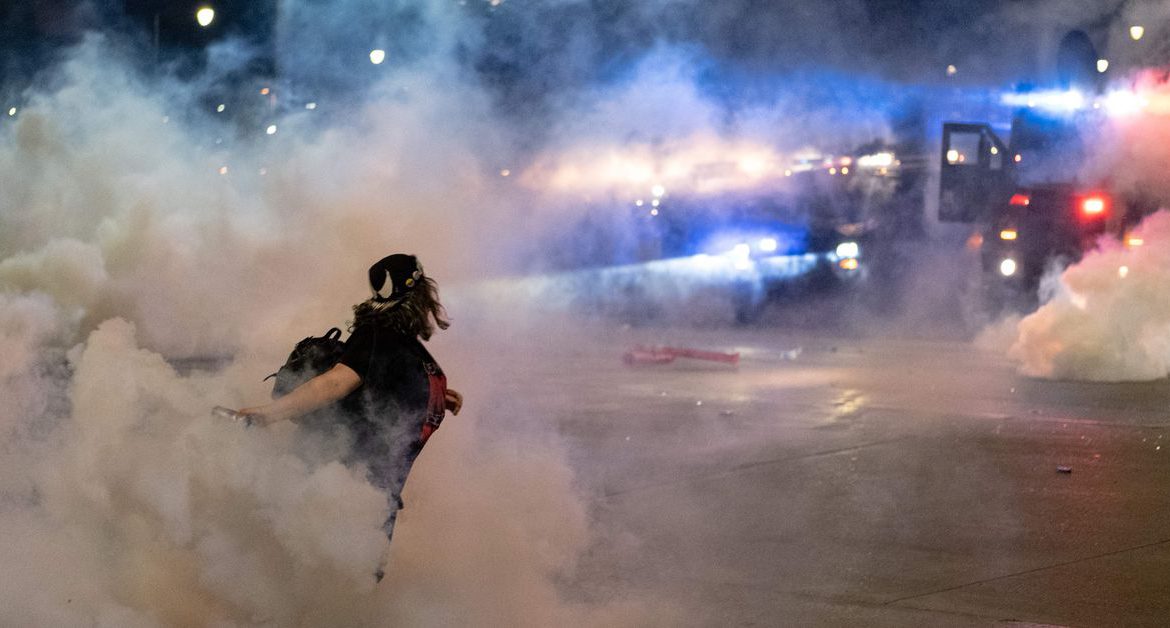 Law enforcement’s brutal response to this weekend’s protests may fuel mistrust in the health care system as the COVID-19 pandemic continues to smolder through the country.

Experts say the danger is especially acute in black communities, which have already been hit hard by the virus, and have historically borne the brunt of discriminatory policing. In the aftermath of the police response to protests, vulnerable communities may be even less likely to trust and cooperate with health officials. That could make it harder to control another wave of illness.

“This blatant display reminds folks how bad the devaluing of black lives is, at the height of a global pandemic, and it’s certainly going to lead to less willingness to engage in the system,” says Rachel Hardeman, an assistant professor and health equity researcher at the University of Minnesota School of Public Health.

People already feel less willing to engage with contact tracers in the Twin Cities, according to someone with knowledge of the Minnesota COVID-19 response, who asked not to be named because they didn’t have permission to speak with the media. It’s hard to say yet if data would back up that assessment, they told The Verge, but anecdotally, people making calls feel like they’re meeting more resistance. Contact tracers identify people with a disease like COVID-19 and figure out who they recently interacted with to stop the virus from spreading. The Minneapolis health department did not respond to a request for comment.

Large gatherings like protests already make contact tracing difficult. When people at those gatherings encounter police violence, that task gets harder. People who test positive for the coronavirus may be reluctant to tell health officials if they were at protests because they may worry about retaliation. They might not want to identify people they interacted with at the protests for the same reasons. That’s just one way mistrust makes it difficult for public health officials to track down clusters of COVID-19.

Some statements from officials are only making the problem worse. Minnesota Public Safety Commissioner John Harrington used public health terminology to describe police work and said that officers are “contact tracing” people who were arrested to find out the groups that they were a part of. The conflation between an important public health activity like contact tracing and investigation of people who have been arrested could make people less likely to trust public health workers trying to trace the disease.

This is not contact tracing! What is described in the video is police work. To see the two linked jeopardizes the credibility of public health, which needs community trust to work effectively. https://t.co/qcN7tVt4m8

Black communities, as well as communities of other people of color, already distrust the health system. Police violence is, in itself, a constant public health issue: one in every 1,000 black men may be killed by police, and seeing images of police violence is associated with poor mental health for black Americans. Discrimination by law enforcement can lead to symptoms of depression, anxiety, post-traumatic stress disorder; stress from encounters with police is also linked to risk factors for chronic diseases like diabetes and hypertension.

People who have negative encounters with law enforcement are also less likely to trust medical institutions, one study found. All public health efforts in the United States are forced to grapple with that challenge — it’s harder to engage with communities that, after decades of mistreatment, are reluctant to trust officials of any kind, including health officials.

“It’s one of the many ways that this sort of violence impacts health and well being,” Hardeman says.

Finding solutions to those issues is even more significant during a pandemic. Instead, law enforcement created environments that are bad for public health. Police officers in Detroit, Los Angeles, Philadelphia, and other cities used disease-exacerbating tactics like tear gas and pepper spray — and carted hundreds off to crowded jails, which are known transmission vectors for COVID-19. Tear gas and pepper spray make people cough, a risk factor for spreading a respiratory disease. Many officers didn’t wear masks and herded protesters into close quarters. The strategies are health threats at any moment, but are even more dangerous against the backdrop of the novel coronavirus — and at a time when health officials need community engagement.

It’ll be difficult to tell how much of the suspicion of public health officials that people may see in the next few weeks was already there and how much is new, Hardeman says. “It’ll be hard to tease apart … which pieces bubbled up further because of what’s going on,” she says. But the violence from police officers during ongoing protests highlight and strengthen the reasons for the existing suspicion.

Adding community health workers to the COVID-19 response could help bridge gaps between black communities and public health, Hardeman says. “They can bring folks along and keeping them safe, while also not devaluing their lived experiences of feeling this mistrust, because this mistrust is warranted.”

It’s difficult to act as a representative of a local government when that government is under such an unfavorable lens, the person with knowledge of the COVID-19 response in Minnesota told The Verge. It’s hard to expect that people would be open to working with you when they’ve witnessed violence from other government workers. “We’re supposed to be on the same side protecting the public,” they told The Verge. “It’s just a horrifying incident.”

Don't Miss it I thought my family and I could still travel to Italy as coronavirus took hold. I was wrong
Up Next Coronavirus spreads to India and Philippines | DW News