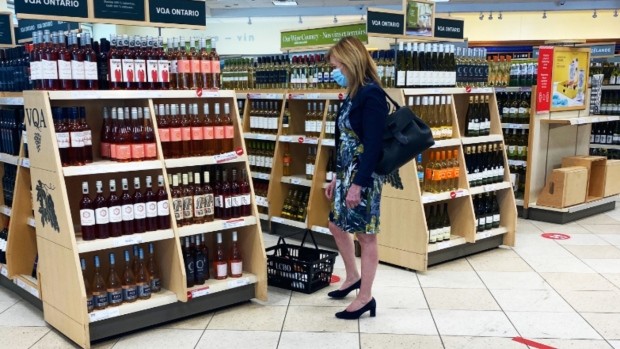 Ontario’s health minister says she was following the advice of medical professionals when she decided to shop at a Toronto LCBO on Wednesday afternoon while awaiting her COVID-19 test results.

Elliott and Premier Doug Ford, who have since tested negative for the virus, underwent COVID-19 testing on Wednesday after learning that the province’s education minister, Stephen Lecce, had earlier come in contact with someone who tested positive for the virus.

Ford and Elliott, who had held a joint press conference with Lecce one day earlier, decided to skip their daily briefing at Queen’s Park on Wednesday afternoon out of an abundance of caution.

Elliott also cancelled an appearance at a Brampton mobile testing site that was scheduled for 3 p.m.

Lecce released a statement shortly before 2 p.m. on Wednesday confirming that his test results had come back negative and about an hour-and-a-half later, Elliott was seen shopping at an LCBO near Dupont Street and Spadina Avenue.

A photo sent to CP24 shows Elliott, who is wearing a surgical mask, standing beside a basket and looking at the store’s VQA wine selection.

“Minister Lecce’s results came back negative before I went for testing and so while there was no real need for me to go to be tested, I had made a public commitment to do so and so that’s where I went,” Elliott told reporters at Queen’s Park on Thursday.

“I went and while I was at the assessment centre having the test, I was advised that because I had not directly been in contact with anyone with COVID that I did not need to self-isolate…That was the medical advice I was given and that is what I did and my test results came back negative of course.”

Elliott and Ford returned to Queen’s Park for their daily COVID-19 update on Thursday afternoon.

“To be clear, both Premier Ford and Minister Elliott have had no known contact with anyone who has tested positive for COVID-19, and as a result, there is no need for either of them to self-isolate,” a statement from the premier’s office read.

Lecce’s office confirmed Thursday that he will continue to self-isolate.

“Minister Lecce is feeling well and continues to work from home. He is following the advice of his doctor by continuing to monitor for any symptoms,” a statement from the education minister’s office read.

“Out of an abundance of caution, although the exposure risk was extremely low, he will be self-isolating for the remainder of the 14 days since the time of exposure, on June 6. The Minister again would like to offer his sincere thanks to the team at UHN and everyone yesterday who sent positive thoughts and messages.”

Public health experts have cautioned that negative test results are not always an indication that a person isn’t infected with the virus, especially when tests are conducted a short time after exposure.

While Toronto Public Health does not advise people to self-isolate while waiting for results if they have no symptoms and have not been in close contact with a positive case, officials say anyone who has received a negative test result should continue to physically distance from others, wear a cloth mask or face covering when physical distancing is not possible, clean your hands frequently, and continue to monitor for symptoms.

Don't Miss it Where Australia stands in the COVID-19 “first movers” group | The World
Up Next Live Coronavirus Updates: Schools Face Hurdles