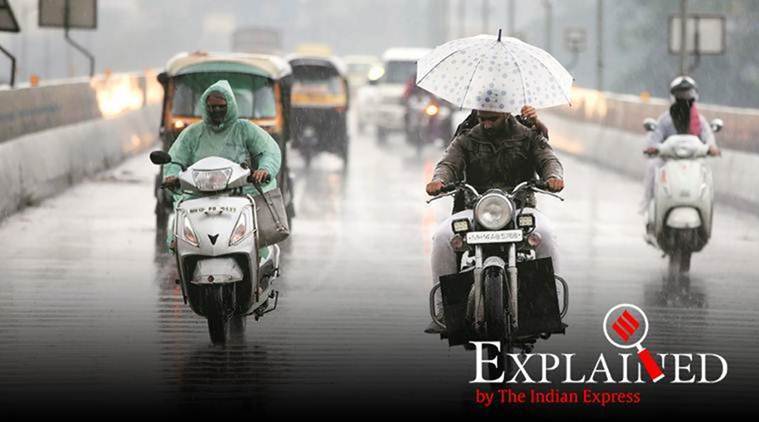 Rain brings with it several vector borne diseases like malaria, dengue and chikungunya. In the case of dengue, some studies have shown that excessive rains could disrupt the mosquito’s reproductive cycle and flush out its breeding sites. (File)

Some months ago, when the novel coronavirus epidemic was still emerging in India, it was hoped that rising temperature in the summer months would weaken the potency of the virus and slow down its spread. That did not happen. Now that the monsoon season is here, the likely impact of rain on the virus, and its transmission, is the subject of discussion.

Since it is a new virus, scientists are not yet sure how the rain might affect its behaviour. So the effort is to look for clues in the way other similar viruses behave during the rainy season.

Don’t miss from Explained | How India tests for Covid-19

Rain brings with it several vector borne diseases like malaria, dengue and chikungunya. In the case of dengue, some studies have shown that excessive rains could disrupt the mosquito’s reproductive cycle and flush out its breeding sites.

But the comparison that is being made is that with influenza, which, like Covid-19, is a respiratory disease, though there are important differences in the way the two viruses replicate and affect human beings.

The problem, as Dr Marc-Alain Widdowson, an infectious disease epidemiologist who worked with US Centers for Disease Prevention and Control and is now Director of the Institute of Tropical Medicine, Antwerp, Belgium, points out, is that even in the case of influenza, and several other viral respiratory diseases, the drivers for their seasonal behaviour are not fully understood.

“In the United States, for example, it is very difficult to predict the flu season. There is no single factor like temperature or rainfall, or staying indoors that can be said to have decisive impact. Many other factors like sunlight, and Vitamin D levels in people are also responsible in how these diseases spread. In addition, it is not very clear how much transmission happens through surfaces (as against human contact, or through air). Most people are of the opinion that only little contamination happens through surfaces. And, that during the rainy season, it would not affect indoor surfaces at all,” he said in an email.

Dr M S Chadha, former Deputy Director of National Institute of Virology who has worked on the seasonality of the respiratory synctial virus (RSV), said it could take several years to determine how novel coronavirus is affected by different seasons. “Since RSV infection and other respiratory diseases usually do follow seasonal patterns, carrying out year-round Covid-19 surveillance for several years would be the key to determining its seasonality,” he said.

Dr Subhojit Sen, a scientist with Centre for Excellence in Basic Sciences in Mumbai, said the viral disease spread depends on three major factors — seasonal changes in environment (temperature, humidity, sunlight), human behavioural patterns, and intrinsic characteristics of the virus, like its infectiousness, pathogenicity and survival.

He pointed out some of the things that can be expected during the rainy season that can have an impact on how such diseases spread.

“For example, spitting on the streets is a common problem that increases the risk of virus transmission. The hope is that rains will wash or dilute this off the streets,” he said. Also, during rains, people spend an extended period of time within closed spaces, like homes or offices, and there is likely to be a lower number of people in crowded public spaces.

Don't Miss it COVID-19: Scott Morrison announces 3-step plan to reopen Australia and ease restrictions | ABC News
Up Next Your pension payment could halve in July because of COVID-19 changes to superannuation