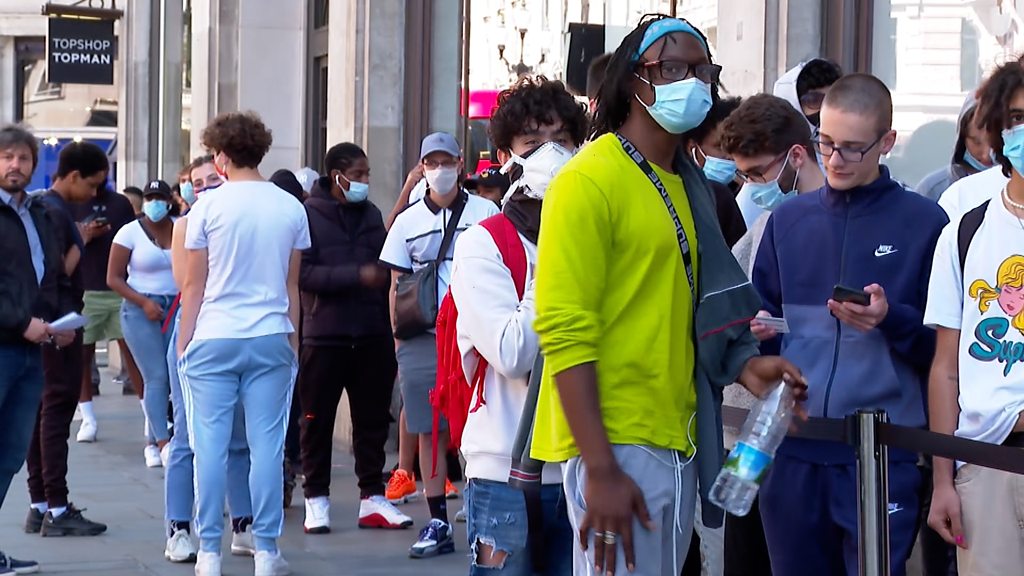 Media captionShoppers in England rush back to the High Street

The high streets, retail parks and shopping centres are buzzing with life again as the coronavirus lockdown eases across England. But in many areas public toilets remain closed. So how are people meant to spend their hard-earned pounds, when they can’t even spend a penny?

Laura Reid needs to carefully plan her shopping trips – and won’t be visiting any in a hurry.

The 27-year-old has irritable bowel syndrome (IBS) so hasn’t been to any shops since they reopened because of a lack of toilet facilities.

“The big thing for me when I go out is ‘where is the nearest loo’ because you’ve always got that anxiety in your head,” said the journalist, who lives in Barnsley.

“I’ve avoided going to the shops or supermarket for that reason.”

All shops in England are now allowed to open, but with strict safety measures.

There were big queues outside the Nike store in central London on Monday, while people queued for an hour outside Primark stores in Manchester and Birmingham.

But some tweeted to say they would not be joining them at the shops over fears not all toilets would be open.

Many of the roadside disabled toilets locked with RADAR keys are gone. Lockdown has essentially closed most other accessible toilets in shopping centres and businesses. Not fun and not useful, I won’t be going out anytime soon.

I won’t be going to the shops either. Queue for an hour to get in Primark, queue for another hour to get served, no cafe to take the weight off, no toilet. A few weeks of that and NO-ONE will want to go shopping. Watch the rules relax, then.

Jenny Williams, 80, who lives near Coalville in Leicestershire, was diagnosed with rectal cancer eight years ago and lives with an ileostomy bag.

She said she had previously been forced to rush out of a shop because of her double incontinence and so hadn’t been into Leicester since February.

“I did have a problem in a shop and I was caught short so I had to leave my shopping. I did not get home in time, so I had to change my clothes and shower,” she said.

“Even before lockdown public toilets often had long queues and when I have to go, I have to go.

“I don’t have anyone to do my shopping for me but the lack of toilets in shops is putting me off going out.”

The charity Crohn’s and Colitis UK has urged local councils and shopping centres to open public toilets “as soon as they can, if social distancing measures are safely put in place”.

Their campaigns manager, Sarah Hollobone, said: “This will not only dramatically improve the quality of life for people with Crohn’s or colitis, but also people with other conditions that require toilet access.

“People with Crohn’s and colitis already feel isolated because of their condition and locking up public toilets unnecessarily adds to this.”

Scientists in China have found that flushing the toilet with the lid up creates a cloud of spray that can be breathed in and may spread infection, such as coronavirus.

Droplets can travel up to 3ft (91cm) from ground level, according to the computer model used by the scientists from Yangzhou University.

England’s larger shopping centres all said their toilets were open but many warned customers to expect reduced capacity.

Westfield, which has two large shopping centres in London, said it was “implementing reduced entry to toilet blocks to ensure social distancing”.

Intu, which owns 16 centres in England including the Trafford Centre, said toilets and baby change areas were open but said “the number available may be reduced to support social distancing”.

McArthurGlen, which has six centres across the country including Cheshire Oaks, said its “toilets and changing facilities are regularly disinfected”.

The Bullring in Birmingham also said its toilets were open, while Liverpool One said its loos were “open at 50% capacity due to social distancing” and were cleaned every hour.

How many public toilets are there?

There is no official national database of public toilets, though the Great British Public Toilet Map lists about 11,000 which include those in shopping centres, rail stations and anywhere the public can access, as well as those that charge a fee.

Research by the BBC in 2018 found that councils had stopped maintaining hundreds of facilities across the UK since 2010.

According to the Valuation Office Agency, which keeps a database for business rates, there are just under 4,000 free-standing public conveniences in England and Wales.

230of those are in Cornwall

So people visiting shopping centres can expect facilities – with a queue. But what about the town centres where an economic boost is so badly needed?

Local authorities are not legally required to provide toilets, meaning they are often closed as councils look to cut costs, while businesses that provide toilets for their customers have no legal duty to do so for non-customers.

Raymond Martin, managing director of the British Toilet Association (BTA), has called on the government to “put some serious thought” into regulation and funding of changes to public toilets, saying they are a “human right and a human need”.

“People are coming out of their houses and they have to use the toilet,” he said.

“The government wants people to come out and spend their money but this is about health and wellbeing.

The Local Government Association said the reopening of public toilets was a local decision for councils and should follow government guidance.

“Councils will be taking individual local decisions about public toilets based on a risk assessment and whether social distancing measures can be maintained,” a spokesman said.

“People should not assume toilets will be open and plan their journeys and outdoor activities accordingly.”

“If toilets remain shut for sometime, or the queues continue to be long because of the necessary social distancing measures, then it’s definitely going to put me off going for anything I need and I’d shop online instead,” she said.

“It’s a big barrier to me in terms of accessing the high street.”

Don't Miss it Life in the Philippines amid one of the world's toughest coronavirus lockdowns | ABC News
Up Next Coronavirus cases in Victoria rise by 21, including 15 returned travellers