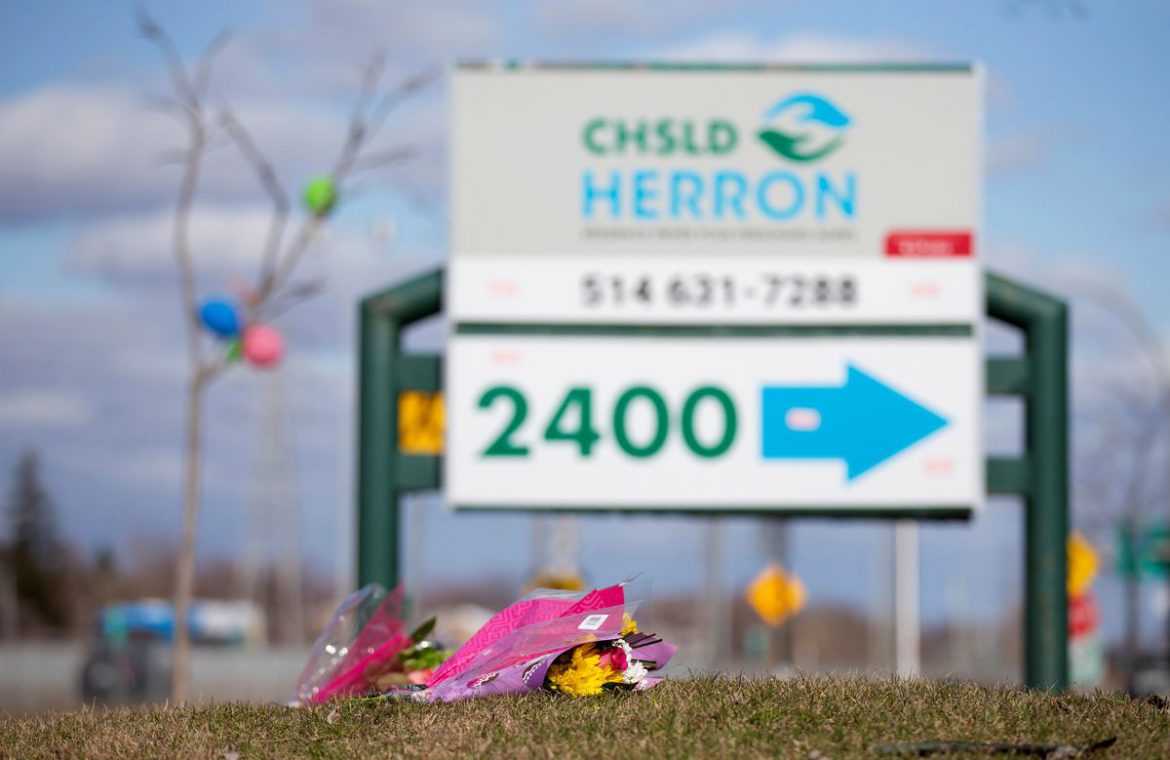 Flowers are placed outside Residence Herron, a seniors’ long-term care facility, following a number of deaths since the COVID-19 outbreak, in the suburb of Dorval in Montreal, on April 11, 2020.

Quebec’s chief coroner has ordered a vast public inquiry into the role negligence and other factors played in the thousands of deaths in Quebec residential senior care, a probe that promises to be far more exhaustive than the limited investigations already under way.

The inquiry will examine some of the 4,858 deaths in Quebec’s system of seniors’ care and housing attributed to COVID-19, along with dozens of other cases in which people died under mysterious circumstances or from violence and neglect. Deaths in long-term care facilities represent 91 per cent of Quebec’s deaths from COVID-19.

The inquiry adds to several investigations, inquests and inquiries under way into seniors’ care in Canada. where more than 80 per cent of deaths have taken place. Investigations are being conducted in Ontario and Quebec, the hardest hit provinces by far, but unions, advocates and opposition critics have called for inquiries in British Columbia, Alberta and Nova Scotia.

In the stay-at-home era, why have we so sorely neglected home care?

Before the Quebec coroner announced the new inquiry, Premier François Legault had expressed interest in a rapid investigation to find solutions before a next wave of coronavirus hits. The provincial Ombudsman had already announced an investigation into the Health Ministry’s handling of the crisis. Quebec’s coroner was also conducting an inquiry into deaths at Montreal’s Herron nursing home where at least 51 people died during since the pandemic struck, 21 of them from COVID-19. News reports about the deaths described many residents suffering from dehydration, hunger, skipped medication and being left in soiled clothing.

Chief coroner Pascale Descary said discussions with the coroner in charge of the Herron inquiry, Géhane Kamel, convinced her a wider look is required. Ms. Kamel, a lawyer, and physician Dr. Jacques Ramsay will co-chair the inquiry.

“It’s essential to dig deeper with this second level we have for an expanded view, with public debate, public hearings and a public report,” Dr. Descary said in announcing the move. “It won’t look into all of the thousands of deaths, but examine a sample of cases in a variety of venues to explore what happened and give us an idea of the scope of the problems that led to this crisis.”

Quebec’s coroner system provides for quicker private investigations and public reports into unexpected deaths from unknown causes, violence or negligence, or for larger public inquiries that can be exhaustive and take place in full view.

The inquiry will examine the period of March 12 to May 1. Dr. Descary expects hearings to begin early next year.

Peter Wheeland’s father, Ken, died of COVID-19 complications at a stricken public nursing home CHSLD LaSalle in Montreal and his mother, Connie, lived at the private Herron home at the height of the crisis. He and his sister now provide Mrs. Wheeland 24-hour care in a furnished apartment equipped for heavy care. He said the coroner’s inquiry has the best chance of making change.

“It makes sense that they looked at Herron at first and it made them realize the problem is not particular to that institution, but that it’s provincewide,” he said. “It’s government policies that led to a lot of extra deaths in long-term care homes, not a particular home.”

Marguerite Blais, the Quebec minister responsible for seniors, said the Legault government will fully co-operate with the independent coroner’s inquiry. She said it was too early to say whether other inquiries will still be conducted, saying all options are on the table. She also defended her government’s inability to protect seniors, for which Mr. Legault has apologized.

“The Quebec government did what it could facing a global pandemic with a new virus. It was deceptive. We didn’t know asymptomatic people could spread it,” she told reporters in Quebec City.

Quebec had a shortage of 10,000 personal care workers before the pandemic struck, and another 10,000 health system workers were sick during the early months of the pandemic or refused to come to work. With staff shortages, many workers carried the virus from home to home and also spread the disease into the community.

Eventually, more than 1,000 Canadian military personnel were called in to help along with thousands of volunteers. Mr. Legault has launched a hiring blitz hoping to add 10,000 new care workers by September.

Sign up for the Coronavirus Update newsletter to read the day’s essential coronavirus news, features and explainers written by Globe reporters and editors.