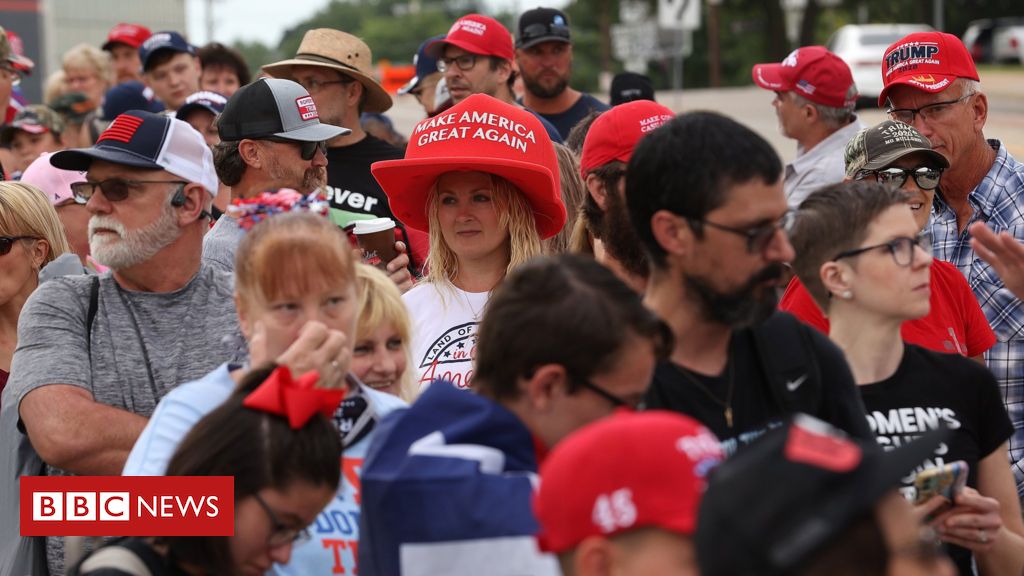 Long queues have formed outside an arena where President Donald Trump will hold his first rally since March, when the US coronavirus lockdown began.

There are concerns the event at Tulsa’s 19,000-seat Bank of Oklahoma Center could increase the spread of Covid-19.

Those attending must sign a waiver protecting the Trump campaign from responsibility for any illness.

Hours before the rally, the campaign said six staff members involved in organising it had tested positive.

The Trump campaign has said attendees will have to pass temperature checks before being allowed into the venue – and that they will be offered face masks.

More than 2.2 million cases of Covid-19 and 119,000 associated deaths have been reported in the US, according to data from Johns Hopkins University.

Mr Trump’s re-election campaign rally will be one of the biggest indoor gatherings in the US since the country’s Covid-19 outbreak began.

Campaign officials said they had received more than a million ticket requests, and that the president would speak inside the BOK Center as well as at an outdoor stage set up nearby for overflow crowds.

Supporters began queuing earlier this week for a chance to get into the arena, and 100,000 people or more were expected to gather in central Tulsa.

This week the number of new cases of Covid-19 in Oklahoma has been rising and local health officials fear the rally could become a “super spreader” event.

There will be no social distancing at the rally. And although face masks will be given out to those attending, the president will not be wearing one.

Attendees will have to accept a disclaimer that they “voluntarily assume all risks related to exposure to Covid-19 and agree not to hold Donald J. Trump for President, Inc.” liable for any illness or injury.

In a Facebook post, Tulsa Mayor GT Bynum acknowledged that Tulsa’s residents were divided over it being the first city to host such an event.

“We do this as our positive Covid-19 cases are rising, but while our hospital capacity remains strong. Some think it is great, some think it is reckless. Regardless of where each of us falls on that spectrum, we will go through it as a community,” he wrote.

Political rallies are a source of inspiration as well as invigoration for Donald Trump. He draws energy from arenas filled with enthusiastic supporters, and uses their responses to the various riffs in his sometimes long, free-form speeches to sense what issues resonate with his loyal base.

For more than three months, as Covid-19 has spread across the US, the president has had to do without these emotional and strategic sounding boards. Now, the rallies are coming back, even though cases of the virus are reaching new record peaks in many states and public health officials continue to warn of the dangers of large gatherings.

With less than five months until election day, the president is billing this as the beginning of his re-election bid. Given that he held his official campaign kick-off in Orlando almost exactly a year ago, it perhaps is better seen as a re-boot of a campaign that has struggled to gain its footing as the nation has been beset by the pandemic and mass demonstrations against institutional racism and excessive force by police.

The president is now billing his campaign around the slogan “the Great American Comeback”. Given the recent turmoil, and Mr Trump’s sagging poll numbers, he is clearly hoping the Tulsa rally is the beginning of his own political revival.

There are also concerns among officials in Tulsa that there will be clashes between supporters and opponents of the president.

Mayor Bynum declared on Thursday a curfew covering the area around the BOK Center, citing the risk of “civil unrest”. But on Friday, Mr Trump announced that the curfew had been lifted for “our many supporters”.

He also warned: “Any protesters, anarchists, agitators, looters or lowlifes who are going to Oklahoma please understand, you will not be treated like you have been in New York, Seattle, or Minneapolis. It will be a much different scene!”

Mr Trump had planned to hold the rally on Friday. But he changed the date last week after learning it fell on Juneteenth, which marks the end of slavery in the US.

Media captionJuneteenth: ‘This is such a change in history’

The choice of location is also controversial. In 1921, Tulsa was the scene of a race riot in which white mobs attacked black people and businesses.

At a peaceful Juneteenth rally in Tulsa on Friday, the civil rights activist Al Sharpton said campaigners could “Make America Great” for everybody for the first time.