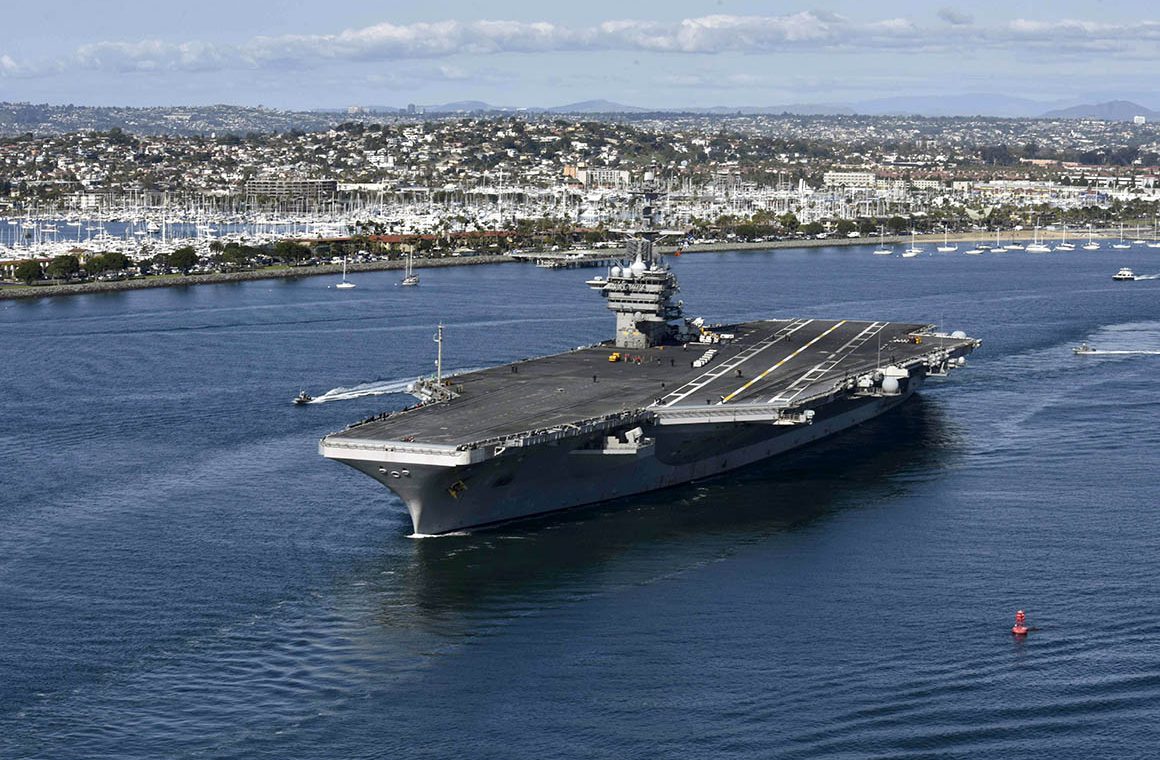 Crozier will not be eligible for future command, effectively ending his Navy career.

“Both Adm. Baker and Capt. Crozier fell far short of what we expect from those in command,” Gilday told reporters while announcing the results of the investigation. “Had I known what I know today I would have not made that recommendation to reinstate Capt. Crozier. Moreover, if Capt. Crozier was still in command today, I would be relieving him.”

The news is the latest chapter in a highly publicized chain of events that started with an outbreak of the coronavirus onboard the Roosevelt in late March, which forced the ship to stop in Guam and offload its 5,000 sailors. Crozier caused an uproar when he wrote a letter pleading for help from Navy leadership as the coronavirus spread throughout his ship, which was later leaked to the media. Crozier was fired by then-acting Navy Secretary Thomas Modly, who later stepped down over remarks he made to the ship’s crew criticizing the captain’s actions.

Gilday stressed that while the email Crozier sent was “unnecessary,” as officials were already working to secure space on Guam for the sailors before he pressed send, the leaked email is not the reason Crozier is not being reinstated. He also faulted Modly for suggesting that Crozier intended for the media to see the email.

“Capt. Crozier hit send once, he did not leak that email and he did not intend for it to be leaked,” Gilday said.

The investigation found that neither Baker nor Crozier acted quickly enough to prevent the spread of the virus, Gilday said. They were slow to remove sailors from the ship and they also failed to move sailors to available safer environments quickly, he said.

Additionally, Crozier “exercised questionable judgment” when he released sailors from quarantine on the ship, putting his crew at higher risk and increasing the spread of the virus aboard the Roosevelt, Gilday said.

The failure to act seemed to come down to an “almost paralysis” among senior leaders on the ship, Gilday said. After learning of the outbreak on the ship, Baker reportedly countered that less drastic measures should be taken.

“When obstacles arose, both failed to tackle the problem head on and to take charge, and in a number of instances they placed crew comfort in front of crew safety,” Gilday said. “Ultimately they were driven by the problem instead of driving decisions.”

In another shift in the Navy’s thinking, Gilday said while officials earlier believed that the ship was first infected by aircraft crew resupplying the ship, they now think the virus came onboard during a port visit in Vietnam in early March.

The news that Crozier is staying off the ship is a shift from the Navy’s recommendation in April. After a preliminary inquiry, the chief of naval operations recommended that Crozier be reinstated. But Gen. Mark Milley, the chair of the Joint Chiefs of Staff, was not satisfied and pushed for a broader investigation, a move that delayed a decision on reinstating Crozier, POLITICO first reported.

Crozier’s ouster in early April was met with backlash on Capitol Hill, where top Democrats have repeatedly called for the Navy to reinstate the skipper. Several Democrats criticized the Navy on Friday for not sticking with its initial recommendation to reverse Crozier’s firing.

Rep. Adam Smith, chair of the House Armed Services Committee, announced the panel was launching its own investigation into the outbreak on the carrier.

“The findings in the Navy’s extended investigation makes it clear that the Navy did not respond the way they should have, or as quickly as they should have, to adequately address the outbreak,” Smith (D-Wash.) said in a statement.

“The Department’s civilian leadership portrayed Captain Crozier’s decision-making aboard the Roosevelt as the critical weakness in the Navy’s response, but the truth is that civilian leadership was also to blame,” Smith said. “In order to better understand the full range of mistakes that were made throughout the entire chain of command, the House Armed Services Committee has launched an investigation into the COVID-19 outbreak aboard the Roosevelt.”

The top Republican on the committee, Rep. Mac Thornberry of Texas, said the Roosevelt incident makes clear “there are lessons to be learned and improvements that must be made,” but declined to call for Crozier’s reinstatement.

“I do not believe it is appropriate for Members of Congress, who are outside the chain of command, to comment on individual personnel actions,” Thornberry said. “Doing so is too often unfair to the individual service members involved and their leadership. I continue to hold that view.”

Democratic senators, meanwhile, were “disappointed that the initial recommendation to reinstate Captain Crozier has been rescinded without any major new findings of fact,” Sens. Richard Blumenthal of Connecticut and Chris Van Hollen of Maryland said in a statement. “In the absence of any solid new evidence, the perception will regrettably remain that Captain Crozier’s removal was retaliation for his email raising concerns about the safety of his sailors.”

President Donald Trump initially suggested he would get involved in the investigation, but Navy Secretary Kenneth Braithwaite said the White House did not provide any input into the decision. Defense Secretary Mark Esper, meanwhile, “upholds our conclusions.”

After recovering from Covid-19 on Guam, Crozier was moved to an administrative job in San Diego while the Navy wrapped up the broader investigation. The Roosevelt finally got underway in late May after nearly two months sidelined in Guam while its sailors fought the virus.