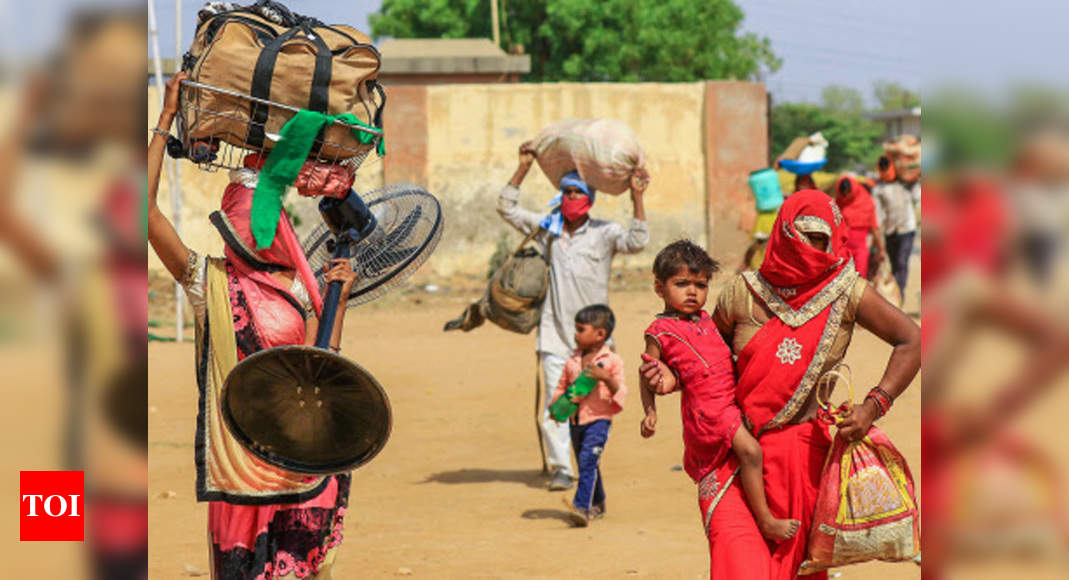 NEW DELHI: After overwhelming India’s megacities, the coronavirus is now moving through the country’s vast hinterland.
Home to nearly 70% of India’s 1.3 billion population, the nation’s villages have little access to healthcare and are struggling to support themselves through the country’s prolonged economic slowdown.
Initially isolated from the epidemic that has swamped the capital New Delhi and financial center Mumbai, rural areas were exposed when millions of migrant workers who lost their jobs in the cities when the government implemented a strict nationwide lockdown on March 25 went home.
The states of Bihar, Assam, Jharkhand, Odisha and Uttar Pradesh received the most number of returning labourers – now they are also witnessing the sharpest rise in new cases in the two weeks to June 8, according to internal government estimates seen by Bloomberg. In the rural districts of Rajasthan and Karnataka, the virus is also spreading rapidly, it showed.
Infections have now spread to 98 of the country’s 112 poorest rural districts, up from 34 on April 15, according to the report from NITI Aayog, the government’s planning body. Nearly 2,250 new cases were added in those districts.
Prime Minister Narendra Modi’s administration runs the risk of a burgeoning death toll if the pandemic’s spread is not checked in rural India, where under-funded health care infrastructure and poor living conditions provide fertile ground for the virus. India is already the world’s fourth most affected country, and an exponential rise in cases in the villages could catapult it higher. With the crisis pushing the economy toward its first full-year contraction in more than four decades, the likelihood of increasing social unrest continues to grow.
The Prime Minister’s Office didn’t respond to an email seeking comment for this story.
‘Living in fear’
In the agricultural Ganjam district in Odisha, the Choudhari Tikarapada village of 5,000 people was coronavirus free till the end of May.
That all changed when about 200 labourers returned home to the area after they lost their jobs in the states of Maharashtra and Tamil Nadu during the lockdown. They were quarantined for seven days before entering the village. Soon after 13 were found Covid-19 positive, prompting the administration to declare it a containment zone, stopping any movement of people.
“If tests are conducted in my village then more infected persons will be found,” said villager Sadananda Sahu, adding it is impossible to maintain social distancing and hygiene in his area. “We are living in fear.”
Districts like Ganjam are among India’s poorest and have a skeletal health infrastructure, with most villagers accessing hospitals in nearby cities. India spent just 3.7% of gross domestic product on health care in 2016, putting it in the bottom 25 countries globally, according to the most recent World Bank data, leaving hospitals at risk of becoming quickly overwhelmed with virus cases.
All 33 rural districts in Rajasthan have also been affected, after more than 11 lakh labourers from cities including Mumbai, Pune and Ahmedabad came home in May, said state’s health minister Raghu Sharma. “They came to their villages from highly infected places,” said Sharma. “Thus it spread in the villages of Rajasthan.”
The state has set up quarantine facilities in each village, deployed senior level officials to monitor them and and formed village panels to check people’s movement, Sharma said. The state has enough isolation beds, ICU rooms, and personal protective equipment to deal with the situation and was ramping up testing capacity to 40,000 per day from current 25,250 over the next two weeks, he said.
Low testing
“Rural death rates for nearly all infectious conditions are considerably higher than in urban areas,” said Prabhat Jha, professor at the University of Toronto, citing a study. He called on the government to release all de-identified data on positive tests so epidemiologists can better understand how the virus is traveling through India. “Had the lockdown been a true lockdown, with workers not being kicked out of their urban places of residence, the problem would not have spread,” Jha said.
India’s low testing rates over the last two months have added to the uncertainty. India had tested more than 6.8 million samples as of June 20, according to the Indian Council for Medical Research. The country has so far reported more than 410,000 infections and nearly 13,300 deaths, according to data from Johns Hopkins University.
Jharkhand has about 1,500 confirmed cases. Just 117 are from urban centers, while the rest are from rural areas, which witnessed a surge following arrival of people from outside the state, said Nitin Kulkarni, secretary of the health department. The authorities have worked to stop the spread by isolating infected people at quarantine centers, Kulkarni said on June 11.
About 57 lakh migrants have been shifted to various destinations across the country by special trains and a further 4.1 million by road transport, according to a government filing in the country’s top court.

Don't Miss it New York opens up after coronavirus lockdown and in the shadow of George Floyd protests | The World
Up Next Essential poll: majority of Australians expect second wave of Covid-19 infections | Australia news