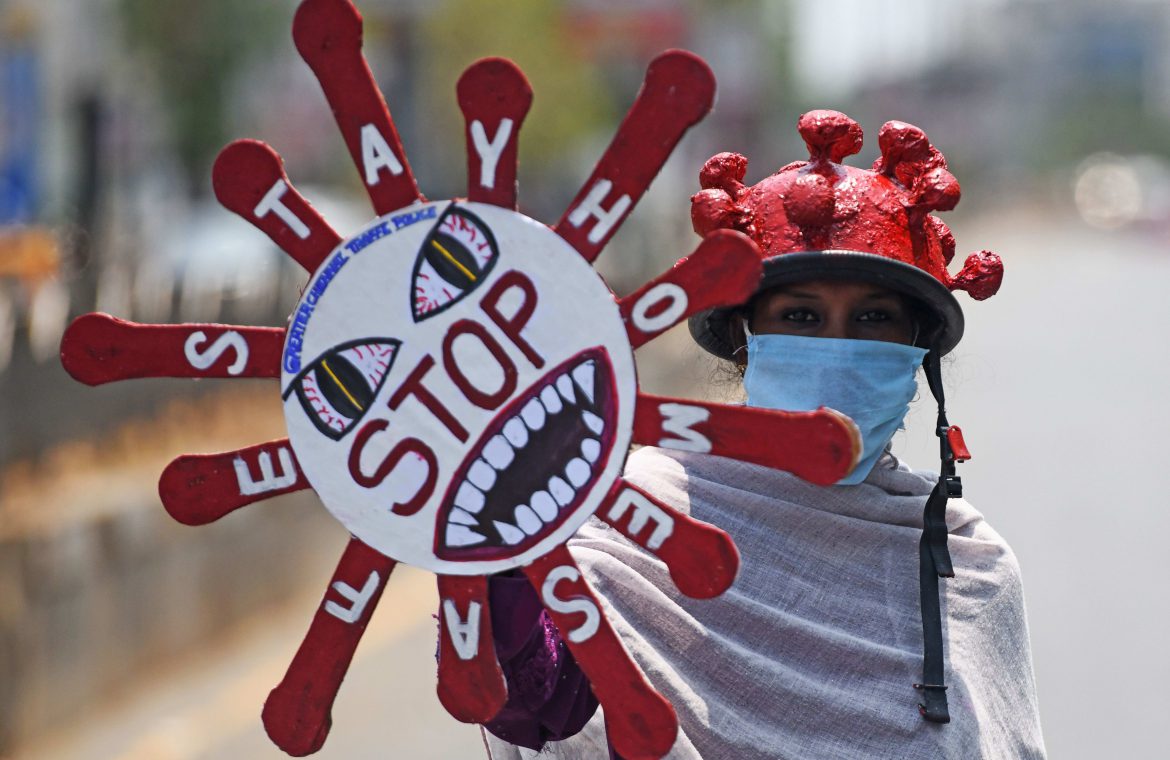 A volunteer in Chennai, India holds a placard to raise awareness about the coronavirus on a street during a government-imposed nationwide lockdown to combat the spread of Covid-19.

India is one of the world’s worst hit countries in the coronavirus pandemic, with reported cases spiking in recent weeks as the country emerged from a strict nationwide lockdown.

Cumulatively, India has reported more than 400,000 cases of infections since January. Though, relative to its population size, the percentage of infected individuals is still low. India also says the number of people who have recovered is higher than those currently affected by the virus.

The country’s lockdown began in late March and was subsequently extended several times. Stringent restrictions halted most economic activities and caused millions of people, many of them daily wage earners, to lose their jobs and revenue streams.

India’s recovery trajectory is going to be weak as the country is struggling to get past the peak of the pandemic, according to Priyanka Kishore, head of India and Southeast Asia economics at Oxford Economics. She also said India’s fiscal policy response has been “quite meagre” compared to the stringency of the lockdown.

To mitigate the economic fallout, Prime Minister Narendra Modi’s government had announced a $266 billion support package containing both fiscal and monetary measures, said to be worth around 10% of India’s GDP.

But economists have said the package will do little to stimulate growth, as it includes very little planned government spending and benefits of several measures are expected to only be seen in the medium term.

While the impact on India’s gross domestic product for the current quarter will not be known for a few more months, these charts below paint a snapshot of how economic activities were hampered during the lockdown.

India’s industrial production dropped sharply in April when the country went into lockdown and most factories were not in operation. The index contracted by 55.5% compared with the same period a year earlier. That includes sectors such as mining, manufacturing and electricity. Manufacturing of consumer durables saw the sharpest decline for the month.

The government said that the majority of industrial establishments reported no production for April.

“Consequently, it is not appropriate to compare the IIP of April, 2020 with earlier months,” the Ministry of Statistics and Programme Implementation said in its data release earlier this month, adding that the information will “undergo revision” in the coming months.

Data for May will be released in July.

The services industry collapsed in April as most businesses were shut due to the lockdown. A private survey by IHS Markit showed “extreme decline” in activity. The services business activity index compiled by the firm came in at a shocking 5.4, far below an industry forecast of around 40. Readings above 50 indicate expansion while those below that level represent contraction.

Business activity in the services sector also fell drastically in May as the pandemic hindered operations, reduced footfall in shops and led to a decline in demand. The number last month was 12.6 and IHS Markit said in its report that survey data “still pointed to extreme month-to-month declines in output and new orders.” Domestic travel and tourism sectors also declined sharply, contributing to the fall in services business activity.

IHS Markit pointed to India’s auto sector in a separate note this month. Production was largely shut in April before lockdown conditions started to be gradually eased. Citing the Society of Indian Automobile Manufacturers, the note pointed out the daily turnover lost for the auto manufacturing sector for each day of closure was around $300 million per day.

One of India’s most lucrative assets is its large consumer base. But people appeared to be less optimistic about their current situation and future expectations.

Data from the Reserve Bank of India showed consumer confidence collapsed last month. The current situation index and the future expectations index were both below 100, indicating that consumers were pessimistic. A reading above 100 represents optimism.

The survey for May was conducted through phone interviews of 5,300 households in 13 major cities across the country.

Data, anecdotal evidence and media reports all suggest that millions of people in India lost their jobs due to the lockdown. Experts said that would disproportionately affect daily wage earners and low-income households.

Information compiled by the Centre for Monitoring Indian Economy showed that the unemployment rate in both rural and urban areas rose sharply in late March. It remained relatively high in April, before showing signs of improvement starting in May when some activities resumed.

CMIE said unemployment is “witnessing a very rapid fall” in June, accompanied by an increase in the labor force participation rate.

On a national level, India publishes a periodic labor force survey over 12-month periods. In the latest figures released for the fiscal year 2018-2019, data showed the unemployment rate fell to 5.8% from a more than four-decade high the previous year, media reports said.

The lockdown’s impact on employment in India will likely be captured in the next survey, which will not be released until next year.