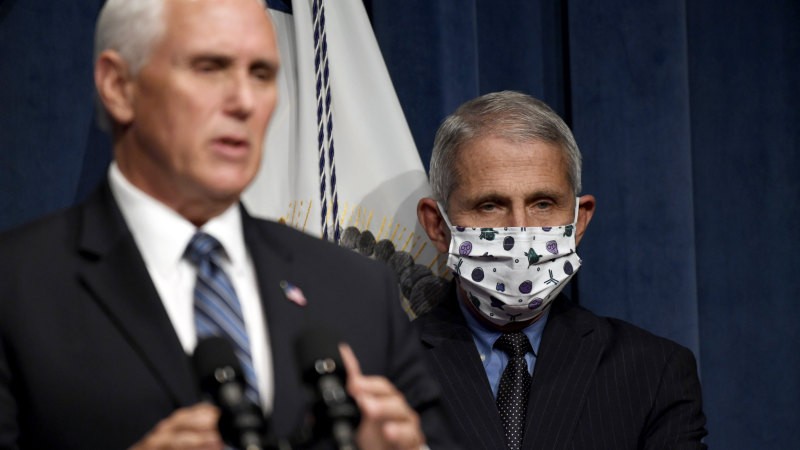 The Florida agency that governs bars acted after the daily number of confirmed cases neared 9000, a record that was almost double the previous mark set just two days earlier.

Texas, meanwhile, reported more than 17,000 confirmed new cases in the past three days, with a record high of nearly 6000 on Thursday. The day’s tally of more than 4700 hospitalisations was also a record.

A number of the hardest-hit states, including Texas, Florida, Arizona and Arkansas, have Republican governors who have resisted mask-wearing requirements and echoed President Donald Trump’s desire to quickly reopen the economy.

Amid the surge, the White House coronavirus taskforce, led by Vice President Mike Pence, held its first briefing in nearly two months on Friday afternoon, signalling the adminstration’s recognition that it cannot ignore the alarming increases.

At the briefing, Dr Anthony Fauci, the nation’s top infectious-disease expert, delivered an urgent “message to the country”, warning that coronavirus outbreaks could engulf the US. He pleaded for people to continue social distancing and wearing masks as an obligation to others.

“You have an individual responsibility to yourself but you have a societal responsibility because if we want to end this outbreak, really end it and then hopefully when a vaccine comes and puts a nail in the coffin, we’ve got to realise that we are part of the process,” Fauci said, noting that some states were doing better than others.

“If we don’t extinguish the outbreak, sooner or later, even ones [states] that are doing well are going to be vulnerable to the spread.”

“The freedom of speech, the right to peaceably assemble is enshrined in the Constitution of the United States,” he said, “and we have an election coming up this fall”.

Even as cases spike around the country, Pence asserted: “We slowed the spread, we flattened the curve, we saved lives.”

People in Raleigh, North Carolina protest an order that would make it mandatory to wear face masks on Friday.Credit:Ap

Meanwhile, the number of confirmed new infections in the US per day soared past the previous high of 36,400, set on April 24, during one of the deadliest stretches in the crisis so far, according to the count kept by Johns Hopkins University. The average number of new cases per day has risen about 60 per cent over the past two weeks, according to an Associated Press analysis.

While the increase is believed to reflect, in part, greatly expanded testing, experts say there is ample evidence the virus is making a comeback, including rising deaths and hospitalisations in parts of the country.

Deaths from the coronavirus in the US are down to around 600 per day, compared with about 2200 in mid-April. Despite the rise in cases, some experts have expressed doubt that deaths will return to that level, because of advances in treatment and prevention and also because a large share of the new infections are in younger adults, who are more likely than older ones to survive.

The virus is blamed for 124,000 deaths in the US and 2.4 million confirmed infections nationwide, by Johns Hopkins University’s count. But US health officials said the true number of Americans infected is about 20 million, or almost 10 times higher. Worldwide, the virus has claimed close to a half-million lives, according to Johns Hopkins.

On Thursday, Arizona put on hold any further efforts to reopen the economy, with Republican Governor Doug Ducey saying the numbers “continue to go in the wrong direction.” Arizona reported more than 3000 additional infections on Thursday, the fourth day in a week with an increase over that mark.

Meantime, Italy registered 30 more deaths of people with coronavirus infections on Friday, with 16 of them in Lombardy, the northern region that continues to still have by far the highest daily tally of new confirmed cases.

According to Health Ministry data, the nation confirmed 259 new cases since Thursday, raising to 239,961 the number of known coronavirus infections since Italy’s outbreak began in late February.

Deaths now total 34,708. Authorities say the number of overall cases and deaths is certainly higher, since many without serious symptoms didn’t get tested, and many died in nursing homes without being tested.

Premier Guiseppe Conte said Italy’s classrooms will be receiving students starting on September 14, more than six months after the government’s efforts to contain the spread of COVID-19 shuttered schools, forcing millions of students to have lessons remotely.

A World Health Organisation-led coalition fighting the COVID-19 pandemic is asking government and private sector donors to help raise $US31.3 billion ($45.7 billion) in the next 12 months to develop and deliver tests, treatments and vaccines for the disease.

Renewing its call on Friday for global collaboration against the pandemic, it said $US3.4 billion had been contributed for the coalition to date, leaving a funding gap of $US27.9 billion.

The WHO is working with a large coalition of drug-development, funding and distribution organisations under what it calls the ACT-Accelerator Hub.

The initiative is intended to develop and deliver 500 million COVID-19 tests and 245 million courses of new treatment for the disease to low- and middle-income countries by mid-2021, it said in a statement.

Coronavirus threatens to ‘boomerang’ back in Brazil

The coronavirus, now spreading through the smaller towns of Brazil’s interior, risks returning to major cities in a so-called “boomerang effect,” as a lack of specialised medical treatment forces patients into larger urban centres.

The impact of a potential second wave of new cases in urban centres could complicate attempts to reopen businesses and get the economy going again, experts said.

“The boomerang of cases that will return to the (state) capitals will be a tsunami,” said Miguel Nicolelis, a leading medical neuroscientist at Duke University who is coordinating a coronavirus taskforce advising the state governments of Brazil’s north-east.

Brazil, home to the world’s second worst coronavirus outbreak behind the US, has more than 1.2 million cases of the virus, which has killed nearly 55,000 people. On most days, it is spreading faster in Brazil than in the United States, the top country by cases.

Elsewhere around the world, China moved closer to containing a fresh outbreak in Beijing. Another record daily increase in India pushed the caseload in the world’s second most populous nation toward half a million. And other countries with big populations like Indonesia, Pakistan and Mexico grappled with large numbers of infections and strained health care systems.

South Africa, which accounts for about half of the infections on the African continent with more than 118,000, reported a record of nearly 6600 new cases after loosening what had been one of the world’s strictest lockdowns earlier this month.