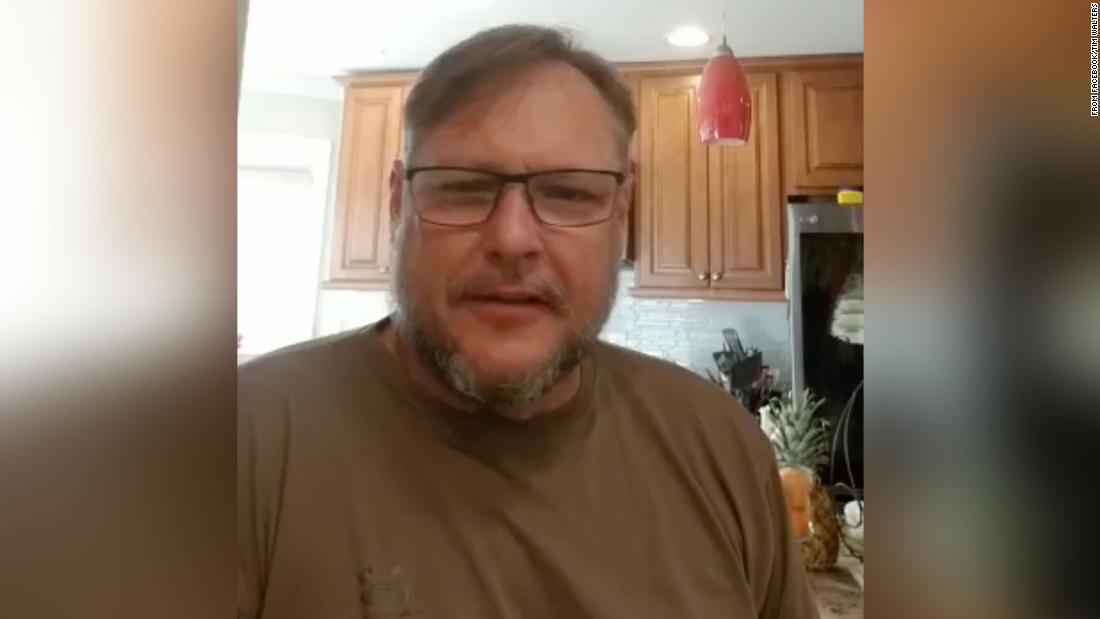 Tim Walters, the organizer for Reopen Maryland, said in a Facebook live video posted Thursday that he is quarantining in his home. The US Navy veteran and former Republican candidate for Maryland’s House of Delegates also said that his wife and son would get tested and they would be following the 14-day quarantine.

“I did have a hard day yesterday. I told you guys I wasn’t feeling really well. I crashed later in the day, had to go to the emergency room. I thought I was actually having a stroke … turns out I had Covid,” he said in the video, continuing later: “As you can see, I’m not dying. It’s uncomfortable. I would make it akin to having the flu.”

In April and May, Reopen Maryland, a grassroots group, organized rallies in Annapolis and across the state to push Hogan to reopen the state’s economy. The group in May also joined a handful of religious and business leaders and state lawmakers in suing the governor over his stay-at-home order.Walters first shared he was diagnosed with coronavirus earlier this week in a series of Facebook videos, according to The Capital Gazette, which first reported on Walters’ diagnosis. Walters separately told The Daily Record on Friday that he had deleted some videos in which he discussed his diagnosis because of backlash his family received.Walters, according to the Capital Gazette, urged those he has recently come in contact with to assess their health, but said he will not provide information to state public health officials for contract tracing — an epidemiological tool that public health officials say is key to understanding coronavirus and stopping its spread.

Walters and Reopen Maryland have not responded to CNN’s request for comment.

Hogan has gradually lifted restrictions in the state, allowing gyms, casinos and malls to reopen last week, but people in Maryland are still required to wear face coverings in retail spaces and on public transportation.

The Centers for Disease Control and Prevention recommends Americans wear a cloth face cover in public to curb the spread of the coronavirus, noting that “cloth face coverings are meant to protect other people in case the wearer is unknowingly infected but does not have symptoms.”Dr. Christopher Murray, director of the Institute for Health Metrics and Evaluation, said in a statement that “wearing masks can reduce transmission of the virus by as much as 50%, and those who refuse are putting their lives, their families, their friends, and their communities at risk.”

Walters told the Daily Record that contracting Covid-19 after months of not wearing a face mask has not changed his views, “because there’s too much proof that masks don’t work.”

“I don’t care if you wear a mask or not. I’m not here to advocate for that. I think the government’s role is to educate us so we can make those informed decisions,” he told the paper.

While Reopen Maryland protested the governor’s coronavirus restrictions in May, others in the state have since joined nationwide demonstrations against police brutality and racial injustice.Hogan on his Facebook page Friday shared the Gazette’s article about Walters’ diagnosis, using it as an opportunity to encourage all protesters to get tested for coronavirus.

“As Marylanders have gathered to peacefully protest in recent weeks, I want to reiterate to those participating in these events that it’s still important to continue to take all precautions to reduce the risks of spreading the coronavirus,” the Republican governor wrote.

“Our health experts are strongly encouraging anyone who attended a demonstration or mass gathering to immediately get tested for coronavirus, and they are also advised to avoid contact with vulnerable populations,” he said.

There have been 3,142 deaths due to Covid-19 in Maryland, according to data from John Hopkins University. The state currently has over 66,000 reported cases, with nearly 500 people hospitalized, and has tested over 613,500 people, according to the Maryland Department of Health. A majority of the positive cases are among those ages 30-39, while most of the deaths have been among those 80 and over, according to the department.