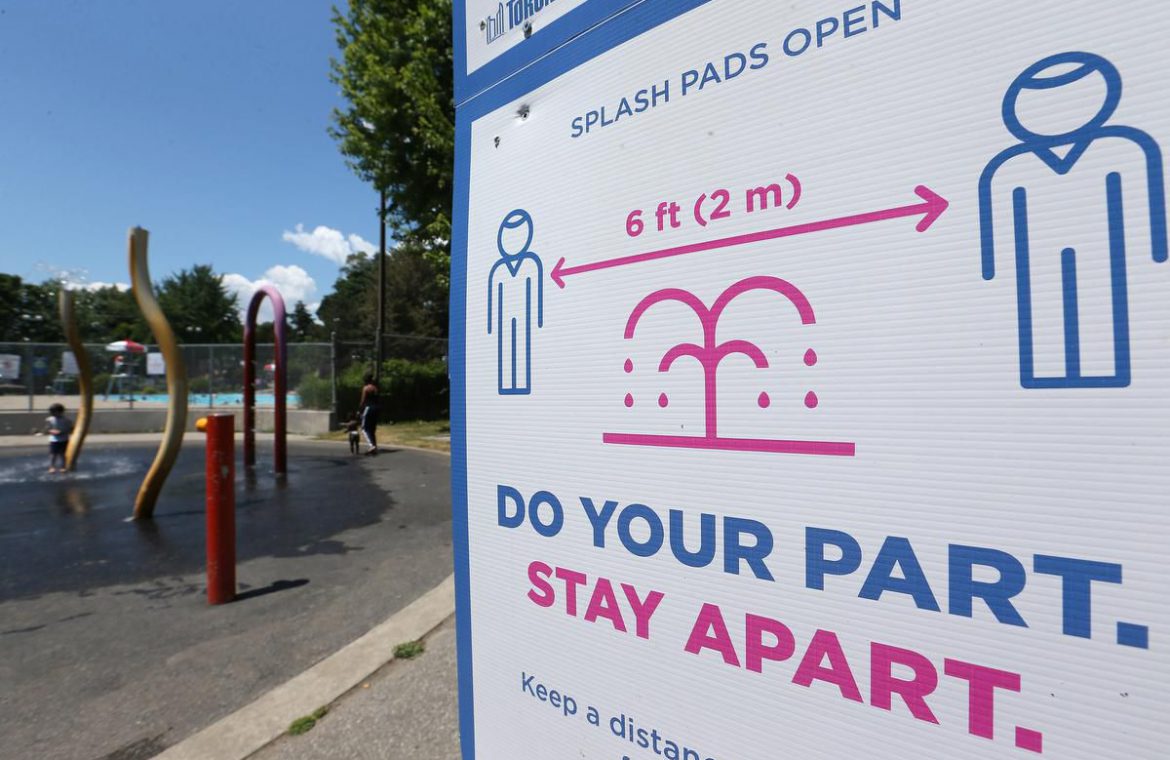 8:45 a.m.: Statistics Canada says the economy saw its largest monthly drop on record in April as it came to a near standstill due to the pandemic, but early indications point to a rebound in May as businesses began to reopen.

The agency says gross domestic product fell 11.6 per cent in April with non-essential businesses shut for the full month following a 7.5 per cent decline in March.

However, Statistics Canada says its initial flash estimate for May points to growth of 3.0 per cent.

Economists on average expect a drop of 13 per cent for April, according to financial markets data firm Refinitiv.

8:30 a.m.: Mayor John Tory is expected to make an announcement regarding the use of face masks/coverings in Toronto at 9 a.m.

Mayors from across the Greater Toronto and Hamilton Area have been urging Premier Doug Ford and provincial health officials to make wearing masks mandatory to help stop the spread of COVID-19.

“The mayors and chairs unanimously agree to request to the government of Ontario to implement a mandatory face covering measure for large municipalities,” said a statement Monday on their behalf from Markham Mayor Frank Scarpitti.

“Every person wearing a face covering properly is protecting those around them from the risk of virus spread,” said the mayors’ statement, which was shared on Twitter by Toronto Mayor John Tory.

“We are at a critical time in the fight against COVID-19. We may do everything we can to avoid flare-ups of the virus in our communities.”

Ford, who recommends wearing a mask indoors in a public space or outside when a safe physical distancing of two metres apart cannot be maintained, said municipalities already have the power to mandate face coverings. Enforcement is also up to civic governments.

But the premier said it would be difficult to force all Ontarians to wear masks.

Read the full story on the letter from the Star’s Rob Ferguson and Robert Benzie.

6:01 a.m.: Donors from around 60 countries and international agencies are meeting Tuesday to drum up financial aid for Syria as the coronavirus and economic chaos wreak even more havoc in a country shattered by a conflict now in its 10th year.

The war has killed more than 400,000 people and sparked a refugee exodus that has destabilized Syria’s neighbours and impacted Europe. Around 11 million people are in need of humanitarian assistance, and some 9 million don’t have enough to eat. More than half of the population have no jobs.

The coronavirus has sparked “a multitude of new and complex challenges including the restriction of movement and goods, the delay of certain field activities, the closure of borders and a critical insufficiency of protective equipment for staff and volunteers,” International Federation of the Red Cross and Red Crescent societies President Francesco Rocca said Tuesday.

5:21 a.m.: China confirmed 19 new cases as those infected in the capital Beijing’s June outbreak started being released from hospital. Of the new cases, seven were reported in Beijing and one in the eastern financial centre of Shanghai, while 11 others were brought by Chinese travellers from outside the country, according to the National Health Commission.

5:15 a.m.: India on Tuesday reported more than 18,000 new virus cases and 400 deaths after an Indian company said it would start clinical trials of a potential vaccine.

Bharat Biotech said it had received government permission to go ahead with the first two phases of clinical trials after initial studies demonstrated safety. Multiple vaccine trials are in a preclinical stage in India, and several other candidates are being tested around the world.

The new infections confirmed in the past 24 hours raised India’s cases to 566,840, the fourth-highest in the world. The addition of 418 deaths raised its fatalities to more 16,000, according to India’s health ministry. Experts say the true toll of the disease around the world is much higher.

5:05 a.m.: South Korea’s professional baseball league says it will require fans to wear masks and to sit at least a seat apart as it prepares to bring back spectators in the coming weeks amid the coronavirus pandemic.

The Korea Baseball Organization on Tuesday said fans will also not be allowed to eat food in the stands. Teams will be initially allowed to sell only 30% of the seats for each game, a figure that could be expanded to as much as 50% depending on the progress in the country’s anti-virus efforts, according to the league’s plans.

Fans will also be screened for fevers and discouraged from excessive shouting, singing and cheering during the game to prevent contact or dispersion of droplets, the KBO said. And perhaps as a means of discouraging any boisterous behaviour, beer will also be banned and fans will only be allowed to drink water or non-alcoholic beverages.

4:32 a.m.: Scandinavian Airlines said Tuesday it is getting an aid package worth 14.25 billion kronor ($1.5 billion) after an agreement with its main shareholders, securing the carrier’s survival amid the COVID-19 crisis.

The governments of Sweden and Denmark, which own shares in the airline, were partly financing the recapitalization plan, SAS said in a statement.

The aid package was also financially supported by its third main owner, the Knut and Alice Wallenberg Foundation, a Swedish public and private foundation.

4:15 a.m.: COVID-19 means the true north is not entirely free this Canada Day, but a new survey suggests that’s not going to change how many people mark the holiday.

Leger Marketing and Association for Canadian Studies surveyed Canadians asking whether, given all that’s gone on in the last three months with the COVID-19 pandemic, they’ll be more or less likely to find a way to celebrate this year.

For 42 per cent of those polled, this Canada Day will be no different than any other.

Sixteen per cent overall of those surveyed are feeling that true patriot love — they say they’re more likely this year to find a way to celebrate, even if it’s just a small gathering.

The feeling is strongest in B.C., the province widely seen as weathering the COVID-19 storm better than others. There, 22 per cent say they’re more likely to party.

However, that tally also included an administrative drop after Toronto Public Health removed several duplicate cases from its records. The health unit said the city saw another 62 new infections Monday, but after adjusting for the duplicates the city’s running total fell by 10.

Accounting for these cases, the province saw a total of 304 COVID-19 cases reported since the same time Sunday, the most since June 8.

That high one-day count included another 88 new cases in the Windsor-Essex health unit, which again reported dozens of infections among migrant farm workers.

Meanwhile, 10 more fatal cases were reported Monday. The daily rate of deaths has fallen sharply in the province since peaking in early May, when the health units reported as many as 94 deaths in a single day.

Earlier, the province reported that 232 patients are now hospitalized with COVID-19, including 46 in intensive care, of whom 35 are on a ventilator. All three totals are near the lowest the province has reported in data that goes back to early April.

The province says its data is accurate to 4 p.m. the previous day. The province also cautions its latest count of total deaths — 2,665 — may be incomplete or out of date due to delays in the reporting system, saying that in the event of a discrepancy, “data reported by (the health units) should be considered the most up to date.”

Don't Miss it Deaths in England and Wales fall below average for first time since coronavirus lockdown | World news
Up Next US coronavirus: Many states hit pause on reopening but experts say spread of virus is hard to control