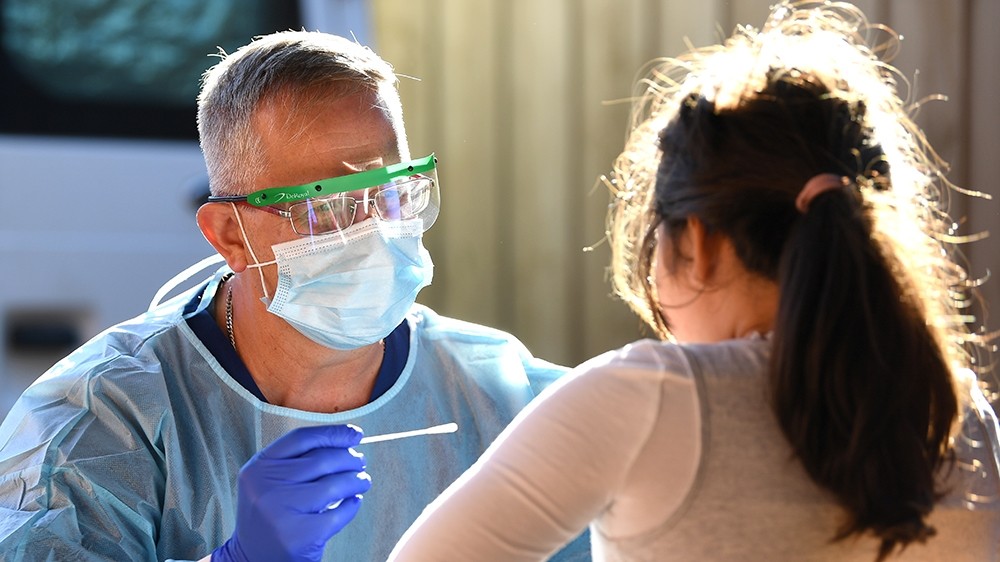 Authorities will lock down more than 300,000 people in suburbs north of Melbourne for a month from late on Wednesday to contain the risk of infection after two weeks of double-digit rises in new coronavirus cases.

Top US infectious diseases expert Dr Anthony Fauci has warned the country could see 100,000 new coronavirus cases a day and a “disturbing” number of deaths if Americans do not start following public health recommendations.

More than 10.4 million people around the world have been diagnosed with the coronavirus, at least 5.3 million have recovered, and more than 510,000 have died, according to Johns Hopkins University.

Lebanon’s only international airport has reopened following a more than three-month shutdown as part of the country’s lockdown to prevent the spread of the coronavirus.

The airport will operate at 10 percent capacity at first, bringing in around 2,000 travelers a day.

The first flight to arrive was Emirates from Dubai. Others scheduled on Wednesday are from Saudi Arabia, Qatar, Kuwait, London and Paris.

08:30 GMT – Greece reopens islands to flights in bid to save tourism season

Greece has prepared to welcome tourist flights to its island destinations for the first time in months, as it raced to salvage a tourism season shredded by the coronavirus pandemic.

More than 100 flights from other EU nations and a select group of non-EU countries are expected at 14 regional airports including Corfu, Santorini, Mykonos, Rhodes and Crete, airport operator Fraport said.

Flights from the United Kingdom, one of its most lucrative travel markets, are not due to restart until July 15 at the earliest, in line with EU recommendations. The same applies to the United States, Russia, Turkey and Sweden.

Russia has reported 6,556 new cases of the novel coronavirus, taking its nationwide tally to 654,405.

The country’s coronavirus response centre said 216 people had died of the virus in the last 24 hours, bringing the official death toll to 9,536.

Burundi’s new President Evariste Ndayishimiye has declared the coronavirus the country’s “biggest enemy”, in a major about-turn for a nation which has largely ignored the dangers of the virus.

Former president Pierre Nkurunziza, who died last month, and even Ndayishimiye himself, had until now downplayed the gravity of the pandemic, saying God had spared Burundi from its ravages.

Burundi held a full-blown campaign ahead of a May election, and unlike its neighbours has taken few measures to combat the spread of the virus.

Beijing has lifted several lockdowns imposed to control a fresh coronavirus outbreak and reported just three new cases in the city, raising hopes that the cluster had been brought under control.

The Chinese capital had closed off dozens of residential compounds and carried out mass testing last month after hundreds of infections raised fears of a virus resurgence.

But five residential communities that have had no new virus cases during a control period were released from lockdown on Tuesday, state media reported, as the city relaxed curbs.

Thailand has further eased COVID-19 restrictions, allowing the reopening of schools and entertainment venues such as restaurants and massage parlors that had been shut since mid-March.

It also is allowing in foreign visitors on a controlled basis, limiting entry to those with existing family or work ties, students, technical experts, and investors. Scheduled passenger flights to Thailand were suspended in early April.

The number of foreign visitors allowed into the country each day is limited to 200, and they are supposed to travel on repatriation flights bringing Thai citizens home.

Tokyo Disneyland and DisneySea have reopened after being closed for four months due to the coronavirus pandemic.

The two parks have new guidelines, including limiting the number of entrants in three shifts to maintain social distancing. No handshakes, hugging or photos taken with Mickey Mouse and other characters are allowed.

El Al Israel Airlines has reported a first quarter loss on a steep drop in revenue and said it has had to give up some of its fleet and release most of its workforce on unpaid leave to contend with the coronavirus outbreak.

Israel’s flag carrier is seeking state-backed loans to help it through the crisis, as foreigners are barred from entering the country and incoming Israelis must enter quarantine.

The government argues that the airline’s problems, including a bloated workforce, high salaries and a weak balance sheet, began well before the pandemic.

Tokyo has confirmed 67 new cases of coronavirus infection, the highest daily tally in the Japanese capital since the state of emergency was lifted in late May, public broadcaster NHK reported.

Hi, this is Elizabeth Melimopoulos in Doha taking over the live updates from my colleague Kate Mayberry in Kuala Lumpur.

Brazil has reported 1,271 coronavirus deaths in 24 hours, bringing its total since the start of the pandemic to 59,656.

The country is the worst-affected in the world after the US, with more than 1.4 million confirmed cases of the virus to date.

04:15 GMT – Google delays reopening of offices in the US

Google has said it will postpone the opening of its offices in the US because of the surge in coronavirus cases there.

Spokeswoman Katherine Williams told Reuters the tech giant’s offices would remain closed until at least September 7, with staff continuing to work from home.

Google had planned to open at 10-percent capacity from July 6, rising to 30 percent in September depending on conditions.

People in Saudi Arabia have been on a shopping spree in the run-up to a tripling in VAT on Wednesday.

The kingdom announced in May it would triple the VAT rate to 15 percent and halve the cost-of-living allowance given to citizens as part of a package of austerity measures as it feels the squeeze of sliding oil prices and the coronavirus pandemic.

A judge in Brazil has dismissed a court ruling that requires President Jair Bolsonaro to wear a mask when out in public.

Judge Daniele Maranhao Costa said the ruling was not necessary because masks are already mandatory in Brasilia, the federal capital.

Bolsonaro, who has been dismissive of the virus, even as the toll climbed, has regularly broken physical distancing measures, shaking hands, taking selfies and hugging supporters during rallies.

The US recorded more than 47,000 cases of coronavirus on Tuesday – the biggest one-day spike since the pandemic began – according to a Reuters count.

Alarming data from the US shows that coronavirus cases in 14 states more than doubled in June, with Arizona reporting a 294-percent increase.

Arizona also has the highest rate of people testing positive for the virus – at 24 percent during the past week. The WHO considers positive testing rates of above 5 percent a concern.

US case increases in June:

Yonhap news agency says the Korea Centers for Disease Control and Prevention signed an agreement with Gilead Sciences, which holds a patent for the drug. It did not disclose the amount of remdesivir it would buy or the price.

The WHO has told NK News that North Korea has tested just 922 people for COVID-19.

This is the first update on the coronavirus situation in North Korea for two months.

“As per the update received on June 19, 922 people have been tested for COVID-19 and all tested negative,” WHO Representative to the DPRK Edwin Salvador told the publication.

He added that 443 people had been quarantined since May 7 and that as many as 255 remain under quarantine. All are reportedly North Korean nationals.

North Korea has now tested just 922 people for COVID-19, an official from the World Health Organization (WHO) told NK News on Tuesday.

This suggests that only 200 people have been tested for #COVID19 since April. (By @jeongminnkim) https://t.co/uIxlNk4Vpv

Read all the updates from yesterday (June 30) here.

Don't Miss it Coronavirus LIVE Updates: Section 144 imposed in Mumbai; stringent clampdown on movement, gathering in containment zones
Up Next Coronavirus Was Moving Through NY in Early February