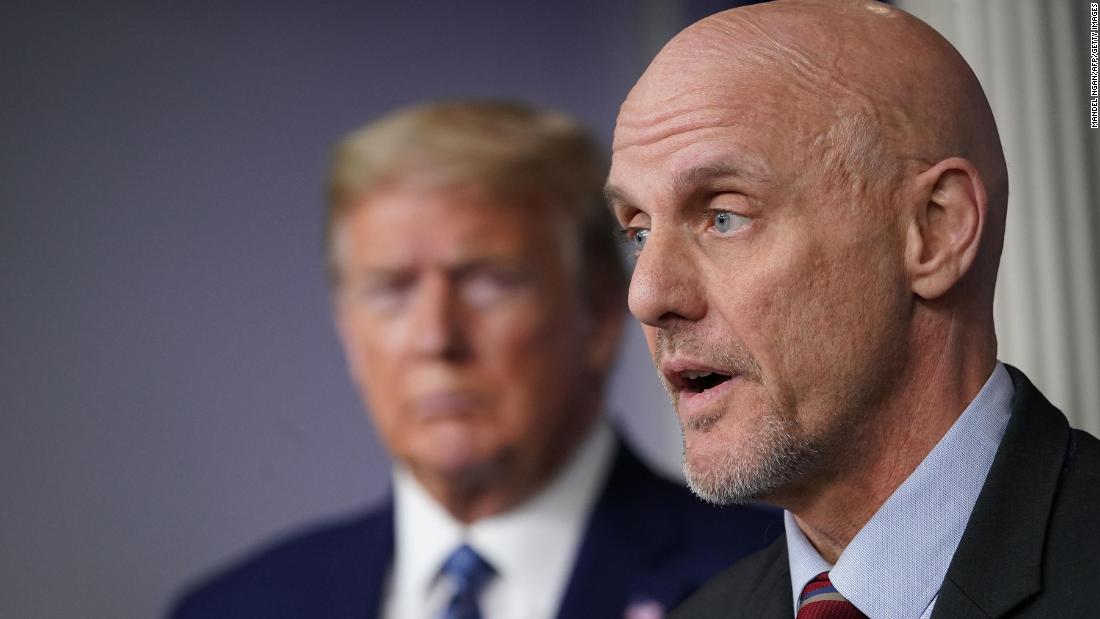 “I’m not going to get into who is right and who is wrong,” Dr. Stephen Hahn, a member of the White House coronavirus task force, told CNN’s Dana Bash on “State of the Union.”

During his remarks Saturday at the White House Independence Day event, Trump claimed without evidence that 99% of coronavirus cases “are totally harmless.”

The US Centers for Disease Control and Prevention estimates that 35% of cases are asymptomatic, but even people with mild or no symptoms can spread the virus to others.

While the World Health Organization has said the global fatality rate is likely less than 1%, the WHO also said about 20% of all people who are diagnosed with coronavirus are sick enough to need oxygen or hospital care.

“I totally support the CDC and the information that they’re putting out with respect to this pandemic,” Hahn said Sunday.

Hahn said the coronavirus pandemic is “a rapidly evolving situation” but stressed that the US “absolutely must take this seriously.”

“What I’ll say is that we have data in the White House task force. Those data show us that this is a serious problem. People need to take it seriously,” Hahn said.

There have been more than 2.8 million cases of coronavirus in the United States and at least 129,000 people in the US have died, according to Johns Hopkins University’s latest tally. Trump celebrated the Fourth of July at Mount Rushmore on Friday and at the White House’s “Salute to America” on Saturday, where many attendees were seen neither socially distancing nor wearing masks at both events.

“if you don’t follow local and state guidelines about what to do, if you’re not following the CDC and White House task force guidelines, you are putting yourselves and you’re putting your loved ones at risk,” Hahn said.

Asked if he was uncomfortable by the President holding those events that put Americans at risk, Hahn said the circumstances are different.

“I think in terms of that specific instance at the White House, it’s important for everyone to remember that it’s a different set of circumstances. People are tested regularly. The President is tested regularly,” Hahn said.

Hahn was also questioned about the President’s recent doubling down in a Fox Business interview of his belief that coronavirus will “sort of just disappear.”

“No, we’re seeing the surge in cases, particularly across the Sun Belt. And so this virus is still with us,” the FDA commissioner told CNN.

‘Too early to tell’ if Florida is safe for GOP convention

Hahn said it is “too early to tell” whether Florida will be a safe place for the Republican National Convention next month amid a surge of Covid-19 cases there.

“We’ll have to see how this unfolds in Florida and around the country,” Hahn said.

Florida set an all-time record of the most coronavirus cases in the US in a single day on Saturday, with a total of 11,458 cases, according to data compiled by Johns Hopkins University.

Republican National Committee spokesman Mike Reed told CNN the party is committed to holding the convention in Florida but will be conducting temperature checks and have testing available to attendees.

“The RNC is committed to holding a safe convention that fully complies with local health regulations in place at the time. The event is still almost two months away, and we are planning to offer health precautions including but not limited to temperature checks, available (personal protective equipment), aggressive sanitizing protocols, and available COVID-19 testing,” Reed said in a statement.

Reed added that the RNC will continue to coordinate with local leadership in Jacksonville and state of Florida.

“We will continue to work with state and local officials to ensure the safety of all attendees. The President is looking forward to a great celebration,” Trump campaign spokesman Tim Murtaugh said in a statement provided to CNN.

The convention is slated for August 24-27 in Jacksonville, Florida, and Charlotte, North Carolina.

Trump will accept the nomination this year in Jacksonville, which implemented mandatory face mask requirements last week due to the spike in infections, but the Republican National Committee is contractually obligated to hold a portion of its convention in Charlotte.

The President’s reelection team selected the Sunshine State as the new location for much of the convention after sparring with officials in North Carolina over convention size and social distancing requirements.

This story has been updated with additional details.

Here are the latest developments on the coronavirus pandemic in the Greater Toronto Area for Thursday: TTC expands mask giveaway…

With most schools in Jamaica still closed due to the pandemic, schoolteacher Taneka Mckoy trudges around her inner city Kingston…