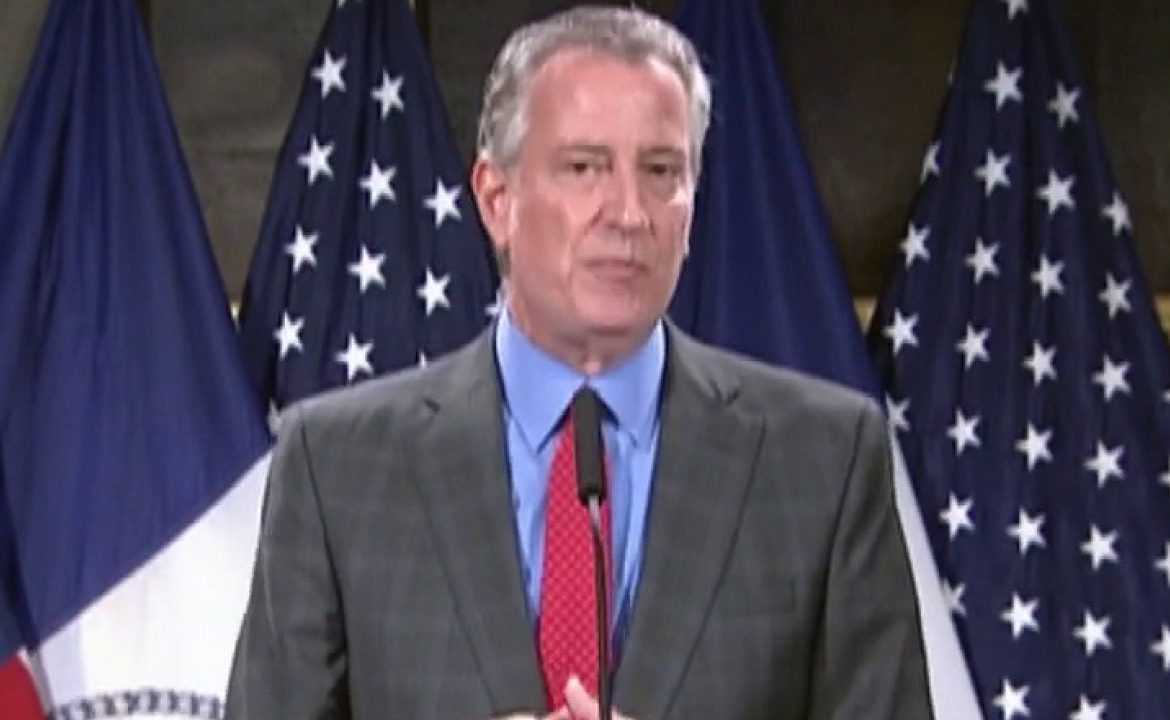 Mayor Bill de Blasio blamed the uptick in violence over the weekend on the coronavirus pandemic, while defending the city’s latest policing reforms and vowing to keep New York City “the safest big city in America.”

De Blasio held a press conference Monday after a weekend of violence across New York City that left at least eight people dead and more than 44 people shot and injured.

“I want to talk about what happened this weekend. Many were out there celebrating, but we saw too much violence, and we have a lot of work to do to address it,” de Blasio said, while adding that “there is not one cause for something like this.”

“This is directly related to coronavirus,” de Blasio said. “This is a very serious situation… As we’re getting into warmer and warmer weather, we’re feeling the effects of people being cooped up for months, the economy hasn’t restarted – we have a real problem here.”

De Blasio vowed to “double down” to address the violence, which included shootings in Brooklyn, the Bronx and upper Manhattan, noting that it was going to take “neighborhood policing” and cooperation from clergy and elected officials.

“This is all hands on deck,” de Blasio said, while adding that the city has “been dealt a really tough hand.”

“It was the health care crisis in March and April, May we were coming out of it, the warmer months. People are cooped up … they don’t have the normal things to engage their lives,” he explained. “But we’re going to overcome it. It’s going to be tough and take hard work.”

He added: “I know it feels very unsettling for people but we’re going to fight it back.”

Meanwhile, New York City Police Department Chief Terence Monahan weighed in on the violence, agreeing that the surge in violence over the weekend was due to “a combination of things,” including the COVID-19 pandemic, but also pointed out the court system being shut down and new reforms in the city, such as bail reform.

“A lot of different individuals are on the street that should not be on the street,” Monahan said Monday, noting that inmate releases from Rikers Island due to COVID-19, bail reform and the newly imposed ban on chokeholds contributed as well.

“It has our cops hesitating to enforce some of those quality-of-life issues,” he said, noting that police do not have a problem with the ban on chokeholds, but that other language in the new legislation makes it difficult for officers to make arrests, including using their knees on a suspect’s back.

“The animosity toward police out there is tremendous,” Monahan said. “Just about everyone we deal with is looking to fight a police officer when we make an arrest, so it is vital that we get communities together supporting and speaking up for police.”

He added that “the vast majority support our police,” and that the force needs “to know from the communities how they want their communities policed.”

“It is unacceptable the amount of violence we had this weekend,” he added. “We have to deal with the guns on the streets and find new ways to get them.”

De Blasio also added that the court system not functioning due to coronavirus is causing a backlog for the NYPD.

Meanwhile, de Blasio and Monahan were asked if police officers were pulling back due to the New York City Council’s decision to defund the NYPD by $1 billion last week.

“Absolutely not,” Monahan said. “Our guys are not slowing down. Investigations are moving along. Shooting and homicide investigations do not happen overnight… We have numerous individuals that we are ready to indict and we are waiting for the court system to open up.”

The comments Monday came after there were 21 shootings that left at least 37 people injured and three people killed during a nine-hour span between midnight Saturday through 9 a.m. Sunday, according to NYPD Chief of Detectives Rodney Harrison. Later on Sunday night – in a span of three hours – at least seven people were shot, including five fatally.

The violence on Sunday night began at 5:47 p.m. At least four people were fatally shot – all in their 20s – in the Bronx and Brooklyn, the New York Post reported. A 45-year-old man was found dead after being shot in the head in Staten Island at 8:47 p.m.

De Blasio, on Monday, said that the city is “going through a rough patch in terms of crime, but we will not go back.”

“We [became] the safest big city in America. We will keep that title,” de Blasio said. “We will not go back and that’s the work we will do together in New York City.”