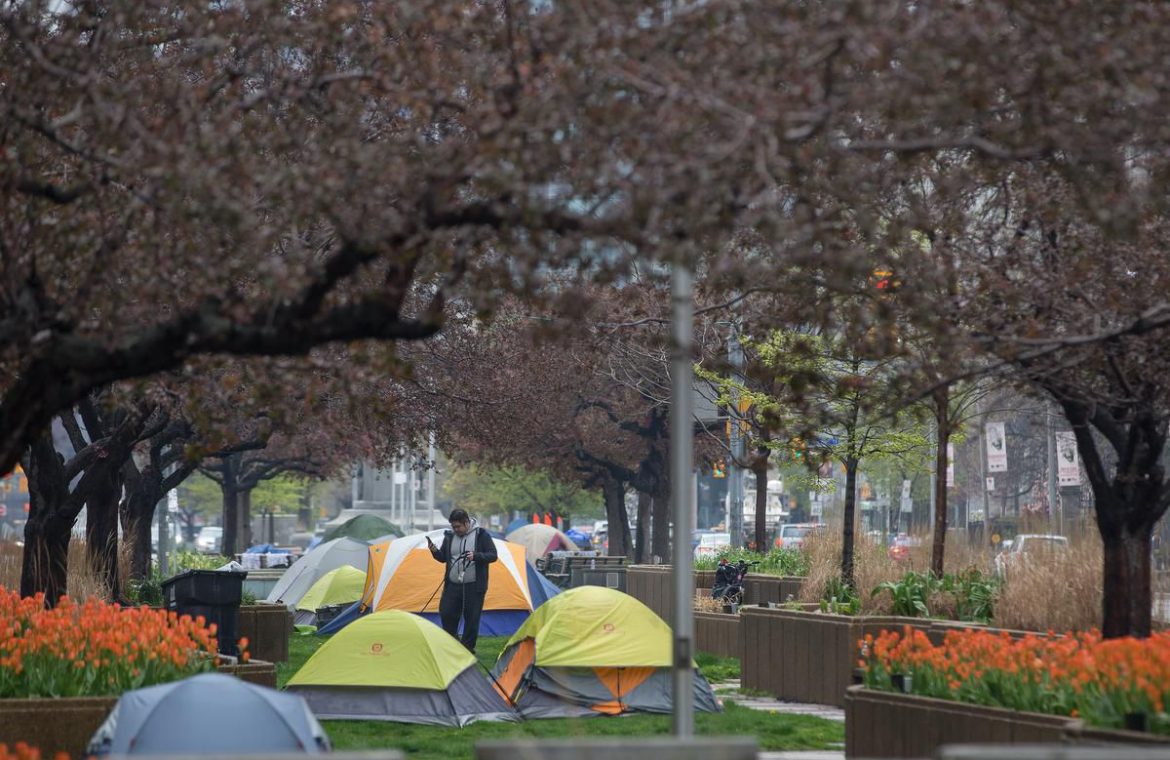 Toronto’s homeless advocates have relaunched a lawsuit against the city over unsafe shelter conditions.

In a notice of motion filed Friday, a coalition of public-interest groups alleges that the city has failed to follow a settlement agreement meant to ensure physical distancing standards within the shelter system.

The lawsuit, first launched earlier this year, alleges the city put people’s lives at risk amid the pandemic by not following public health distancing recommendations.

In a settlement reached in May, the city agreed to make efforts to keep two metres between shelter beds, end the use of bunk beds and make beds available for all shelter clients — including anyone who has received support since March 11, including those who left to live in tent encampments.

The settlement agreement required the city to give updates on compliance, something the advocates say has not yet happened.

“On June 15, the city told us that they had reached compliance — and we disagree,” said Jessica Orkin, a lawyer representing the motion. “So this motion is about the question of whether the city is in compliance with its obligations.”

In one case, Orkin said, a shelter reported its capacity had been reduced from 50 to 41 beds; meanwhile, the overall shelter system has seen a decrease of up to 1,000 beds. “What we can say is that there are many, many people who are unable to get beds who are entitled to those beds under the agreement,” she said.

In a statement, a spokesperson confirmed the city will be responding to the motion. “The City has complied with the agreement to use best efforts to achieve physical distancing across the shelter system and provide shelter beds to people who have been clients of the shelter system since March 11,” the statement read.

“City staff have spent numerous hours responding to communications from the applicants and have answered all questions arising from the information provided under the agreement,” it read.

The advocates say people seeking shelter space often wait on hold with the city’s central intake centre only to find out that there is no space available to them.

When space is available, clients must arrive at the shelter within two hours or risk losing the space, Orkin said, adding that there are “all sorts of circumstances that make it very challenging to get yourself and your belongings across the city to a shelter bed within two hours.”

Greg Cook, an outreach worker with Sanctuary Ministries, one of the organizations that filed the initial lawsuit, told the Star he continues to hear that those accessing shelter services are offered a bunk bed — a violation of the settlement agreement.

“A big part of why there are so many encampments in the city right now is because people just can’t get a bed,” Cook said, noting that while the city was successful in moving many people into hotels, there continues to be a lack of spaces available for those in need.

“They didn’t, in my opinion, get enough hotels (and) so weren’t able to equal the same amount of beds available in a system that was already full.”

In an affidavit filed in court, Doug Johnson Hatlem, a street pastor with Sanctuary, said it is his experience that the city’s shelter system “operates with almost no spare capacity,” while those seeking beds are often told to keep calling central intake in hopes of being directed to a space.

“Generally, there are no beds available, and the operator advises that you call back in an hour or two. Very occasionally, a bed is available,” Hatlem wrote.

According to data from the city, a total of 625 people have tested positive for COVID-19 in cases linked to shelter outbreaks. Four of those people have died.

With files from Alyshah Hasham and the Canadian Press.

Don't Miss it Coronavirus Updates: Final year university exams to be conducted by end of September, says UGC in revised guidelines
Up Next De Blasio blames NYC weekend violence on coronavirus, vows to ‘double down’ to keep city safe