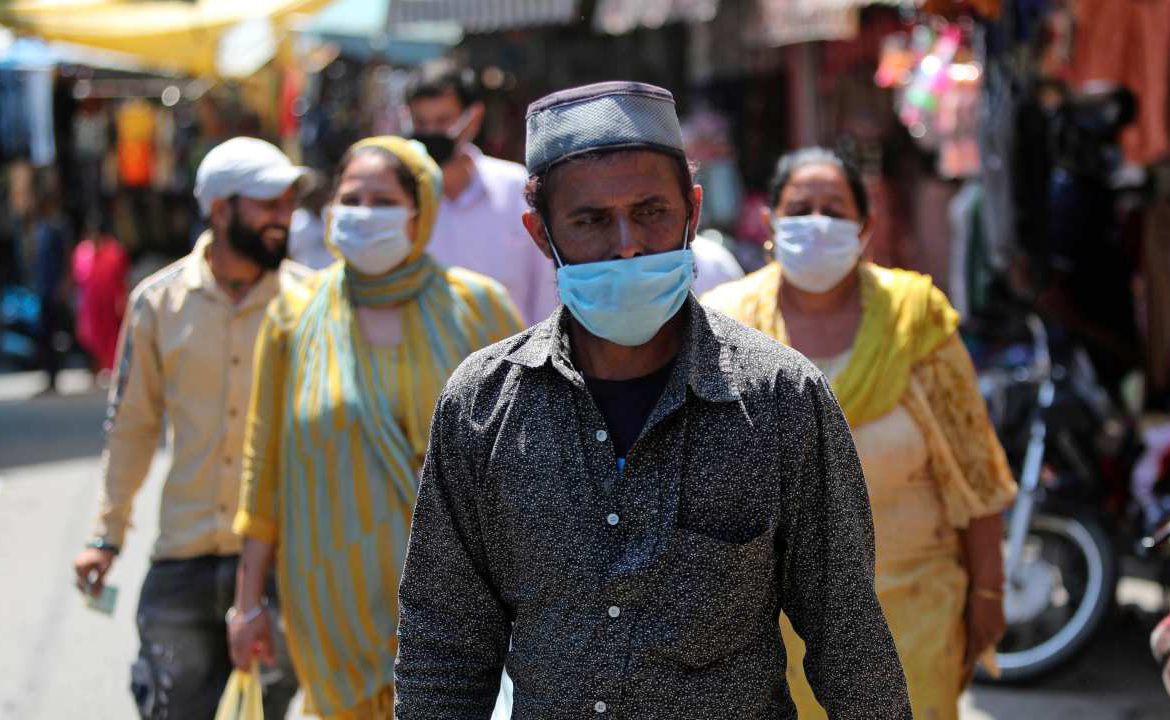 Coronavirus LIVE Updates: The 77-year-old actor posted on Twitter that his family and staff had also been tested and their results were awaited.

Coronavirus LIVE Updates: Actor Amitabh Bachchan said that he had tested positive for the novel coronavirus infection and has been shifted to the hospital. According to news agency ANI, the actor has been admitted to Mumbai’s Nanavati Hospital.

Kerala’s total case count climbed to 7,438 while the toll due to COVID-19 reached 29 with two more deaths reported on Saturday.

The Nagaland government has decided to extend the ongoing lockdown in the state till 31 July.

Meanwhile, the Meghalaya government announced a total lockdown in Shillong on Monday and Tuesday.

The health ministry said that a total of 5,15,385 COVID-19 patients have so far been cured and discharged, of which 19,870 were discharged in the last 24 hours. With this, the recovery rate has risen to 62.78 percent and the number of recoveries exceeds active cases by 2,31,978.

The civic body had to change its traditional approach of waiting for patients, contact tracing, isolation and home quarantine to begin proactive screening instead in Dharavi.

Prime Minister Narendra Modi on Saturday reviewed the COVID-19 situation across the country. He stressed on the need for widespread awareness about the viral infection.

The Delhi government has asked all the universities to evaluate students according to their previous academic record or come up with a progressive plan to grade students.

In a series of tweets, Maharashtra Home Minister Anil Deshmukh also said fines to the tune of over Rs 11 crore were collected from offenders during this period.

The central bank governor, while speaking at the 7th SBI Banking & Economics Conclave, said that COVID-19 has dented the existing world order, global value chains, labour and capital movements across the globe.

After 27,114 more people tested COVID-19 positive for the first time in a day, India’s overall count crossed 8 lakh on Saturday.

The World Health Organization said Friday that it is still possible to bring coronavirus outbreaks under control, even though case numbers have more than doubled in the past six weeks.

WHO chief Tedros Adhanom Ghebreyesus said the examples of Italy, Spain, South Korea and Dharavi, largest slum in Maharashtra, showed that however bad a outbreak was, the virus could still be reined in through aggressive action.

Dr Mike Ryan, head of the WHO’s emergencies programme, said that by extinguishing clusters of infection, the world could “potentially avoid the worst of having second peaks and having to move backwards in terms of lockdown”.

India, the third worst-hit country by the novel coronavirus, on Friday registered its highest single-day spike in COVID-19 cases with 26,506 new infections being reported in 24 hours. Additionally, the Union health ministry said that 475 deaths were also reported, taking the toll to 21,604.

The total number of cases rose to 7,93,802 on Friday, including 2,76,685 active cases, and 4,95,513 cured/discharged/migrated patients. The ministry also said that the recovery rate stands at about 63 percent.

Union health minister Harsh Vardhan on Friday said the recovery rate of COVID-19 patients in India currently stands at about 63 percent and asserted that India has not reached the community transmission stage, despite being a large country.

“Recovery rate among COVID-19 patients stands at about 63 percent. The mortality rate is just 2.72 percent. We are not concerned about the number of cases. We are ramping up testing so that maximum cases can be detected and treated,” he was quoted as saying by ANI.

In the meantime, the BSF on Friday said that 73 new coronavirus cases and 14 recovered/cured patients in the force were reported in the last 24 hours. The total number of positive cases in BSF stands at 1,659, including 927 recovered cases.

No COVID-19 vaccine till next year, officials tell MPs

A vaccine for COVID-19 is expected only by early next year, a parliamentary panel was informed on Friday.

The panel is chaired by senior Congress leader Jairam Ramesh, who, along with six other members, attended the meeting.

Sources said it was conveyed to the panel that a vaccine for COVID-19 could be available only by early next year.

This was the first meeting of the panel since the nationwide lockdown was imposed on 25 March.

Lockdown to be imposed in Pune, Pimpri-Chinchwad areas

In a bid to stem the spread of COVID-19, a 10-day lockdown will be imposed in Pune, neighbouring Pimpri-Chinchwad and a few other parts of the district in Maharashtra starting 13 July. The lockdown will come into force from midnight of 13 July and end on 23 July.

The decision to enforce the lockdown was taken in a meeting chaired by Maharashtra deputy chief minister and district guardian minister Ajit Pawar.

Various lockdown guidelines were extended by respective authorities in Kerala’s Thiruvananthapuram and in Maharashtra’s Kalyan-Dombivli, and Thane municipal areas as coronavirus cases continued to rise. This is in addition to the lockdown restrictions enforced in areas of West Bengal and Bihar.

Kerala’s COVID-19 tally inched towards 7,000, with 416 people testing positive on Friday in the highest single-day spike of the infection so far, as Chief Minister Pinarayi Vijayan warned that the situation was “becoming alarming”. He also said the triple lockdown imposed in Thiruvananthapuram corporation limits has been extended by another week. The state government had on Sunday decided to enforce the lockdown in the capital city following a spike in coronavirus cases.

In addition to the complete lockdown announced in Maharashtra’s Pune and Pimpri-Chinchwad, the Kalyan Dombivli Municipal Corporation (KDMC) announced the extension of the lockdown in the area till 19 July. The Thane municipal corporation also announced a similar extension.

“A special cleanliness campaign has been initiated from 10-13 July to create awareness about COVID-19, vector-borne diseases and other ailments. Under the campaign, door-to-door surveillance should be done and rapid antigen tests should be conducted in every household,” Adityanath was quoted in a statement  released by the government.

He said the number of lab technicians should be increased and 15,000 rapid antigen tests should be conducted per day.

During the meeting with officials, Adityanath said that a massive sanitisation should be undertaken to check the spread of coronavirus. He added that all ministers should monitor the campaign in their respective districts.

As many as 1,608 more people tested positive for COVID-19 in the last 24 hours in Andhra Pradesh, taking the coronavirus tally to 25,422.

Jharkhand reported 170 more COVID-19 cases taking the state’s tally of coronavirus cases to 3,362. The total number of active cases in the state stands at 1,129, while 2,210 patients have recovered so far.

Meanwhile, 115 more COVID-19 cases have been reported from Rajasthan on Friday. With this, the total number of cases in Rajasthan stands at 22,678, including 5,043 active cases and 17,140 recoveries.

Prisons across Maharashtra reported a total of 763 COVID-19 cases till date. The figure includes 596 inmates and 167 jail staff, informed the Maharashtra Prison Department on Friday.

The highest number of cases was reported from Nagpur Central Prison with 219 inmates and 57 jail staff testing positive for the novel coronavirus.

As many as 222 new COVID-19 positive cases and three deaths reported in the state police force in the last 48 hours. The total number of positive cases in the force now stands at 5,935 including 74 deaths and 4,715 recovered, said Maharashtra Police.

As many as 352 new COVID-19 positive cases reported in Bihar today taking the total tally in the state to 14,330 including 9792 recovered cases, the Bihar government said.

Odisha’s COVID-19 case tally rises to 11,956 with 755 new positive cases reported in the last 24 hours. The number of recovered patients in the state is 7,407, toll 56, said state health department.

Nine new cases of COVID-19 have been reported in Ladakh; two patients cured and discharged. COVID-19 active cases in the Union Territory has gone up to 1,064 (350 in Leh district and 714 in Kargil district), said the Department of Information and Public relations Leh, Ladakh.

Cases ‘more than doubled’ in six weeks,s ays WHO

“Today the world recorded 12 million cases. In the last six weeks cases have more than doubled,” said Director-General of the World Health Organisation (WHO) Tedros Adhanom Ghebreyesus on Friday.

Ghebreyesus was also quoted by News18 as saying, “In Vietnam, Cambodia, Thailand, New Zealand, Italy, Spain, South Korea and even in Dharavi, a densely packed area in Mumbai, a strong focus on community engagement and the basics of testing, tracing, isolating and treating all those that are sick is key to breaking the chains of transmission and suppressing the virus.”