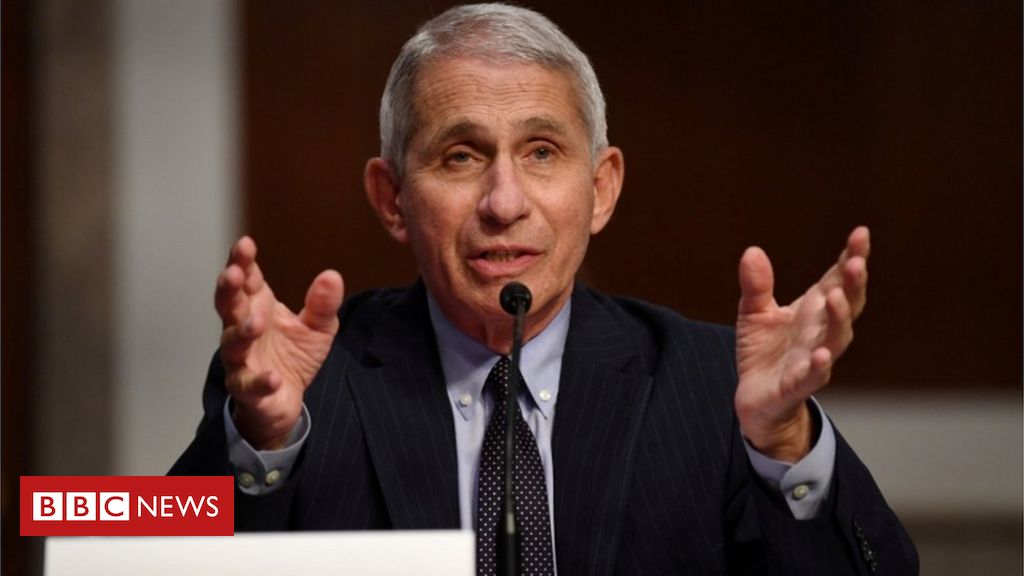 US infectious disease chief Dr Anthony Fauci is being targeted by the Trump administration as tensions rise between the health expert and the president.

The White House has been increasingly critical of Dr Fauci, and on Sunday, an official shared a list detailing past apparent erroneous comments.

Dr Fauci’s changing advice on masks and remarks on Covid-19’s severity are among the points from the White House.

The move to undercut him comes as the US continues to see surges in Covid-19.

There are over 3.3 million cases confirmed and more than 135,000 deaths nationwide, according to Johns Hopkins University.

Dr Fauci has contradicted President Donald Trump’s comments on the pandemic a number of times, pushing back on the president’s claims that the outbreak is improving and attributing hasty state reopenings to the recent surges.

The White House memo leaked over the weekend had noted “several White House officials are concerned about the number of times Dr Fauci has been wrong on things”.

Though the White House said Dr Fauci and Mr Trump have a “good working relationship” on Monday, Trump adviser Peter Navarro told CBS News: “When you ask me if I listen to Dr Fauci’s advice, my answer is only with caution.”

What has the White House said?

During a law enforcement event at the White House on Monday, Mr Trump said: “I have a very good relationship with Dr Fauci. I’ve had for a long time – right from the beginning.

“I find him to be a very nice person. I don’t always agree with him.”

The president added: “I get along with him very well. I like him personally.”

Mr Trump earlier on Monday retweeted comments from a game show host accusing “everyone”, including the US Centers for Disease Control (CDC), of lying about the coronavirus.

White House press secretary Kayleigh McEnany later told reporters Mr Trump still had confidence in the CDC and the tweet was meant to express his displeasure with “some rogue individuals” who leaked planning documents.

Echoing the contents of the anti-Fauci memo earlier, Mr Navarro, an economic adviser to Mr Trump, said Dr Fauci “has been wrong about everything I have ever interacted with him on”.

“When I warned in late January in a memo of a possibly deadly pandemic, Fauci was telling the media not to worry,” he said.

Mr Navarro said Dr Fauci fought against Mr Trump’s “courageous decision” to halt flights from China, initially said the virus was “low-risk” and “flip-flopped on the use of masks”.

“Now Fauci is saying that a falling mortality rate doesn’t matter when it is the single most important statistic to help guide the pace of our economic reopening.”

Admiral Brett Giroir, assistant US health secretary and member of the virus task force, told NBC News on Sunday that while he respects Dr Fauci, he is not always right.

“Dr Fauci is not 100% right and he also doesn’t necessarily, he admits that, have the whole national interest in mind. He looks at it from a very narrow public health point of view.”

The face of America’s fight against Covid-19

As cases and deaths continue to rise in a number of states, Mr Trump has been accused by critics of politicising health issues, including wearing masks.

Mr Trump has also clashed with the World Health Organization (WHO), accusing the body of mismanaging the pandemic when it began and failing to make “greatly needed reforms”.

On 7 July, he formally began to pull the US out of the WHO and said funding would be redirected.

A White House at war with its own experts

Donald Trump has often railed against newspapers that publish anonymous quotes from administration aides critical of the president. Over the weekend, however, the White House was using its own unnamed “officials” in a remarkable attack on a member of its coronavirus task force, top infectious disease expert Anthony Fauci.

The White House even provided a list of Fauci’s old statements about the virus similar to the kind of memo a campaign might use to direct negative attention on a political opponent. The administration, it appears, is trying to paint Fauci as wrong about the early threat of the virus and, consequently, untrustworthy when he questions the administration’s analysis of the current situation and its planned actions.

As if that wasn’t enough, on Monday morning the president retweeted a post by former game show host Chuck Woolery, accusing the Centers for Disease Control, among others, of lying about the virus in an effort to undermine the Trump’s re-election prospects.

An administration at war with its own scientific and medical experts in the middle of a pandemic that is once again on the upswing makes developing a cohesive strategy – one that the public trusts and will follow – challenging, to say the least.

More from Anthony: Things US has got wrong – and got right

What has Fauci said?

Dr Fauci has not weighed in on the White House memo, but he has remarked on his recent lack of television appearances.

“I have a reputation, as you probably have figured out, of speaking the truth at all times and not sugar-coating things,” he told the Financial Times on 10 July. “And that may be one of the reasons why I haven’t been on television very much lately.”

Dr Fauci also said he has not seen Mr Trump in person since 2 June and has not briefed him for the last two months.

The infectious disease chief has instead been appearing on livestreams and podcasts.

On 9 July, he told FiveThirtyEight: “As a country, when you compare us to other countries, I don’t think you can say we’re doing great. I mean, we’re just not.”

Dr Fauci participated in a livestream with Stanford University Medical School on Monday afternoon, but did not directly address the White House comments.

A New York Times/Siena College poll at the end of June found 67% of US voters trusted Dr Fauci regarding the pandemic, with just 26% expressing trust in Mr Trump.

Media captionProtest, rally or eating out – Where is riskier?
Did Fauci get things wrong?

In February, Dr Fauci did not advise Americans to change their behaviour due to the pandemic, but he did note the situation was evolving.

During an interview with the Today morning programme on 29 February, Dr Fauci said: “Although the risk is low now, you don’t need to change anything you’re doing, when you start to see community spread, this could change.”

At the time, there were fewer than 100 cases in the US.

In early March, Dr Fauci and other health officials did advise against having the public wear masks. He did, at the time, note that infected individuals should wear one to prevent spreading the disease.

Dr Fauci has defended his earlier comments on masks, citing new research and saying it was due to concerns over scarcity at the time for healthcare providers.

He has since strongly recommended wearing face coverings in public.

A career official, Dr Fauci has advised six presidents – Republican and Democratic – on health issues, including the HIV/AIDs epidemic.

He has been the director of the National Institutes of Health Allergy and Infectious Diseases division since 1984.