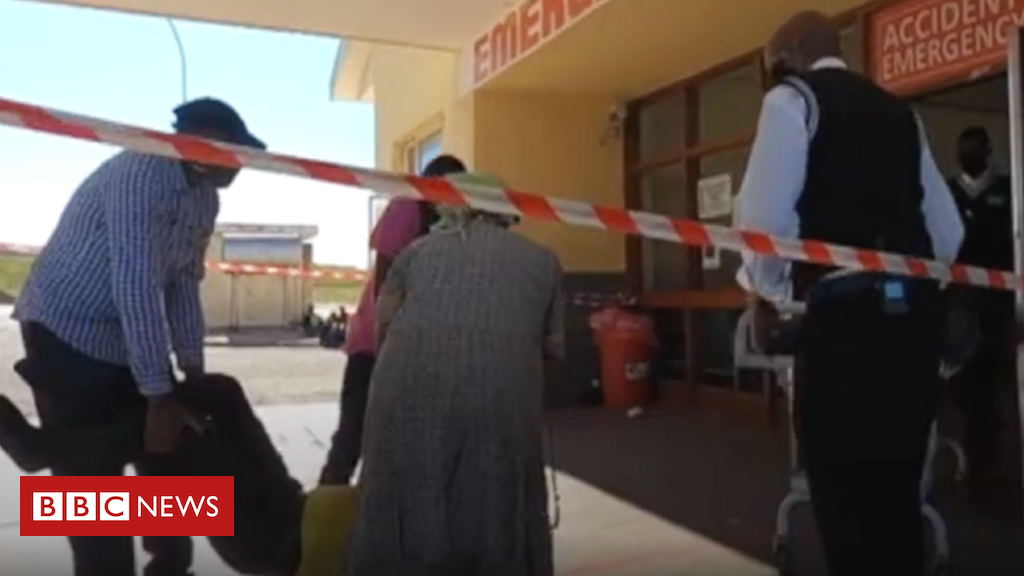 An exclusive, weeks-long BBC investigation inside filthy hospitals in South Africa has exposed an extraordinary array of systemic failures showing how exhausted doctors and nurses are overwhelmed with Covid-19 patients and a health service near collapse.

With key staff on strike or sick with coronavirus in the Eastern Cape province, nurses are forced to act as cleaners, surgeons are washing their own hospital laundry and there are alarming reports of unborn babies dying in overcrowded and understaffed maternity wards.

As doctors, unions and management fight over scarce resources, one senior doctor described the situation as “an epic failure of a deeply corrupt system”, while another spoke of “institutional burn-out… a sense of chronic exploitation, the department of health essentially bankrupt, and a system on its knees with no strategic management”.

The revelations come just as South Africa – which held the coronavirus back for months with an early, tough, and economically devastating lockdown – now sees infection rates soar nationwide, prompting President Cyril Ramaphosa to warn that “the storm is upon us”.

The health crisis, focused on the city of Port Elizabeth, raises fundamental questions about how those extra months were used, or wasted, by officials.

“There’s a huge amount of fear, and of mental and emotional fatigue. We were working with a skeleton staff even before Covid-19 and now we’re down another 30%,” said Dr John Black.

“Services are starting to crumble under the strain. Covid has opened up all the chronic cracks in the system. It’s creating a lot of conflict,” he said, confirming reports that patients had been “fighting for oxygen” supplies in a ward at Livingstone Hospital in Port Elizabeth.

Dr Black – one of only two infectious disease specialists in a province with a population of about seven million – was the only doctor in Port Elizabeth who agreed to talk to us on the record, but a dozen nurses and doctors spoke on condition of anonymity, fearing they would lose their jobs if they were identified.

At Livingstone Hospital – designated as the main Covid-19 hospital in the district – doctors and nurses described scenes “like a war situation” with blood and waste on the floors, a lack of Personal Protective Equipment (PPE), oxygen shortages, a severe shortage of ambulances, no ventilation and patients sleeping “under newspaper”.

Rats have also been spotted feeding on dark red hospital waste pouring into an open drain.

Hospital cleaning and other staff have at various gone on strikes

“Doctors scrabbled to do the most urgent of surgeries, portering, scrubbing the floors, working with one or two remaining nursing staff. Matrons were washing linen,” one doctor wrote by email.

“Every day I come to work in fear,” said a senior nurse who had just finished her shift.

“The [infection] numbers are going up. Every day we’ve got chaos. There are a lot of pregnant women all over the wards,” said another nurse.

Several doctors said staff had been left deeply traumatised by a recent episode where a maternity ward at Port Elizabeth’s Dora Nginza Hospital became so overwhelmed that several mothers and infants died.

“I was personally involved in the delivery of two dead infants and know there were more. This is very unusual. To have several mummies and babies dying in one week in one hospital is totally unheard of and unacceptable,” said one medic.

They were convinced the deaths were almost certainly the result of severe understaffing, which left many pregnant women waiting for days, sometimes lying in corridors, for urgent surgery.

Three other medical officials with knowledge of the relevant wards confirmed the reports of an unusual number of stillborn infants in recent weeks.

The sense of a deepening crisis has been compounded by a lack of proper management, which has seen departments turning on each other, and using Covid-19 as an “opportunity to air every grievance that ever happened”, according to one official.

Livingstone Hospital has been without a permanent chief executive officer or management team for a year and a half, after the last team was sacked for alleged corruption.

“We’ve been rudderless for some time now,” said Dr Black bemoaning the lack of “strong leadership” to stabilise escalating conflicts between different departments at the hospital, and, in particular, with local unions.

South Africa’s powerful unions have been extremely active in Port Elizabeth during the crisis. Laundry workers, cleaning staff, porters and some nurses have all – at various times – gone on strike.

The sudden, union-backed, closure of smaller clinics, in particular, has pushed more patients towards the city’s three big hospitals, quickly overloading them.

“We have seen unions shut down hospital after hospital. Each time one staff member or patient tests positive, all staff down tools. While all these union demands are being met, nothing happens… for up to two weeks,” one doctor complained.

“It’s not true at all that we’re exploiting the situation,” said Khaya Sodidi, provincial secretary of the nurses’ union, the Democratic Nurses Organisation of South Africa.

“Our nurses are overwhelmed, having to clean floors or cook because kitchen staff are not working. We cannot risk the lives or nurses. They’re human beings.”

President Cyril Ramphosa is leading the national effort against coronavirus

Several doctors defended the strike action, saying that frontline staff had been pushed to the limit, not just by Covid-19, but by years of exploitation.

“I’m grateful to the unions right now. Sometimes they focus on the wrong issues but at least they’re highlighting the problems,” said one senior doctor.

Another criticised the repeated closure of community clinics because of “one or two infections” as an “over-reaction,” but said the situation needed to be put in context.

“[Staff] have been chronically exploited, abused and neglected for years and now they’re being asked to do something that could potentially kill them. There’s an institutional burn-out,” said the doctor.

There is general agreement among unions and medical staff that the current crisis is the direct result of many years of systematic underfunding, mismanagement and corruption in one of South Africa’s most notoriously badly-run provinces.

Estimates vary, but Livingstone Hospital is currently fighting the pandemic with about a third of what’s considered appropriate staffing numbers.

Asked about these criticisms, the secretary general of the Eastern Cape’s Health Department, Dr Thobile Mbengashe, acknowledged “a number of very critical structural issues that are really affecting our response”, and said staff were “anxious, fearful… and overwhelmed.”

But he cited historic issues of underfunding dating back to white-minority rule, and insisted that his department was rising to the challenge of Covid-19.

“It’s very true that some of our teams are very stretched and actually stressed. But the health system in the Eastern Cape has not collapsed. We’ve really been building up [for the pandemic] and I think we are still on track and need to be given an opportunity to show we can do this,” he said.

A car manufacturer has built a clinic in Port Elizabeth

The provincial government has cited the rapid construction of a giant new coronavirus field clinic in Port Elizabeth by the German car manufacturer, Volkswagen, as a sign of effective public-private partnership.

But doctors at Livingstone hospital expressed some scepticism.

“They’ve got 1,200 beds, but only 200 are oxygenated, and there are currently only enough staff for 30 beds,” said one doctor, complaining that new staff were now being poached from Livingstone and other hospitals and that the VW facility had been opened before it was ready.

The speed with which VW built the facility has, in the eyes of many, simply underlined the provincial government’s own failings.

Two people with knowledge of the situation confirmed that the provincial health department was generally seen as so inept and dysfunctional that private donors, businesses and charitable funds anxious to help in the fight against Covid-19 were refusing to deal directly with it.

“You can’t administer anything through them because it’ll go missing. It all boils down to the fact that the department is dysfunctional beyond belief and has no money,” said one source.

As infection numbers rise across much of South Africa, the dire situation in the Eastern Cape offers some important lessons for other provinces.

One doctor cited a “culture of not wanting to discomfort your superiors which means people don’t often tell it like it really is.

Others spoke of a desire by government “to be seen to be doing the right thing”, rather than making tough decisions, citing the recent decision to resume community testing for Covid-19, despite the fact that it immediately pushed the entire testing system – including, crucially at hospitals – into a week-long backlog that rendered it almost useless.

But the clearest lesson from Port Elizabeth may well prove to be about human nature, and how we respond under extreme pressure.

The dutiful, the fearful and the obstructive

It appears that staff at Livingstone hospital, for instance, have split into three distinct groups:

There are a small number of the “willing,” who still turn up for work, despite the risks, out of a profound sense of duty. “I can’t say I will give up. They are our families, our children, our mothers,” said one nurse of her patients.
There is a second group of people whose fear and frustration has overwhelmed them and who are not prepared to return to work. “They’re not necessarily unwilling, they’re just afraid,” said a doctor.
And then there is a third group. “The plain obstructive – a huge element, passive or overtly aggressive,” said another source. For them, any sense “of altruism, or duty, has gone. It went a long time ago”.

Don't Miss it How coronavirus placed more attention on the wildlife trade | The World
Up Next Coronavirus: Video showing Toronto restaurant patrons crammed together triggers investigation