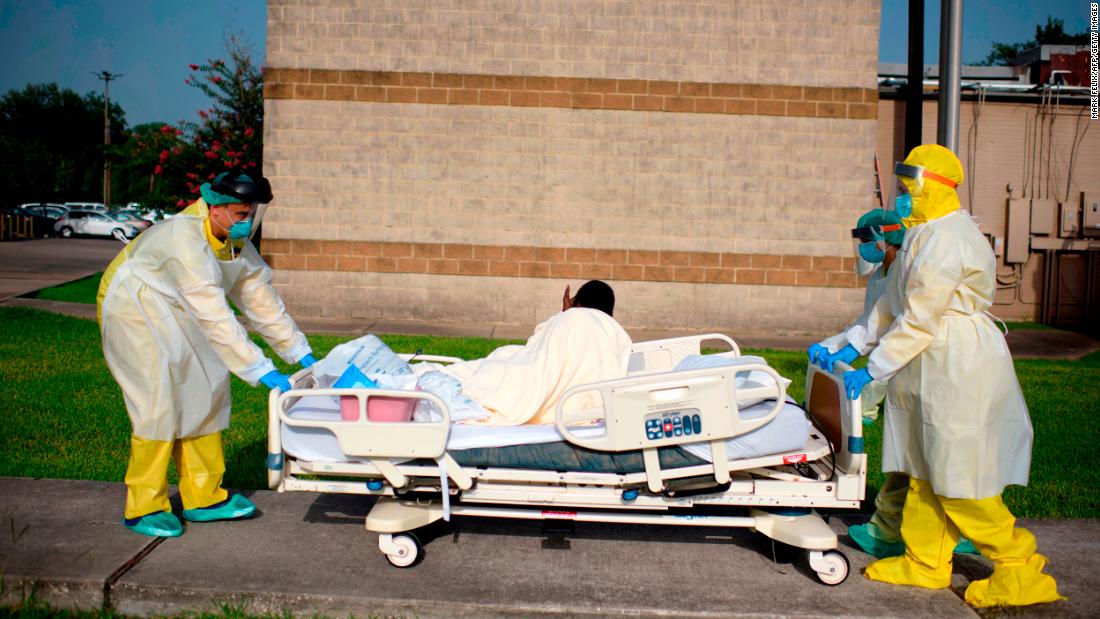 On July 16, the country reported its latest single-day record with at least 77,255 new cases, according to Johns Hopkins University data. The second highest number was reported a day later: 71,558. On June 16, with most states deep into their reopening plans, the country reported more than 23,700 cases of the virus. After what some saw as hopeful dips in cases, states across the South and other parts of the country warned of an increase in young people testing positive. Images were emerging of crowded beaches and parties, despite experts cautioning Americans to stay home as much as possible.Around that time, Florida reported nearly 4,000 new cases in a day, a record single-day increase back then. The state has since grown to become the country’s hotspot, reporting more than 10,300 new cases Saturday.Now, officials largely point to gatherings and crowded bars as some of the major drivers of the surge. To prevent further spikes, parts of the country — including Arizona, California and Texas — have closed bars back down. Local leaders have begun pushing schools to remote instruction in the fall, after outcries from terrified parents and educators. Across the country, more mask requirements are going into effect, despite consistent backlash from some Americans. Face masks, experts have said, are the most powerful weapon against the virus. With the surge in cases, models are projecting more than 150,000 American deaths will be linked to the virus by August 8, according to an ensemble forecast published by the CDC. The previous forecast published July 9 projected roughly 147,000 deaths by August 1.

At least 140,120 Americans have died of the virus, according to Johns Hopkins University.

Florida Gov: no prosecution for those not wearing masks

In Florida, Gov. Ron DeSantis has resisted implementing a statewide mask mandate and said Saturday the state would not be “prosecuting people” for not wearing masks.

When asked about the possibility of stricter face mask regulations throughout the state, DeSantis said face coverings have been advised since the state’s first phase of reopening.

In the Miami area, which one expert called the epicenter of the virus last week, Miami-Dade Police will be giving citations for anyone violating the county’s mask requirement.The governor’s remarks come a day after Dr. Anthony Fauci, the nation’s leading infectious disease expert urged governors and mayors to be “as forceful as possible” to get Americans to wear face coverings.

“When you’re living your life and trying to open up the country, you are going to come into contact with people. And for that reason, we know that masks are really important, and we should be using them everywhere,” he said.

Experts say Florida’s numbers are trending in an alarming direction. In Miami-Dade County, ICUs are at about 122% capacity, according to county data. In the past two weeks, the county has seen a 40% increase in the number of coronavirus patients being hospitalized and about a 64% increase in the use of ventilators, according to the data.”It’s really a crisis moment at (Jackson Memorial Hospital,)” Martha Baker, the president of a union representing healthcare professionals, told CNN affiliate WFOR. “And we’re just, I say dancing on the head of a pin, hoping we can keep dancing.” The hospital is in Miami.

“Fifteen nurses in the ICUs alone called in sick today, just at Jackson Main,” she told the affiliate. “They’re exhausted. They’ve been doing this since March.”

In Texas, similar calls for help come from healthcare professionals as cases continue to climb across the state.

“At any given time if 1.5% of the population had Covid disease, that would fill every single adult hospital bed in the city, leaving no room for heart attacks and strokes and pregnant women who are having their babies and car accidents and everything else that continues to go on,” said Dr. David Persse, with the Houston Health Department, according to CNN affiliate KPRC. Harris County, where Houston is located, has reported more than 54,800 cases of the virus.

And for the fifth day in a row, the state of Texas reported more than 10,000 new cases in a day, according to state data. The 10,158 new cases reported Saturday bring the state’s total case tally to at least 317,730.

Texas Gov. Greg Abbott, who once pushed for one of the most aggressive reopenings, has in recent weeks advocated continuously for the use of face masks to help businesses stay open.

Earlier this month, he issued an executive order requiring residents in counties with 20 or more active cases to wear face coverings in public. That order took effect July 3. These are the states requiring face masks

How long should you isolate for?

Meanwhile, the CDC updated its guidance for people who are isolating at home to prevent transmission of the coronavirus.

Someone who has tested positive for the virus and has symptoms may discontinue isolation 10 days after the symptoms first appeared as long as 24 hours have passed since the last fever without the use of fever-reducing medications and if symptoms such as coughing and shortness of breath have improved.

People with coronavirus symptoms isolating at home and with access to tests can leave isolation if a fever has passed without the use of medication, if there is an improvement in symptoms, and if tests taken more than 24 hours apart come back negative, according to the guidelines.

For those who have tested positive but have no symptoms, the CDC had two options: a time-based strategy and a test-based strategy.

A person without symptoms can discontinue isolation 10 days after the first positive test and if they have not subsequently developed symptoms. If a person develops symptoms, then the symptom-based or test-based strategy should be used, according to the guidelines.

People who have tested positive for the virus and are asymptomatic can also discontinue isolation if the results of two tests taken more than 24 hours apart come back negative.

Don't Miss it NSW faces a greater risk of a second COVID-19 wave than Victoria
Up Next Coronavirus infections: A question of social status | COVID-19 Special