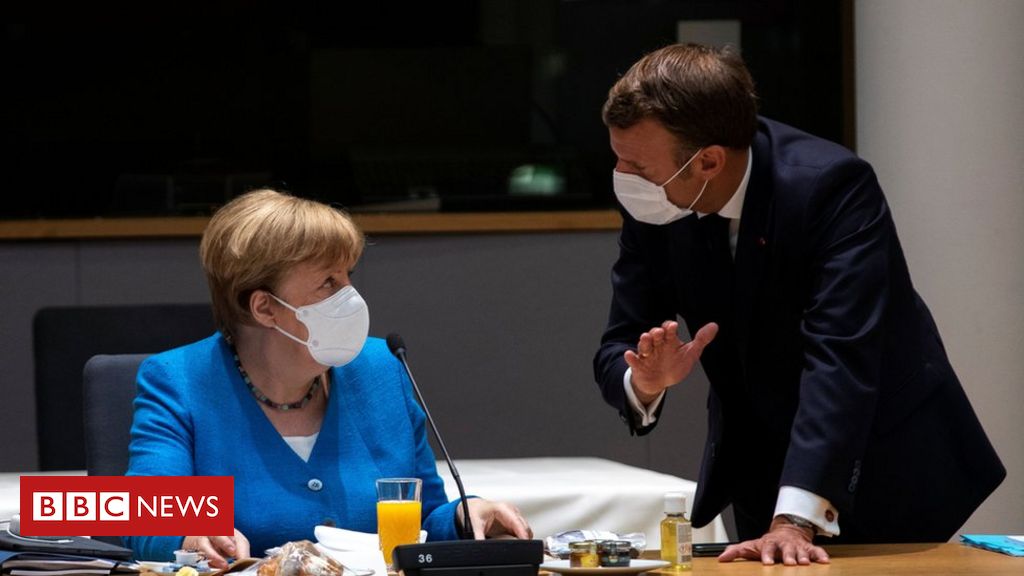 EU leaders trying to hammer out a huge post-coronavirus economic recovery plan are now in an unscheduled third day of a testy summit in Brussels.

Some member states believe the proposed €750bn ($857bn; £680bn) package is too large and should come as loans, rather than grants.

Austria said there was still a “way to go”, while Hungary’s PM lashed out at his Dutch counterpart.

Germany’s Angela Merkel said a deal might not be reached on Sunday.

With the impasse still unbroken on Sunday evening, President of the European Council Charles Michel reminded the leaders that 600,000 people had died of the virus worldwide and he hoped that the “headline tomorrow is that the EU has accomplished mission impossible”.

The World Health Organization (WHO) said on Saturday that new cases rose by almost 260,000 in 24 hours.

Officials said this was the largest single-day increase since the pandemic began, and the first time the number of new daily infections has surpassed a quarter of a million. The previous record rise in new confirmed cases was recorded by the WHO just one day earlier.

The total number of confirmed cases of coronavirus passed 14 million on Saturday, according to the tally kept by US-based Johns Hopkins University.

How are the EU talks going?

EU leaders first met on Friday in Brussels to discuss the bloc’s €1 trillion seven-year budget and the planned stimulus package to help countries recover the pandemic.

It is the first face-to-face meeting between leaders since governments began imposing lockdowns in a bid to stop the spread of the virus in March.

Member states are split between those hit hardest by the outbreak, and those concerned about the costs of the recovery plan.

Some northern nations like the Netherlands and Sweden have balked at the package, arguing it should take the forms of loans not grants.

But nations including Italy and Spain are desperate to revive their shattered economies, and have accused the EU of not doing enough to help countries hit by the pandemic. Italy in particular was one of the earliest European countries to suffer an outbreak and has recorded 35,000 deaths – one of the highest tolls in the world.

Italian PM Giuseppe Conte said Europe was “under the blackmail of the ‘frugals'” and described negotiations as “heated”.

Hungarian PM Viktor Orban accused Dutch PM Mark Rutte of a personal vendetta and of trying to link financial help to political issues. Mr Orban, and his ally Poland, have threatened to veto the package if it adopts a policy of withholding funds from nations who do not meet certain democratic principles.

Austrian Chancellor Sebastian Kurz said there was “a way to go” but that it was possible a deal could be achieved.

Mrs Merkel said: “I still cannot say whether we will find a solution. There is a lot of goodwill but also many different positions.”

Where is Europe at with the virus?

Many European nations have ended lockdown restrictions, but the virus remains a major threat.

Officials are facing localised outbreaks across the continent, with the largest appearing in Spain’s north-eastern region of Catalonia. About four million people in ​​Barcelona, ​​La Noguera and El Segrià have been ordered to stay at home for 15 days.

Among the measures imposed are a ban on public or private meetings of more than 10 people; a ban on visits to nursing homes; and the closure of gyms and nightclubs.

EU budget commissioner Johannes Hahn tweeted a “solemn reminder” on Saturday that the pandemic was “not over”.

“High time to reach an agreement which allows us to provide the urgently needed support for our citizens and economies,” he wrote.

How is the virus spreading elsewhere in the world?

WHO officials said the largest increases in cases on Saturday were in Brazil, India, South Africa and the US.

Florida is currently the epicentre of the US epidemic. The state recorded more than 10,000 new infections and 90 more deaths on Saturday, bringing its total number of cases to more than 337,000 and its death toll to more than 5,000.

In Brazil, where the coronavirus and measures to contain it have been highly politicised, cases continue to surge – although the WHO announced earlier this week that infections were no longer increasing exponentially.

Scientists have also warned that India could still be months away from the peak of its outbreak – despite already having the third-highest number of confirmed cases. Hospitals in the worst-hit cities, including Mumbai and Bangalore, have been overwhelmed with patients.

India recorded another 34,884 infections in a 24-hour period on Saturday, and another 671 deaths linked to coronavirus.

And South Africa, which saw one of the largest single-day rises in cases, has the highest number of confirmed infections on the African continent.

Don't Miss it Coronavirus: How should I wear a face covering? – BBC News
Up Next Vancouver protesters rally against masks, but experts say they slow COVID-19