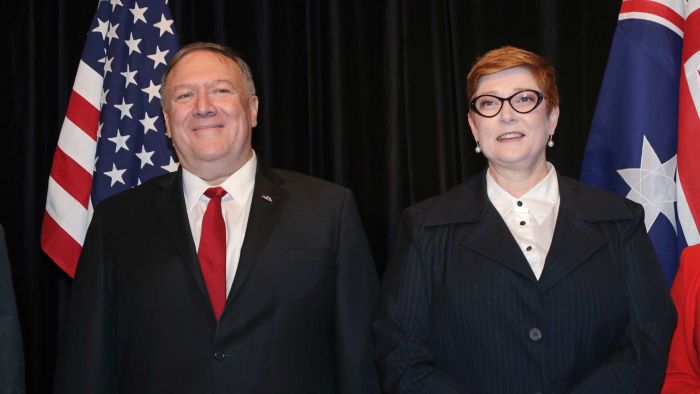 Foreign Minister Marise Payne and Defence Minister Linda Reynolds will fly to Washington for annual talks with their US counterparts next week, forcing both frontbenchers into quarantine on their return to Australia.

Key points:The ABC has been told the decision to travel was “not taken lightly” by the ministersThe US ambassador said it would be “one of the most consequential AUSMIN meetings in decades”Pompeo warned “if the free world doesn’t change Communist China, Communist China will change us”

It will be the first overseas visit by Morrison Government ministers since Australia shut its international borders in March.

Senator Payne and Senator Reynolds will meet US Secretary of State Mike Pompeo and Defence Secretary Mark Esper to discuss national security and coordinating government responses to the coronavirus pandemic.

But the rapid spread of COVID-19 through the United States also poses a significant risk to the delegation, with the country passing 4 million cases earlier this week.

The ABC has been told the decision to travel was “not taken lightly” by the ministers.

The Australian ministers will meet with US Secretary of Defence Mark Esper.(AP: Manuel Balce Ceneta)

However, the Morrison Government has calculated that the talks will be critical to boosting security cooperation with the US, as well as intensifying joint efforts to tackle escalating threats posed by online disinformation campaigns and cyber attacks.

US officials have also been pressing the ministers to attend in person, saying a visit during the pandemic would signal how strong the US-Australia alliance remains.

“This 30th AUSMIN meeting comes at a critical time, amid significant strategic challenges, and a global pandemic with far-reaching social and economic impacts,” the ministers said in a joint statement.

“Our relationship is built on our shared values, and a shared understanding of the importance of maintaining presence and leadership in our region.

“In the face of an increasingly complex and contested regional environment, it is vital we continue working together across the breadth of our relationship.”

The ministers will be accompanied by a smaller-than-usual delegation, including the Chief of the Defence Force, Department of Foreign Affairs and Trade (DFAT) secretary Frances Adamson and Defence secretary Greg Moriarty.

US officials have been pressing the ministers to attend in person to demonstrate the strength of the bilateral relationship.(Jonathan Ernst/Pool Photo via AP)

The delegation will take precautions to try and protect themselves from the coronavirus pandemic in Washington, including through social distancing.

The ministers and senior officials will spend 14 days in quarantine when they return to Australia, although the Morrison Government has not said whether that will be enforced at home or at other accommodation.

Expectations for the meeting are running high, with US ambassador Arthur Culvahouse Jr declaring yesterday that it would be “one of the most consequential AUSMIN meetings in decades”.

The two nations are hoping to make new announcements to combat coronavirus in the region, as well as strengthening supply chains for critical goods like medical equipment.

The Government wants to manufacture more munitions in Australia and is likely to seek technical assistance from the US to build up its military-industrial base.

The two nations will also discuss China’s activities in the South China Sea, the development of Australia’s rare earths industry, and Beijing’s crackdown on Hong Kong.

But Senator Payne and Senator Reynolds are also likely to distance Australia from some of the starkly confrontational rhetoric adopted by key members of the Trump Administration.

Earlier this week, Mike Pompeo accused Beijing of “tyranny” and warned that “if the free world doesn’t change Communist China, Communist China will change us”.

Australia also remains at odds with the Trump Administration over its withdrawal from a suite of multilateral institutions, as well as over trade issues.

Yesterday, Australia’s ambassador to the United States Arthur Sinodinos said the resurgence of protectionism in the US posed a threat to its industries.

Mr Sinodinos said Trump supporters felt they had “missed out” on the benefits of globalisation.(AAP: Daniel Munoz)

“In talking with the [Trump] Administration, they tend to say these costs aren’t as big as people think, or it’s at the margin. But I think the costs … end up being larger than you think,” he said.

“Often they’re dynamic costs, not just the cost at a point in time. It’s the impact tariffs have in creating industries that become inward-looking or fragmented.”

Mr Sinodinos also said that many Trump supporters felt they had “missed out” on the benefits of globalisation, comparing them loosely to Black Lives Matter protesters who “often feel the impacts of inequality”.

But he stressed he retained enormous faith in the United States and said he was confident it would be able to bounce back from the twin shocks of the pandemic and mass unrest.

Ashley Townshend from the United States Studies Centre said both countries should use the opportunity to deepen discussions on a “collective approach to deterrence and defence in the Indo-Pacific”.

“Put simply: the US can no longer uphold a favourable balance of power on its own, which means that likeminded partners such as Australia, Japan and key South-East Asian countries must contribute more purposefully to a multilateral regional military strategy,” he said.

“This should include providing more direct operational and intelligence support to nations on the frontline of Chinese coercion in the South-East Asia and the Pacific.”