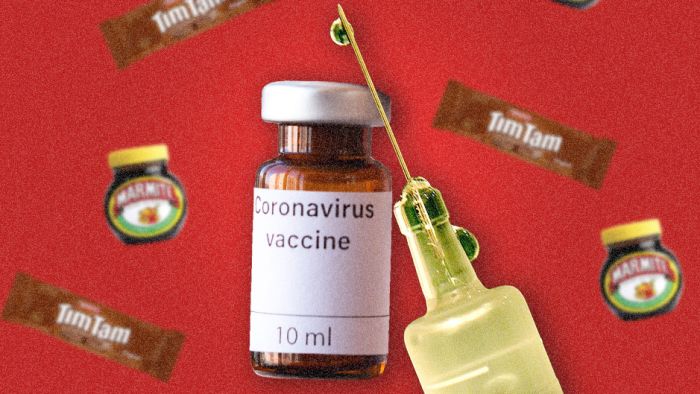 First it was Tim Tams. Then it was Marmite. Could a coronavirus vaccine be next?

The footage of UK Prime Minister Boris Johnson using a packet of Tim Tams to kickstart formal negotiations for a new free trade agreement with Australia is the proverbial ship that launched a thousand memes.

But there’s a chance — an outside one — that the next image out of the UK could be the mop-haired Eton graduate brandishing an all-important vial of medicine, saying: “Here it is, mate, and it’s coming to you.”

Replace Tim Tams with the coronavirus vaccine? The Australian Government has this week been in talks with the UK.(Supplied: YouTube)

This week, the global search for one of the most important medical prizes ever entered a new chapter.

The UK’s Oxford University, considered one of the leaders in the search for a COVID-19 vaccine, announced its candidate is safe and has produced an immune response in early-stage clinical trials.

The UK Government has committed to producing 100 million doses of the Oxford vaccine candidate, if it is successful.

It came amid further news this week that the UK, which has been ravaged by the disease, signed two separate deals, one with a French company and the other with global pharma giant Pfizer — understood to be at least in the hundreds of millions of dollars — to receive as many as 130 million doses of possible coronavirus vaccines.

Though all three vaccine candidates might not be successful, the deals effectively reserve supply for the UK if they are.

Back in Australia, the moves understandably triggered a question: so the UK has its plan … but what are we doing?

Australia has invested $5 million in the University of Queensland vaccine candidate — which entered into human trials earlier this month.

It has also invested $19 million to help with vaccine development, and claims it has spent $256 million in “vaccine-related activity”.

But no formal commercial arrangement like the UK’s has yet been announced in Australia.

And according to vaccine expert and Federal Government advisor Tony Cunningham, the UK’s strategy is something the Government needs to consider.

“We’re in an interesting position at the moment,” he told the ABC. “And I do think we need to look closely at what the UK’s been doing.”

“But the issue is, and numerous experts have said this, we just don’t know what’s going to win — we don’t know which type of vaccine is going to be best.”

And he would know.

Billions are being poured into the race to find a coronavirus vaccine, with the winner owning a powerful political tool. During the last pandemic an Australian company got there first.

He’s now director for virus research at The Westmead Institute for Medical Research and lead author of the Australian Academy of Science’s vaccine advise to the Government, where 21 Australian-based scientists and researchers outline which vaccines they think are “most promising”.

But it’s a crowded field.

There are now more than 200 COVID-19 vaccine candidates across the world, with 22 in clinical trials.

Professor Cunningham described it as like an “upside-down triangle”.

“And, eventually, as the triangle gets smaller, you’ve got to back one in,” he said.

“But, maybe, the first vaccines may not be the best.”

At the moment, although not sitting on its hands, it appears the Government is taking that “wait-and-see” approach, and backing in more global initiatives.

COVAX is an alliance that includes the Bill Gates-funded Coalition for Epidemic Preparedness Innovations and the World Health Organization, to fund a “global response” to accelerate the development, production and equitable delivery of COVID-19 vaccines.

But despite this approach, there do appear to be alliances forming — and Australia is manoeuvring.

The Government this week confirmed it was discussing “international licensing arrangements for COVID-19 vaccines” with the Johnson Government, which would allow Australia to “access and supply” vaccines developed in the UK.

Yet, some experts have questioned whether countries such as China or Russia — both of whom have been accused of cyber attacks on US and UK vaccine research arms — would be as forthcoming with any vaccine breakthroughs.

“Right from the very first G20 meeting that we held many months ago, there was quite a strong commitment to ensure that [when] someone finds it, we’ve got to make it available,” Mr Morrison said.

“And any country that would hoard a vaccine discovery, I think, would not be met with welcome arms by the rest of the world.”

There are more than 200 active coronavirus vaccine candidates worldwide.(AAP)What about manufacturing?

Further questions have been raised this week about Australia’s capability to produce a vaccine quickly for mass distribution.

Some vaccine technologies, such as the mRNA technology being developed by Monash University, can’t yet be manufactured in Australia.

It is because Australian medical supply and vaccine company CSL — the only company in Australia with mass vaccine manufacturing capabilities — only creates a certain type of influenza vaccine.

But it has put up its hand to move into the new areas of vaccine manufacturing.

CSL says it is working to move into different areas of vaccine manufacturing.(Supplied: CSL)

The Prime Minister said he was confident “in the majority” of cases that CSL would be able to reproduce vaccines locally.

CSL told the ABC the UQ vaccine — which it has committed to manufacture — was its priority,

However, CSL product development vice-president Anthony Stowers said the company was committed to “leveraging [its] skills and manufacturing capabilities” to support the development of any vaccine candidate

“This includes the capacity to undertake the “downstream” aspects of vaccine production, such as processing licensed vaccine material into vials at our [facilities] in Melbourne,” Dr Stowers said.

“We are exploring ways to support the manufacture of other vaccines under development and will keep discussions open.”

But despite all the manoeuvring and global uncertainty, Professor Cunningham said he was confident Australia was in a good position.

“We don’t know which particular strategy will work best — there are so many unknowns,” he said.

“But I will say I am enthused by how well the Government has been listening to the scientists.

“And looking around the world, I wouldn’t want to be anywhere else.”

Don't Miss it Coronavirus live news: record daily rise in global cases with almost 285,000 new infections | World news
Up Next Humans are mutating COVID-19 virus, but it is fighting back, scientists say