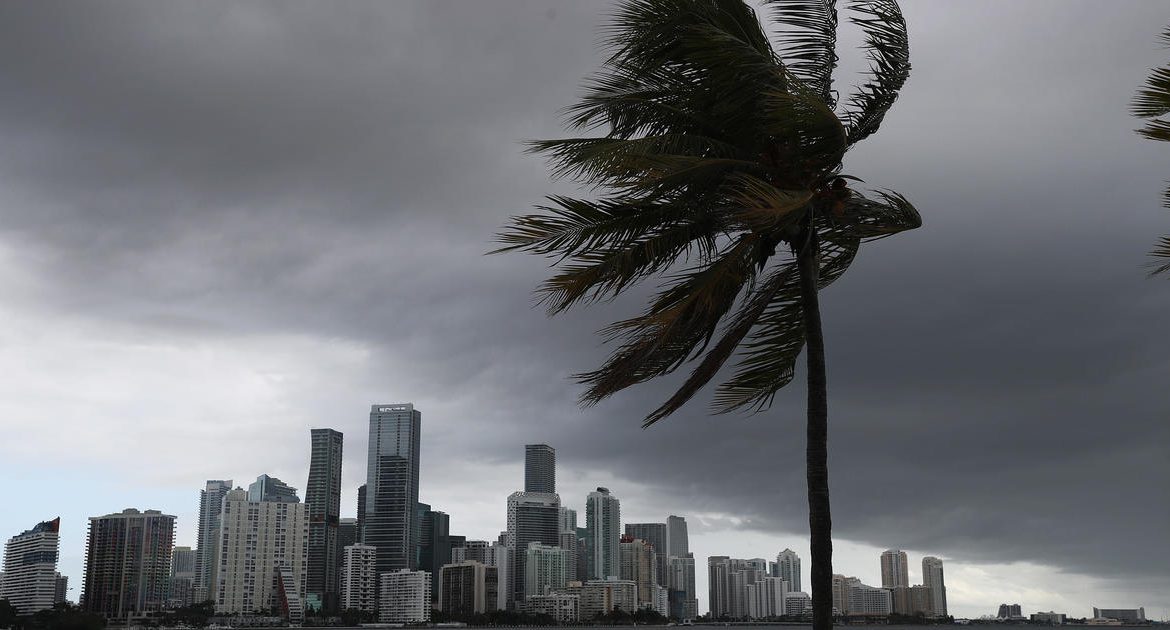 Florida, which is continuing to battle a coronavirus surge, is now preparing for Tropical Storm Isaias – complicating efforts to contain the virus. The entire east coast of Florida is bracing for potential impacts: anything from strong winds to flooding rains and storm surge, CBS News’ Manuel Bojorquez reports.

Isaias was downgraded Saturday evening to a tropical storm as it moved within 115 miles of Fort Lauderdale with maximum sustained winds of 70 mph. The storm is expected to restrengthen into a hurricane overnight as it approaches the southeast coast of Florida, according to the National Hurricane Center.

“On the forecast track, the center of Isaias will move over the Straits of Florida tonight, and approach the southeast coast of Florida early Sunday morning,” the National Hurricane Center says. “Isaias is then forecast to move near or along the … east coast of the Florida peninsula Sunday and Sunday night.”

It is expected to remain a hurricane through Monday.

The storm is approaching Florida as the state saw record numbers of deaths due to COVID-19 this week, reporting 257 new virus-related deaths on Friday – the fourth straight day it reported a record-high, single-day death toll.

Storm clouds are seen over the city as Hurricane Isaias approaches the east coast of Florida on August 1, 2020 in Miami, Florida.

Florida’s governor has declared a state of emergency, urging residents to have seven days worth of food, water and medicine ready, but also facial coverings and hand sanitizer as the potential disaster is merging with the COVID-19 crisis.

State-run testing sites in some areas are closed ahead of the storm until next week, hampering efforts to track the virus.

Some Miami-Dade County hurricane shelters are on standby, with the potential to provide separate quarters for those who are currently infected. Florida Governor Ron DeSantis said Saturday that “non-congregate options” have been made available for people who may be experiencing COVID-19 symptoms.

He also state’s Division of Emergency Management is sending 25 shelter kits with PPE to counties in the path of the storm. Each kit will have enough PPE for up to 400 people for four days.

“We still don’t think there is a need to open shelters for this storm, but they are ready,” Miami Mayor Carlos Giménez said on Friday.

A hurricane warning was in effect as of early Saturday for Florida’s east coast from Boca Raton, just north of Miami, to the Volusia-Brevard county line. A hurricane watch was in effect from Hallendale Beach to south of Boca Raton. Miami officials said they were closing beaches, parks and marinas.

“This is something that’s an evolving situation and we know we are going to get some impacts. What shape those impacts take remains to be seen,” he said at a press conference.

He said the state has a supply of personal protective gear at the ready, as well as generators for nursing homes at risk of losing power. According to DeSantis state officials are in contact with hospitals, but didn’t anticipate that any will need to move patients, including coronavirus patients.

A woman prepares sand bags for distribution to the residents of Palmetto Bay near Miami, on July 31, 2020 as Floridians prepare for Hurricane Isaias.

Isaias has already battered parts of the Caribbean, including the Bahamas and some of the islands that were devastated by Hurricane Dorian last year. It also hammered parts of the Dominican Republic and Puerto Rico, where the National Guard rescued at least 35 people from floodwaters that swept away one woman who remains missing.

In the Dominican Republic, officials reported that a man died when he was electrocuted by a fallen electrical cable. Over 5,000 people were evacuated, and as of early Saturday, floodwaters had cut off over 130 communities.

As the storm travels north, the governors of North Carolina and Virginia have already declared states of emergency – with North Carolina ordering evacuations from some coastal areas.

“A hurricane during a pandemic is double trouble,” said Governor Roy Cooper. “But the state has been carefully preparing for this scenario, so that we can do our best to keep people safe from the weather as well as the virus.”

Holden Beach and Ocean Isle Beach, which are close to the South Carolina border, and Hatteras Island and Ocracoke Island, which make up part of North Carolina’s Outer Banks region, were placed under mandatory evacuations on Saturday.

The concern is not just along the coast but also areas inland that could see strong winds and flooding rains.

Don't Miss it Coronavirus: What’s happening around the world on August 1
Up Next Travel and migration: Latest news from the COVID-19 pandemic | Coronavirus Update