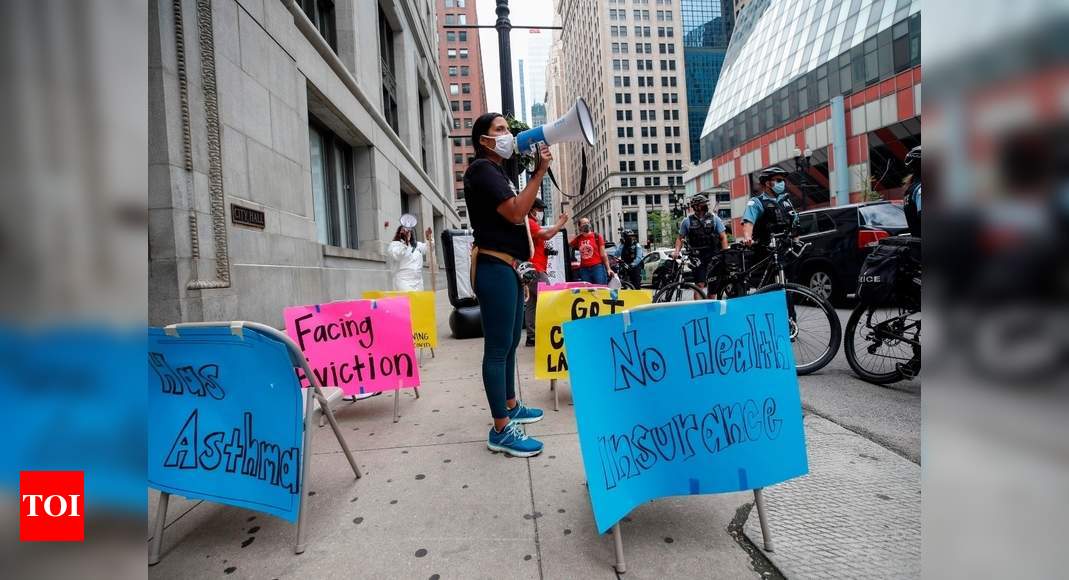 CHICAGO: Teachers at dozens of school districts protested from their cars on Monday over plans by some US governors to resume in-class instruction during the coronavirus pandemic, while Arizona, Florida, California and Texas saw declines in new cases.
The teachers, who painted messages on their cars and formed caravans with other school employees, want instruction conducted online until testing shows that classrooms are safe and districts hire more nurses and counselors.
The Milwaukee Teachers’ Education Association, the union representing public school teachers statewide, posted pictures on Twitter of protesters making cardboard gravestones with messages such as “Here lies a third grade student from Green Bay who caught Covid at school” and “RIP Grandma caught Covid helping grand kids with homework.”
Teachers in Chicago, Milwaukee and Philadelphia honked their horns in car protests. Demonstrators rallied outside the Los Angeles Chamber of Commerce building, and in Connecticut about 400 formed a car march that passed Governor Ned Lamont’s home.
“I do not want to put my students or myself in harm’s way. I do not want to be an experiment,” Chicago elementary school teacher Andrea Parker told reporters.
More than 155,000 people have died nationwide from Covid -19 since the virus was first identified in the United States in January. Cases nationally fell for a second week in a row but rose week-over-week in 20 states, including Missouri, Montana and Oklahoma.
Deaths in the United States rose for a fourth week in a row to more than 8,500 people in the seven days ended Aug. 2, a Reuters analysis found.
Arizona, California, Florida and Texas,US states with some of the largest populations, saw fewer cases and hospitalizations.
Californian Governor Gavin Newsom said intensive care unit admissions were also down in his state but it was too early to celebrate.
“This virus is not going away,” Newsom said at a briefing. “It’s not going to take Labor Day weekend off or Halloween off or the holidays off. Until we have a vaccine, we are going to be living with this virus.”
The governor said the decline was not enough to merit a change in his order that Californian schools begin the August term with online learning.
The Los Angeles teachers union and education officials on Monday agreed to a plan for resuming online-only classes later this month in the nation’s second-largest school district.
Schools are at the center of negotiations between Democrats in Congress and the administration of President Donald Trump over a coronavirus economic relief bill. Democratic leaders and White House negotiators both said on Monday they had made progress in those talks, though the administration said Trump could act alone if no deal is reached.
With Democrat Joe Biden leading in polls ahead of the November presidential election, Trump, a Republican, has made school reopenings part of his re-election campaign.
Dr. Anthony Fauci, the US government’s top infectious disease expert, said in an interview with the Journal of the American Medical Association on Monday that states with spiraling case numbers should consider re-imposing lockdown restrictions on residents and businesses.
But Fauci told a news conference with Connecticut’s Lamont that he favored getting students back in class, citing negative psychological impacts of keeping them home as well as the role schools play in feeding children.
“The default position should be to try as best as you possibly can to open up the schools for in-person learning,” Fauci said.
Previously hard-hit parts of New York and New Jersey with dense populations have seen an increase in new cases in recent days, prompting New Jersey Governor Phil Murphy to reduce indoor limits to 25 people per room from 100.
New York Governor Andrew Cuomo said he would announce later this week whether to reopen schools in his state, which has recorded by far the greatest number of Covid -19 deaths, more than 32,000.