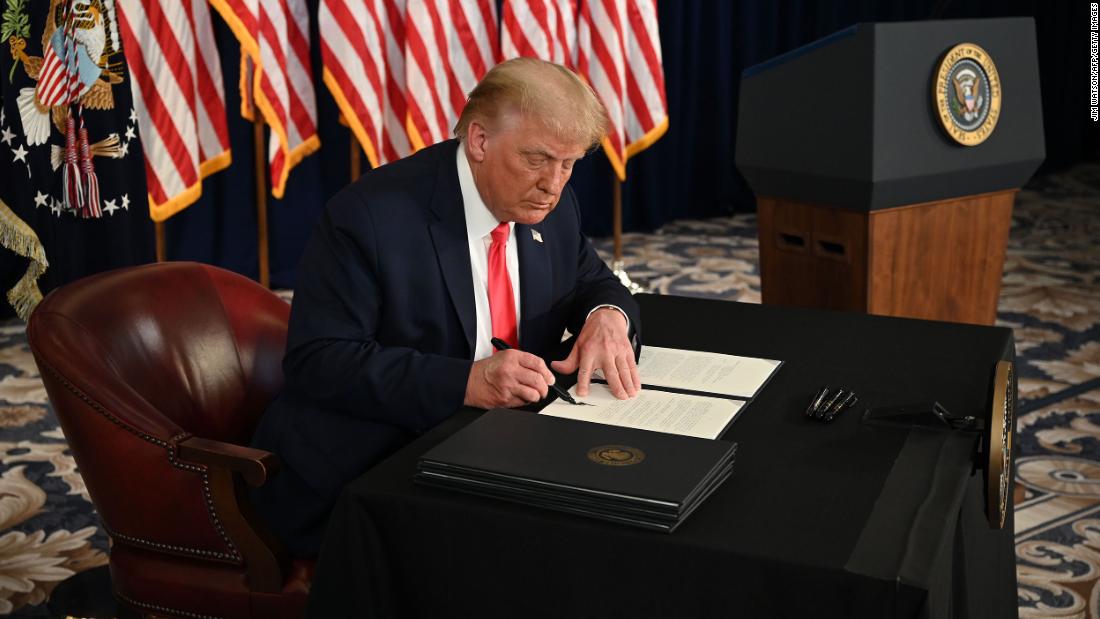 Here’s a breakdown of the actions, the many strings attached and questions about what they actually accomplish.

Trump described the memorandum signed Saturday as an action providing “an additional or extra $400 a week and expanded benefits.”

But in reality, the additional unemployment aid is more complicated than the White House acknowledged and experts say it may not help a lot of the unemployed.

States are in dire financial straits. Many states have already asked the federal government for major financial help. Several experts told CNN there are major questions about how many states may be able to afford the extra cost.

If a state says that it does not have the funds or does want to enter into the agreement with the federal government, the unemployed person in that state receives zero dollars in extra federal benefits (they would still receive the normal state unemployment insurance).

In fact, states have asked Congress to provide them with an additional $500 billion to help shore up their budgets, which have been crushed by the loss of tax revenue amid the pandemic. This has been one of the main points of contention between Democrats, who want to allocate additional aid, and Republicans, who don’t want to bail out what they say are badly managed states.

Requires a new system. Because Congress has not authorized an extension of extra federal unemployment assistance, the state will have to set up an entirely new system to deliver the additional aid.

“The state has to enter an agreement saying not only can they pay the benefit, but that they have some ability to administer the benefit,” said Michelle Evermore, an unemployment expert at the National Employment Law Project.

Few will be helped. Evermore, one of the nation’s leading experts on unemployment, told CNN she considered the chances of this effort helping many of the newly unemployed due to Covid-19 “low.”

Lastly, according to the memorandum, an individual can only receive the $300 federal benefit if he or she first qualifies for $100 in aid from their state. Evermore said this will cut out a large group of people. “There are so many problems with people getting a benefit under this,” she said.

The executive action signed by Trump does not reinstate the previous moratorium on evictions, which lapsed in July. The original ban covered mortgages which were backed by federal funds. The nonprofit Urban Institute has estimated that moratorium covered just over 12 million households.

Just something to consider. The new measure only states that “the Secretary of Health and Human Services and the Director of the CDC shall consider whether any measures temporarily halting residential evictions of any tenants for failure to pay rent are reasonably necessary to “prevent the further spread of COVID-19.”

No money is set aside to help homeowners or renters. The action calls for the Housing and Urban Development and Treasury secretaries to identify “any and all Federal funds to provide temporary financial assistance to renters and homeowners” who are “struggling” to pay their mortgages and rents because of the coronavirus.

Experts told CNN that it was unclear based on the process laid out for government agencies how long it would take for anyone to see funding from this.

A deferral, not a cut. The payroll tax measure that Trump signed Saturday does not actually reduce the payroll taxes. It defers the due date for the portion of those taxes paid by employees — 6.2% for Social Security and 1.45% for Medicare — through December 31. It applies to workers whose wages are less than $4,000 on a biweekly basis, or about $104,000 a year.

This is similar to Treasury’s deferring the federal income tax due date this year to July 15, from April 15.

The payroll taxes would still be due. They would just have been delayed to the end of the deferment period. Companies may not want to stop withholding the employees’ share of the taxes from their paychecks for that reason.

Trump also said that if he’s reelected, he would seek to forgive the levy and make permanent cuts to the payroll taxes. But the power to change tax law lies with Congress, not the White House.

An idea rejected by Congress. Despite Trump’s claims that it’s popular, making changes to payroll taxes has not won many fans on either side of the political aisle in part because it wouldn’t help the unemployed. Also, any cuts to the levies could hurt the finances of Social Security and Medicare, which are already under fiscal pressure.

When lawmakers temporarily reduced the payroll taxes in 2011, they reimbursed Social Security’s trust fund out of general revenue.

Trump’s directive regarding student loans seems to be the one executive action of the four that will deliver the results as the administration said. This is the only area of the four which doesn’t need funding from Congress, state governments or the private sector to fully implement.

An additional three months. The memorandum directs the Education Department to extend the student loan relief granted in the CARES Act until the end of the year.

Currently, loan payments are paused and interest is suspended on federally-held student loans until September 30.

Democrats have pushed for extending the relief for another year and making private student loans eligible.

In March, Trump waived student loan interest by executive order and the administration said borrowers could request a deferment on their payments. Congress later codified that policy into law and took it a step further by automatically suspending monthly payments.

Don't Miss it Coronavirus update: US records 5 million COVID-19 cases as almost 20 million infected worldwide
Up Next Coronavirus: UK daily cases tops 1,000 for first time in over a month

Hours before the onset of the Yom Kippur fast day, religious leaders and the Health Ministry are calling on their…

Three more counties in Wales are to be put into local lockdown following a rise in coronavirus cases. Neath Port…

Travellers from Dubai and the UK were primary sources of Covid-19 importations into India, according to an analytical study done…

“On Rosh Hashanah it is inscribed, and on Yom Kippur it is sealed.”These are the words that millions of Jews…

Image copyright Getty Images President Donald Trump’s response to the coronavirus pandemic, in which more than 200,000 people in the…