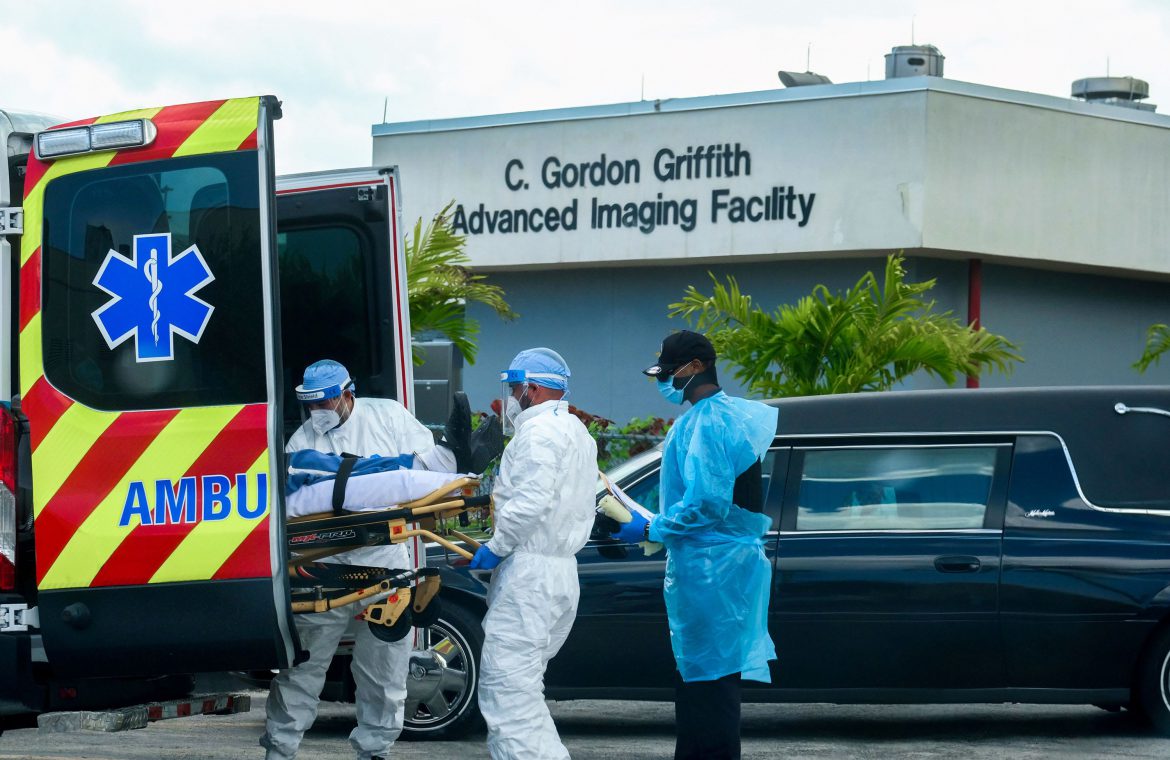 Emergency Medical Technicians (EMT) arrive with a patient while a funeral car begins to depart at North Shore Medical Center where the coronavirus disease (COVID-19) patients are treated, in Miami, Florida, July 14, 2020.

Florida reported 276 new deaths caused by the coronavirus on Tuesday, marking the highest number of deaths reported in a single day by the state since the pandemic began.

That brings the total number of Covid-19 deaths in Florida to 8,553, according to the state’s department of health. Florida also reported 5,886 new cases of the virus, bringing the cumulative total to 542,792 confirmed cases across the state since the outbreak began.

The Florida Department of Health didn’t immediately provide a comment for this article.

The state previously reported a single-day high of 257 Covid-19 deaths on July 31, according to data compiled by Johns Hopkins University. The seven-day average of new Covid-19 deaths in Florida hit a high of 185 average deaths per day on Aug. 5, according to a CNBC analysis of Hopkins data.

The percentage of tests that came back positive on Monday also increased to 10.3%, up from about 8.6% on Sunday. That statistic is a closely watched data point that could indicate whether the outbreak is expanding and whether the state is conducting enough testing.

Florida is one of the hardest-hit states in the country by the coronavirus, but daily new cases have appeared to decline in recent days. Epidemiologists, however, warn that it’s too soon to establish any kind of strong trend and say that testing has fallen even faster.

The seven-day average of daily new cases has dropped by 38% compared with two weeks ago, according to CNBC’s analysis of data compiled by Hopkins, but testing has declined as well. The state was running roughly 54,000 tests per day two weeks ago, but that has dropped by about 46% to just over 37,000 as of Aug. 10, based on data compiled by the Covid Tracking Project, a volunteer project founded by journalists at The Atlantic magazine.

“I’m always cautious. It does seem like we’re on a downward trend maybe,” Cindy Prins, an epidemiologist at the University of Florida, told CNBC on Tuesday, saying the state’s positivity rate, or percent of positive Covid-19 tests, has fallen from its recent peak at 12.3%, according to the state’s health department. She added that the state ought to conduct more testing to better understand the outbreak.

“You want to hit that point where you’ve got enough testing going on that you’re really identifying the majority of the people who are positive, because that allows for the disease control effort,” she said. “Then you’ll see not only the percent positivity get lower, but your cases as well will start to decrease, and I think that’s the spot we want to be in.”

She added that Hurricane Isaias, which hit Florida and other states on the East Coast earlier this month, may have disrupted some of the state’s Covid-19 response efforts. For example, she said, testing declined due to the storm, which may have made it seem as though cases were decreasing as well.

Deaths — which lag behind daily new cases as people get infected, become sick and eventually die — are seen as a more stable indicator of an outbreak, because they are less dependent on available testing capacity.

Since the virus broke out in the US more than six months ago, cases have climbed to more than 6.7…

The number of Canadians who have tested positive for the novel coronavirus grew by 865 on Saturday, while the…

Good morning. Today was meant to be the first full day of the Labour party conference in Liverpool. Now it…