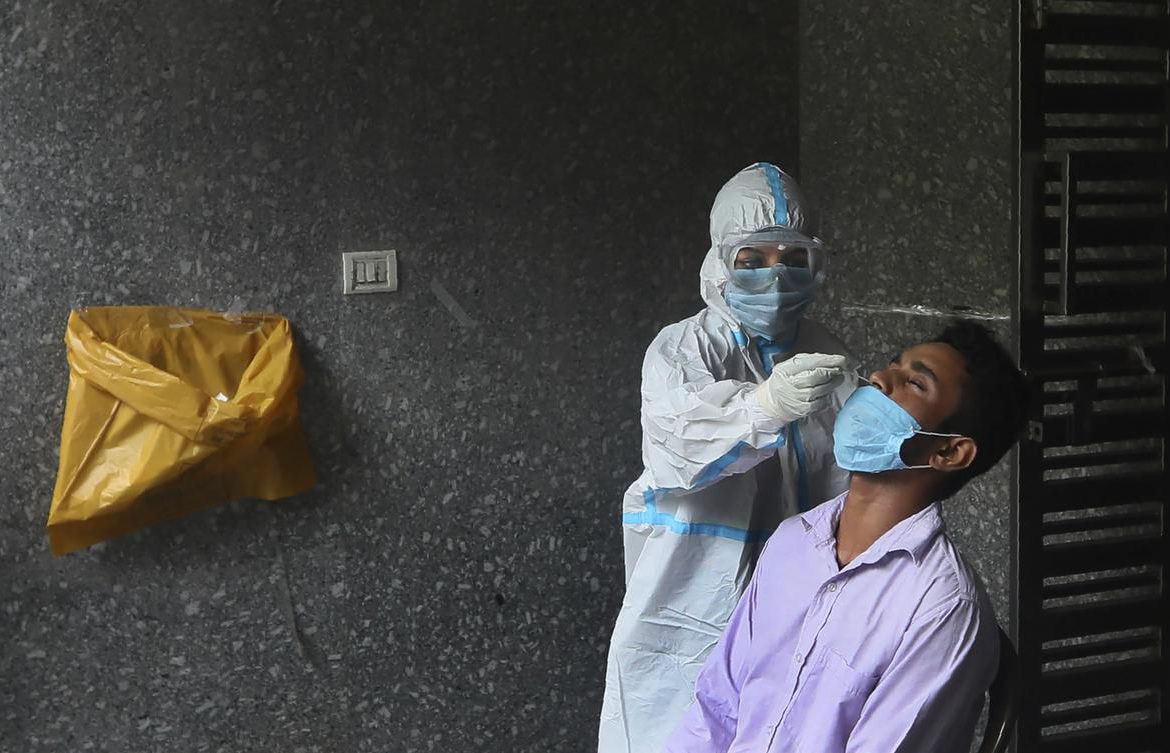 8 a.m. Nearly 30 per cent of residents in India’s capital New Delhi have had the coronavirus, according to a seroprevalence study of more than 15,000 people conducted by the state health authorities.

The prevalence of COVID-19 antibodies has increased to 29.1 per cent in the first week of August from the 23.48 per cent found in the first survey held between June 27 and July 10.

About 32.2 per cent of women in the capital showed seroprevalence compared to 28.3 per cent per cent among men. The tests help identify the presence of antibodies in the general population.

With a population of about 16 million, New Delhi has so far reported 156,139 confirmed virus cases and 4,235 deaths.The epidemic in India is now one of the world’s fastest growing, with more than 2.8 million infections. It trails only the U.S. and Brazil in the total number of infections.

7:40 a.m. Estee Lauder Cos. plans to cut 1,500 to 2,000 jobs worldwide and boost its digital operations after coronavirus lockdowns hit demand for cosmetics.

With consumers shifting to more online purchases, the company said in an earnings release Thursday that it plans to close 10 per cent to 15 per cent of its free-standing stores. Estee Lauder said it expects to take restructuring and other charges of between $400 million and $500 million.

The company’s forecast for adjusted first-quarter earnings of 80 cents to 85 cents a share fell well short of analysts’ estimate of $1.22 a share. Estee Lauder said net sales in the current period will fall by 12 per cent to 13 per cent.

7:31 a.m. Two players on the South Africa cricket squad have tested positive for COVID-19, the national association said Thursday. The names of the players were not released.

The positive tests came at a team culture camp that involved more than 30 of the country’s top players. Former captain Faf du Plessis is not at the camp because of the birth of his second child.

Cricket South Africa said it performed 50 tests on players and staff at the camp at the Kruger National Park wildlife reserve in the north of the country. The two players were asymptomatic, it said, have been isolated and will be monitored by the CSA medical team.

The five-day camp started on Tuesday.

6:36 a.m.: Making sure there’s hand sanitizer throughout the office is one thing, but are workplaces also prepared to support their staff psychologically when they return?

It’s a question that’s receiving more attention as some workplaces look to gradually migrate workers back to the office this fall — and it’s one that the Canadian Mental Health Association’s Ontario division hopes to address with a new mental health tool kit for employees and employers.

The CMHA’s Ontario division is among the workplaces looking to begin welcoming colleagues back in September, and once it had addressed some of the physical aspects of returning to the office, CEO Camille Quenneville said the next question was: What is it really like for people coming back to work?

“My colleagues here, to their great credit, said we could do a real public service if we help everybody on this front, because people are only thinking about the nuts and bolts about how to go back to work, and not what it will take psychologically for people to go back,” she said.

Read the Star Exclusive story from the Star’s Jacques Gallant

6:30 a.m.: The Alberta Teachers’ Association is calling on the Kenney government to delay the start of the school year until after Sept. 7, Labour Day.

Association president Jason Schilling made the announcement Wednesday after meeting with Education Minister Adriana LaGrange to discuss concerns about the province’s back-to-school plan.

The government has said students are to return to class as early as Sept. 1.

6:30 a.m.: Health officials in Australia’s hot spot state said the daily new COVID-19 tally would have to be substantially lower before authorities would consider easing the lockdown in the city Melbourne.

“I won’t give you a figure, but single digits or even low double digits,” Victoria state Deputy Chief Health Officer Allen Cheng said, though he was encouraged by a downward trend. Victoria Premier Daniel Andrews said if the city was reopened even at half the current figures, “you wouldn’t have defeated the second wave. You’d just be beginning the process of a third wave.”

Victoria reported 240 new cases and 13 deaths Thursday, an increase from the previous day but continuing a recent decline. Melbourne has been under Australia’s toughest pandemic lockdown restrictions for two weeks.

6:28 a.m.: India counted another record high of new coronavirus infections Thursday as it ramped up testing to more than 900,000 a day.

The 69,652 new cases pushed India’s total past 2.8 million, of which 2 million have recovered, the Health Ministry said.

The country also recorded 977 coronavirus fatalities in the past 24 hours, raising total deaths to 53,866, the ministry said.

COVID-19 illnesses and deaths are thought to be far higher around the world due to limited testing and other factors.

India has conducted 3 million tests for the virus, but experts have urged increasing its testing capacity greatly, given India has the world’s second-highest population of 1.4 billion people.

It has the third-most cases in the world, behind the United States and Brazil, and has the fourth highest number of deaths behind the U.S., Brazil and Mexico.

India’s nationwide lockdown imposed in late March began easing in May and is now largely being enforced in high-risk areas.

Four of India’s 28 states now account for 63 per cent of total fatalities and 54.6 per cent of the caseload. Western Maharashtra state and three southern states of Tamil Nadu, Andhra Pradesh and Karnataka are the worst-hit regions.

Thursday 6:25 a.m.: South Korea has reported 288 new confirmed cases of the coronavirus — its third straight day of over 200 as health authorities scramble to slow an outbreak in the region around the capital.

The figures announced Thursday by the Korea Centers for Disease Control and Prevention brought the national caseload to 16,346, including 307 deaths.

The agency says 230 of the new cases are in the densely populated Seoul metropolitan region, home to half of the country’s 51 million people.

Health workers there have struggled to track transmissions tied to various places and groups, including churches, restaurants, schools and workers. Officials have banned large gatherings and shut down nightspots and churches in the capital area amid fears that the outbreak could spread nationwide.

Wednesday 5 p.m.: As of 5 p.m. Wednesday, Ontario’s regional health units are reporting a total of 43,025 confirmed or probable cases of COVID-19, including 2,828 deaths, up another 84 cases and no deaths in 24 hours, according to the Star’s latest count.

The three cities have each reported the highest case totals in the province so far the month.

Meanwhile, the worst-hit region of the province accounting for population continues to be in southwestern Ontario. On average, the four health units that have seen the highest rate of cases per 100,000 people over the last seven days — Huron Perth, the Southwestern health unit, Chatham-Kent and Windsor-Essex — are all in the southwest, which has seen several notable outbreaks in large agricultural workplaces.

The long term average for daily case reports has been consistently below triple-digits since the province saw a brief spike late last month, and the province remains near the lowest rate of new infections since before the pandemic first peaked in Ontario in the spring.

That rate rose Wednesday to an average of 92 cases per day over the last week. At the pandemic’s worst, Ontario saw the same average reach a mid-April peak of nearly 600 daily.

Ontario has averaged less than a single reported death per day over the last seven days.

The vast majority of the province’s COVID-19 patients have since recovered; the province lists fewer than 1,000 active cases of the disease.

The province cautions its separate data, published daily at 10:30 a.m., may be incomplete or out of date due to delays in the reporting system, saying that in the event of a discrepancy, “data reported by (the health units) should be considered the most up to date.”