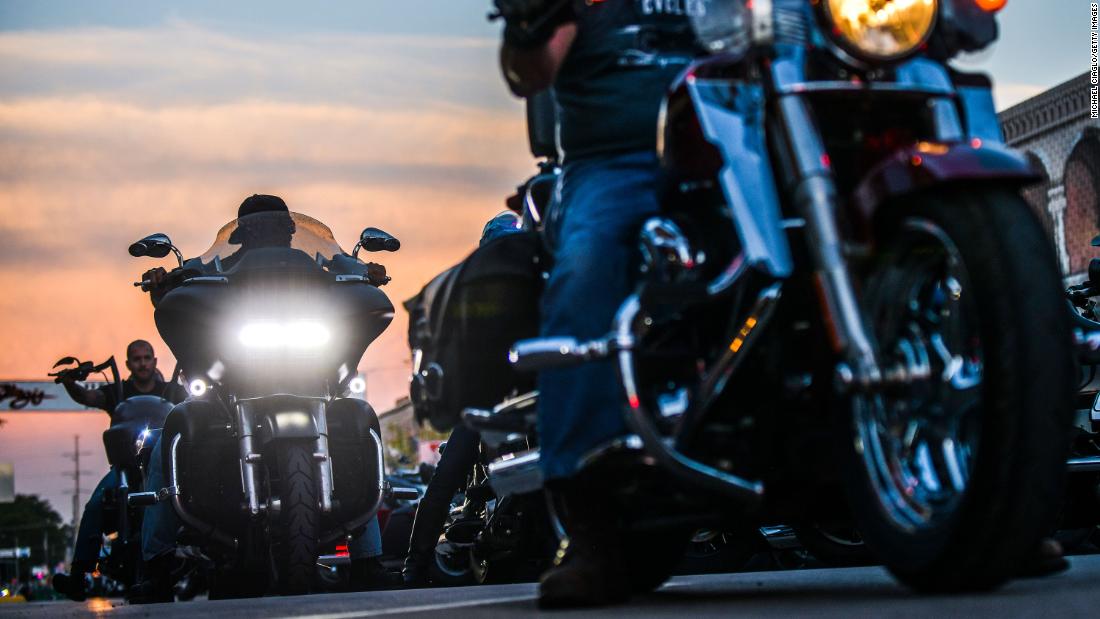 At least seven Covid-19 cases in Nebraska’s Panhandle region have been tied to the rally, Kim Engel, director of the Panhandle Public Health District, confirmed in an email to CNN.

South Dakota state health officials announced Thursday that a person who worked at a tattoo shop in Sturgis had tested positive for the virus, and could have possibly exposed people during the event last week.

The person was an employee of Asylum Tattoo Sturgis, and could have spread the virus to others on August 13-17 from 10 a.m. to 2 a.m., officials said.

Earlier this week, officials said a person who spent hours at a bar during the rally had also tested positive. That individual visited One-Eyed Jack’s Saloon in Sturgis on August 11 from noon to 5:30 p.m. while able to transmit the virus to others, health officials said.

Anyone who visited either the tattoo shop or the saloon, which are located at the same address, during that period should monitor for symptoms for 14 days after the visit.

Health experts were concerned that this year’s Sturgis motorcycle rally could be a “super spreader” event. The 10-day mass gathering typically draws crowds of more than 500,000 people from all over the country, including coronavirus hotspots.

South Dakota Department of Transportation officials tracked more than 462,000 vehicles entering Sturgis during the rally. Though the total was a 7.5% decline from the previous year, it is still one of the largest mass gatherings since the start of the pandemic.

Many of the attendees did not comply with health guidelines such as wearing masks and keeping distance from others, as seen at a concert for the rock band Smash Mouth.

A little more than 60% of people in Sturgis voted against holding the motorcyle event. But city officials said they felt they wouldn’t have been able to stop the crowds from coming in and instead opted to prepare for the event as best they could.

“There are people throughout America who have been locked up for months and months,” Daniel Ainslie, the city manager, told CNN last week. “So we kept hearing from people saying it doesn’t matter, they are coming to Sturgis. So with that, ultimately the council decided that it was really vital for the community to be prepared for the additional people that we’re going to end up having.”

South Dakota reported 193 new cases on Friday. It’s one of several US states that have seen an increase in new cases this past week compared to the week prior, according to data from Johns Hopkins University.

CNN’s Eric Levenson and Christina Maxouris contributed to this report.

Don't Miss it Coronavirus R0: What is the R number and why does it matter? – BBC News
Up Next Russia vaccine roll-out plan prompts coronavirus mutation worries