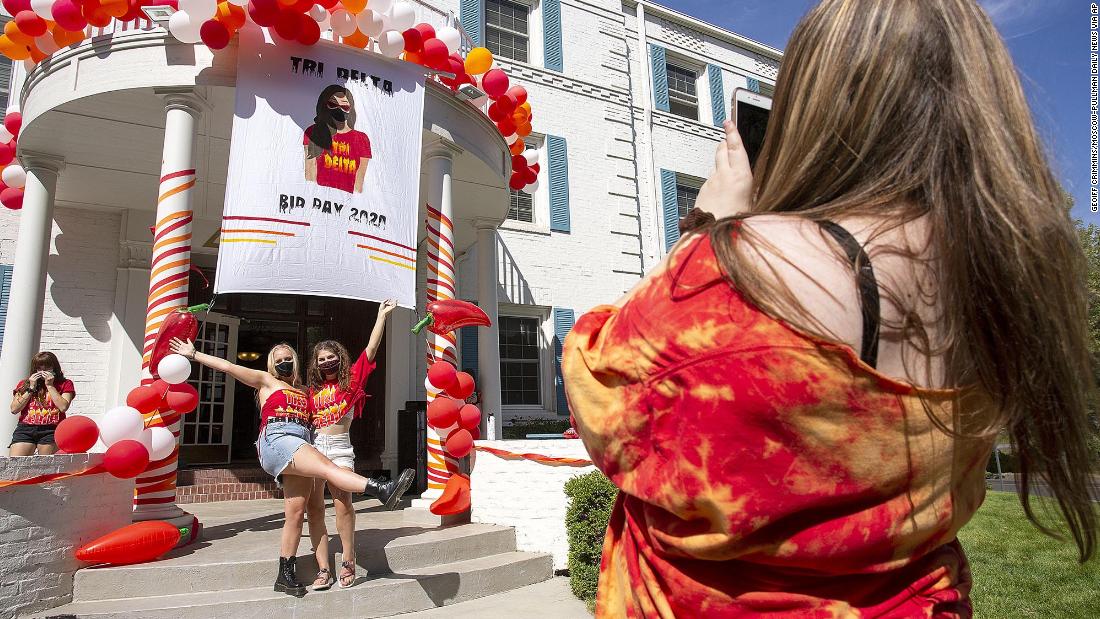 Kansas Gov. Laura Kelly said Monday the state had reached an “unfortunate milestone” by reporting at least one case of the virus in every county. The state’s infection rate, she said, “continues an alarming trend in the wrong direction.”

To make matters worse, Kelly said, as college students return to campus, several clusters have been reported at universities. Last week, the University of Kansas reported more than 80 cases of the virus.

In Kentucky, Gov. Andy Beshear warned cases could spike again as the state reported more deaths last week than “in any other week battling the virus.”

Beshear said the state is seeing “troubling signs” and is at “the same moment that Kentucky was at in the beginning of the summer.”

“More people are trying to get out of the quarantine than the health department has recommended,” the governor said.

The governors’ messages come as, for the country as a whole, case and death rates are dropping, offering hope that the summer surge may be waning. But, alarmed by grim forecasts for what the fall and winter could look like in the US, health experts say now isn’t the time to ease prevention measures. US Centers for Disease Control and Prevention Director Dr. Robert Redfield expressed concern last week about the heart of the country getting “stuck,” while other parts of the US, including across the South, were reporting improvements.

The US has recorded more than 5.7 million infections and at least 178,065 deaths, according to Johns Hopkins University.

New daily cases over a week averaged about 43,000 as of Monday, down from a peak average of 67,317 on July 22, according to Johns Hopkins University data.

The country’s Covid-19 death rate also has dipped. The daily average across a week hovered above 1,000 for 25 straight days from late July into mid-August — but it’s been below 1,000 since Friday.

Throughout the summer, US leaders and health officials have cautioned against large social gatherings saying it was those types of events that helped fuel a surge in positive cases. Earlier this month, a Georgia study showed super spreading events have been especially important in driving the pandemic in rural areas.

But the warnings haven’t brought gatherings to a halt.

In South Dakota earlier this month, thousands from all over the US gathered for the Sturgis Motorcycle Rally, a massive annual event that usually brings in about 500,000 tourists. Experts said the event had the potential to become a super-spreader event. Now dozens of cases across several states are being linked back to the rally.

In Minnesota, at least 27 cases were linked to the rally, two of which were people who worked or volunteered at the event, according to Kris Ehresmann, the infectious disease division director at the state’s health department.

At least seven cases in Nebraska’s Panhandle region have been tied to the rally, and so were at least two cases reported by South Dakota officials. One positive result was a person who worked at a tattoo parlor in Sturgis, while the other was an individual who spent hours at a bar during the rally.

Last week, Maine CDC officials issued a citation to a venue that exceeded the indoor gathering limit of 50 individuals when it hosted a wedding reception earlier this month that has since been linked to a Covid-19 outbreak.

More than two dozen confirmed cases were associated with the wedding and reception. One of the individuals that tested positive following the wedding reception has died, Robert Peterson, the CEO of Millinocket Regional Hospital, said in a statement.

The US Food and Drug Administration’s commissioner acknowledged Monday that he mischaracterized data about the potential benefits of convalescent plasma in treating Covid-19.

The FDA on Sunday said it issued an emergency use authorization for convalescent plasma, which is made using the blood of people who have recovered from coronavirus infections.

While explaining that decision, Commissioner Dr. Stephen Hahn said Sunday that data from a Mayo Clinic study showed use of plasma reduced the risk of death by 35%, and said that meant if 100 people got coronavirus, 35 would survive because of the treatment.

That’s not what the study showed. This study, released August 12 in a preprint, meaning it had not yet been peer-reviewed, showed that those treated with plasma containing the highest levels of antibodies had a 35% lower risk of dying within a week compared to those treated with less-rich plasma.

The study did not show the use of plasma reduced the overall death rate by 35%. Hahn admitted Monday he had been inaccurate.

“I have been criticized for remarks I made Sunday night about the benefits of convalescent plasma. The criticism is entirely justified. What I should have said better is that the data show a relative risk reduction not an absolute risk reduction,” he tweeted Monday.He also has defended the emergency use authorization for convalescent plasma as data-driven, after several top health officials expressed skepticism there was enough data to justify it.

Iowa’s health department confirmed the state’s first death of a child from Covid-19 complications in a news release this week. The child was under the age of 5 and died in June, according to the release. The child also had “significant underlying health conditions,” health officials said.

The children’s deaths come as many schools across the country have welcomed students back to class, while others have opted to begin the year remotely.

The guidelines say in general, children are less likely to have severe symptoms than adults. The risk of teachers, school administrators and other staff will, however, “mirror that of other adults in the community” if they get sick, the guidelines said.

Some colleges have also opted to go online while others, who welcomed students back to campus, have — in some cases — reported hundreds of Covid-19 infections.