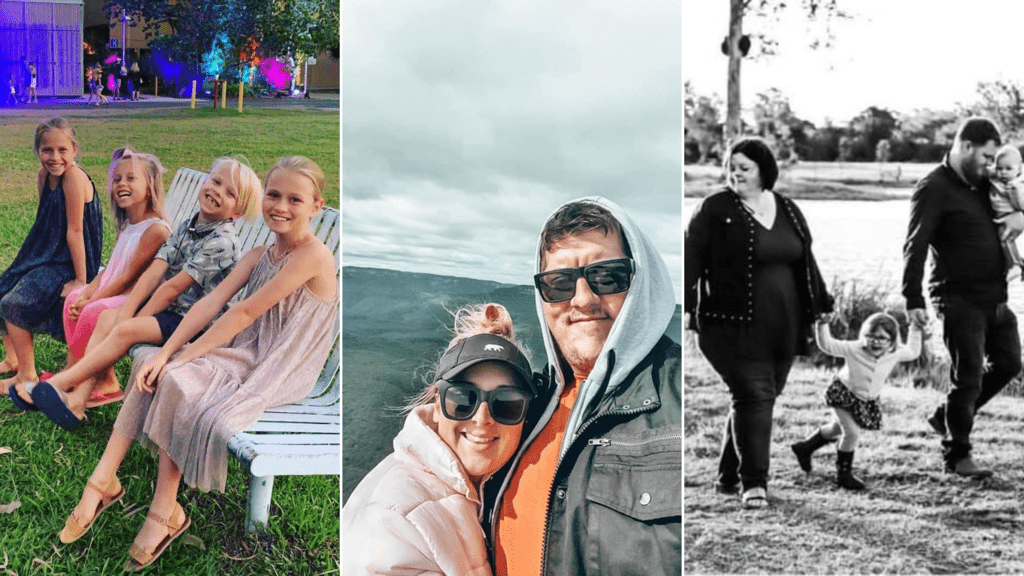 When the families of FIFO workers entered 2020, they never could have predicted the uncertain road that lay ahead.

In the months that came next, the coronavirus pandemic hit Australia – irrevocably changing the course of people’s lives and livelihoods.

Western Australia slammed its border shut in March to curb the spread of the virus in the state.

Now, in September, there are no signs of the border coming down.

What this means for people who live interstate and work on WA mine sites is complex.

Those workers have had to make the hard sacrifice of staying away for long periods of time in order to keep their jobs.

Often they have partners and sometimes children that they are unable to see for weeks on end.

And what’s harder is that there is no known conclusion to it all.

As Father’s Day fast approaches, and Christmas slowly creeps up, these families are wondering – when will it end?

This the story of these workers and their families from the eyes of those who love them most.

Kelly McEwan’s husband left Queensland on March 25, and he was gone 17 weeks before she saw him again.

From July 22, she had three weeks with him before he had to leave for work and to quarantine in WA.

She explained to 7NEWS.com.au that he will now be in WA until at least just before Christmas.

“Unfortunately no we have no idea what is happening with exemptions or when they may be perhaps broadened,” she said.

“The time frame of Christmas is our choice as a family and, at this point, he will have to quarantine again in Perth upon returning.”

Kelly and her partner. Credit: Supplied

Before Christmas, there will be Father’s Day, which Kelly said will be sad for her family.

“I really feel for my husband as it will be his first since our youngest little girl was born and because of all of this he won’t get to be here and spend it with his girls,” she said.

“Father’s Day will be spent with their grandfathers.

“We are hoping my husband will be home for a few weeks over Christmas as we will need time together as another 18 weeks will have passed by this stage.”

Kelly spoke candidly about the impact the pandemic was having on their mental health, saying that juggling three kids under four alone has been tough.

“This ongoing situation has impacted greatly on our mental health,” the mum said.

“Having three young children under the age of four makes it very difficult to cope, even with family support, it’s still not the same as having their father/your husband home.”

Kelly said that, ideally, they’d like FIFO workers to be granted exemptions, ones that will still put safety in mind but be less restrictive.

“We completely respect that there is a pandemic,” she said.

“However, they could be tested upon arrival and do a few days quarantine while they wait for results and providing a negative result.

Kelly and her family. Credit: Supplied

“There’s a way of mitigating the risk without being completely restrictive on every single person from every single state that enters.”

Asked about their plans for the future, she said they wanted to come out the other side stronger as a family.

“Our plans are to hopefully get through this horrible pandemic and come out the other side stronger and with a greater appreciation of all we have together as a family,” she said.

Jamee and her partner moved to New South Wales from WA in March.

He was only there five days before the restrictions around FIFO workers entering WA from NSW came in.

Next, he was on a plane back to WA, to make sure he could keep his job.

“We were told it would be three months with six months as a maximum,” Jamee said.

“It has now been six months and there has been no change to any of the rules allowing FIFO workers to travel home to their families.

“Luckily, my partner was able to come home for two weeks in July just before extra restrictions were implemented on FIFO workers from NSW (again).

“But as he took almost five weeks unpaid leave to have this time off, and with the new restrictions, there is now a 0 per cent chance of him being able to come home until the borders open.”

Borders in WA will open in Phase 6 – that’s all the information these families have.

As the state hasn’t entered Phase 5 yet, and with the tentative date being October, they’re not expecting borders to come down anytime this year.

She’s worried about Christmas, especially if her loved one isn’t able to come home.

“We aren’t sure what Christmas will look like,” she said.

Jamee explains how tough it has been, saying the border has a “total disregard for any FIFO families’ mental health by only giving us the option of relocating to WA”.

“The constant rollercoaster of hoping that maybe the premier will understand what we are going through, and provide some certainty it may end soon, is always crushed by news of pushing back dates,” she said.

Asked what she wants as a solution, Jamee replied “acknowledgement and understanding” about the struggles they face.

She added that she wants “most of all an exemption for our men and women to be able to come home”.

“There has to be a solution in between keeping them in WA indefinitely or relocating to WA,” Jamee said.

“We aren’t any closer to a resolution now than what we were six months ago, and they have had ample time to find a way for them to be able to get home.

Jamee said in an ideal world, she wants her partner back in NSW on a regular basis.

“At this point, we are both just existing, not living, and we want our lives back and we want to be back together in the same state and try and enjoy what little is left of 2020,” she said.

“It isn’t good for anyone to be away from their loved ones for this long with no end date.

“He has done FIFO work for over 10 years so he isn’t a stranger to being away from home – but he has always known when he is coming back.

“The no end date is the absolute worst thing and we are really hoping we aren’t going to have to do this again in 2021.”

When Mayona Marshall’s family found out about the border closure it was a hard decision to send her husband and the father of her children back to WA – he’d been on break at the time.

“We were told it was expected to be a minimum six-month stint but honestly we thought surely not, they are just being over cautious,” she told 7NEWS.com.au.

“Here we are, though, almost six months down the track, and we have not been able to have him home once.”

The couple has four young children, and endless conversations and FaceTime can’t make up for the lack of human contact that this family is missing.

“He has missed so many milestones, children grow up so fast,” she said.

‘He has missed so many milestones, children grow up so fast.’

“With no end in sight, and the children just wanting to hug their Daddy, emotions have become very strained, simple little things have brought them to tears.

“The hardest part for me as a wife and mother has not been dealing with my own heartbreak and isolation, but holding the little hearts of my four children and trying to keep upbeat for them.”

Mayona says the sad part of this situation is other people’s opinions, explaining eloquently the difference in the pandemic for FIFOs.

“I’m constantly hearing ‘Well you chose to work FIFO so you should be used to it’,” she said.

“We did sign up for FIFO and have been doing it for many years – but we signed up for two weeks away.

“We do miss special occasions with FIFO, but the thing is we either celebrate that occasion early or late but we still celebrate it.

The mum said it’s been a huge strain on their mental health.

“We are living two separate lives with no end in sight – it’s heartbreaking for all involved,” she said.

Like the others, she wants easier exemptions in place.

“There has to be some kind of exemption for FIFO workers,” she said.

“If they can make an exemption for a football team and the AFL Grand Final why not someone that is going to work to support their family and keep the economy afloat.”

“If COVID has taught us one thing it’s to not make plans. In a forever-changing environment it’s too stressful for all involved to plan ahead,” she said.

“We are just living day by day, hoping for some kind of change that will allow our family to be together again.”

The WA government continues to propose that FIFO workers relocate to WA – or the jobs go to West Australians.

It’s a hard stance that’s made Premier Mark McGowan popular across the western state, but it’s extremely hard for those who live interstate.

“We don’t believe flying in workers from over east is sustainable any longer, with or without COVID-19,” a state government spokesperson said.

“There are many West Australians that can perform the roles needed in the sector.

“What we’d like to see, far more than any potential FIFO quarantine arrangements, is a clear plan from industry to employ more Western Australians or move more people from the east to WA permanently.”

In their response, they also touted the opportunity for interstate FIFO employees who work in WA to relocate here.

“The current Quarantine (Closing the border) Directions have provisions for people who want to permanently relocate to WA,” the spokesperson said.

“A common-sense approach is taken for every application which is assessed on a case-by-case basis.

“But favourable consideration will be given to those who can prove they are already employed in WA and/or have specialist skills not available in the state and are permanently relocating to WA.”

Unfortunately for existing FIFO families – with kids in school, loved ones nearby and lives of their own – it’s not as easy as selling up shop and moving across the country.

In the meantime, Kelly, Jamee and Mayona are taking it one day at a time.

And they are never giving up hope for compassion.

Don't Miss it Coronavirus: White House targets US disease chief Dr Anthony Fauci – BBC News
Up Next Trump and Biden to give speeches as conflicts over coronavirus and protests intensify – live | US news