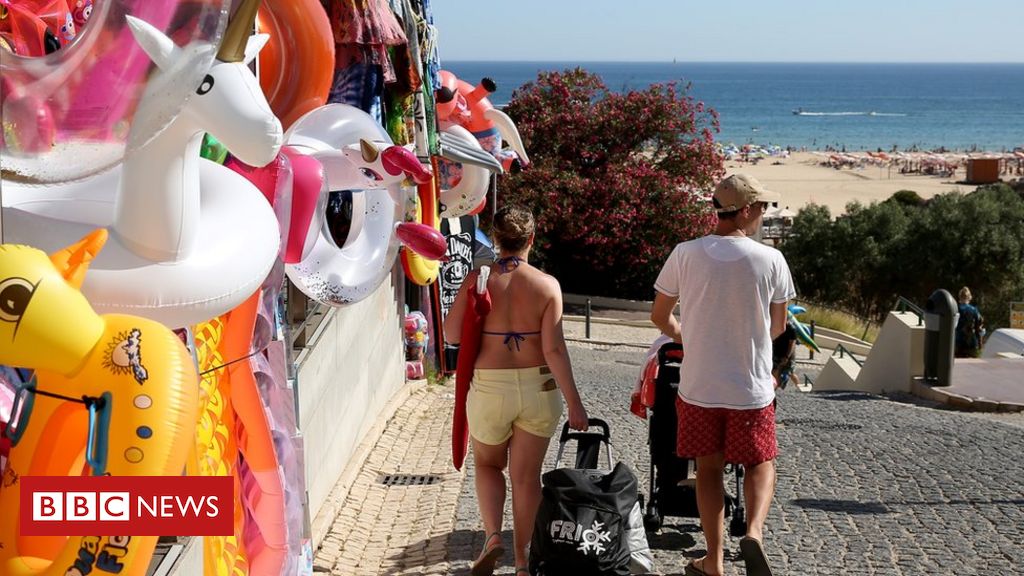 Portugal will not be added to the UK government’s quarantine list despite a rise in cases.

Britons in Portugal had said they were anxiously awaiting a decision by the UK government as ministers discussed the travel restrictions.

The decision covers England. Travellers to Wales from Portugal must quarantine.

Cases in Portugal have risen in the past week beyond the threshold at which ministers generally consider imposing 14-day mandatory self-isolation.

But unlike the UK government, Wales has decided to bring in quarantine rules for travellers from Portugal, Gibraltar, six Greek islands and French Polynesia.

The six islands are Crete, Mykonos, Zakynthos (or Zante), Lesvos, Paros and Antiparos. The rules in Wales come into force at 04:00 BST on Friday.

In recent weeks, several countries which had been exempt from the UK’s quarantine rules had the quarantine re-imposed – including France, Spain and Switzerland.

UK Transport Secretary Grant Shapps said on Thursday: “There are no English additions or removals today.

“We continue to keep the travel corridor list under constant review and won’t hesitate to remove countries if needed,” he added.

“Nonetheless, holidaymakers are reminded – 14-day quarantine countries can and do change at very short notice.”

Mr Shapps said the government takes several factors into account, including the prevalence of the virus as well as the level and rate of change, how many tests the country is doing, the extent of the contained outbreak and the government’s actions.

A seven-day rate of 20 is the threshold above which the UK government generally considers triggering quarantine conditions.

What are the latest quarantine changes?

England and Northern Ireland: No further additions – latest lists can be found here

Earlier, Britons in Portugal said they feared the quarantine rules may change while they were on holiday.

Laura McDonald, 26, who is with her fiancé Jake Robson, 27, in the Algarve, told BBC News it would cost them £450 to get home early – despite originally paying just £230 in total for their return flights.

“It’s just not feasible. What we would pay is half of what we lose in wages each,” she said.

Ms McDonald said the resort of Albufeira already seems quieter following speculation earlier this week about the possibility of having to quarantine on arrival back in the UK.

“We were on the beach yesterday and there were a lot of British people there talking about it and reading the news,” she said.

“Whilst we are having a great time it is at the back of our mind and we are anxiously awaiting the next announcement,” she added.

Meanwhile Joanne Dayer, 55, from Worcester, said the prospect of having to quarantine felt like “a major inconvenience and a frustration that seems unnecessary”.

The NHS physiotherapist is currently in Faro with her husband and daughter. She said she has already had the virus, adding that she is “not so much concerned about the virus as the need to quarantine”.

“My husband is retired, and my daughter is going to university in October, but I will have to cancel all my patients,” she said.

Some holidaymakers have told the BBC they have paid as much as £1,000 for flights amid a scramble to get home from Portugal this week.

Every year, more than two million Britons visit Portugal, making up the largest number of overseas tourists to the country.

Most head to the Algarve in the south, drawn by sunny Atlantic beaches, picturesque fishing villages and golf courses.

During May and June, the Portuguese government reopened its restaurants, coffee shops, museums and beaches. Hotels have mainly reopened, but nightclubs remain closed.

Holiday giant Tui temporarily ended package tours to the Zakynthos resort of Laganas following a number of cases linked to the town.

Greece has insisted it is doing “everything in our power” to keep UK holidaymakers safe.

ARE VIRUSES ALIVE?: Everything you wanted to know about viruses

ANXIETY IN 2020: “The pandemic has been my worst nightmare”

Are you currently on holiday in Portugal? Have you made plans to travel there? Share your thoughts by emailing haveyoursay@bbc.co.uk.

Don't Miss it What flattening the curve means, and will going hard against COVID-19 work in Australia | ABC News
Up Next The experts’ roadmap to beat COVID-19 in Australia