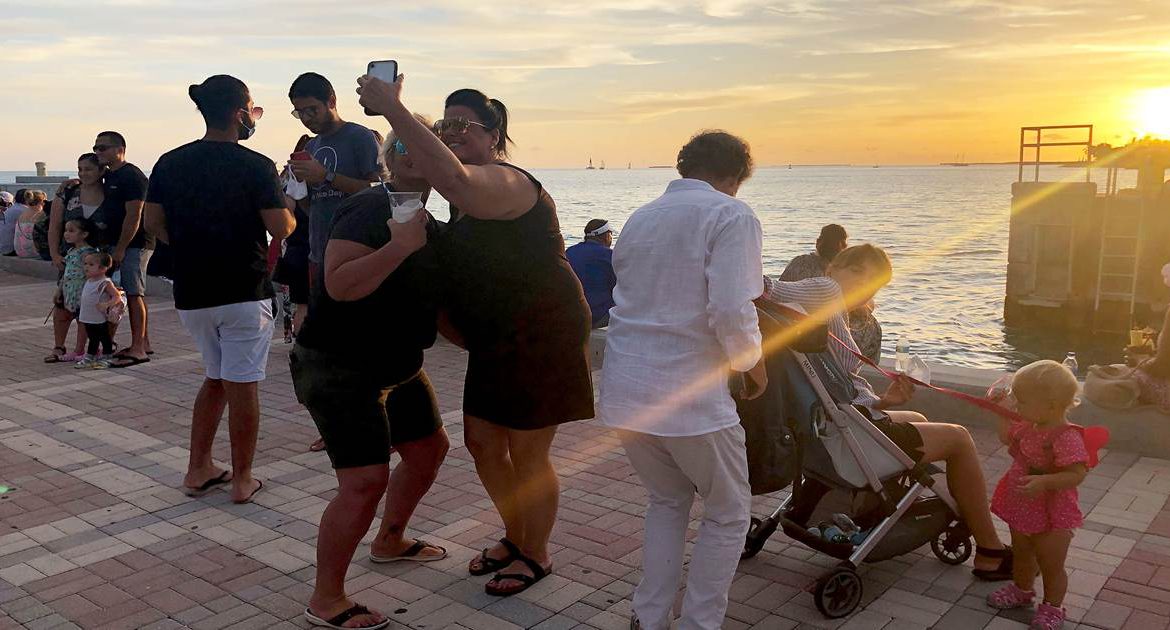 Millions of Americans, tired of being pinned down by the pandemic, are expected to hit the road this Labor Day weekend despite a coronavirus crisis that continues to generate more than 30,000 new cases per day and shows little sign of slowing down.

And the destination of choice, according to the travel site TripIt, is a state where the coronavirus crisis continues unabated — Florida.

“Florida this year is claiming the lion’s share (plurality) of Labor Day flight reservations, with 12 percent of all plans including a destination in the Sunshine State,” the site says.

As of Friday, Florida has reported 633,442 confirmed cases of COVID-19 and 11,647 deaths — two dismal figures that place it third in the nation for number of cases and fifth in the nation for fatalities, statistics compiled by NBC News show.

Another favorite destination for travelers this weekend? Hawaii, a state that is currently experiencing a surge in new cases.

Out-of-state travelers will be required to present, upon arrival, proof of a negative COVID-19 test within 72 hours of departure to avoid having to spend 14 days in quarantine.

But that requirement has not apparently deterred travelers, TripIt reported. United Airlines increased its service to Hawaii after a 50 percent increase in Labor Day weekend bookings.

The fact that so many Americans are ready to travel after months of staying put is worrying for public health experts.

Dr. Anthony Fauci, the nation’s leading infectious disease expert, said the new case count has been declining, but the country is still far from the goal of 10,000 or less new cases per day that he had hoped would be reached by September.

“When you have a holiday like Labor Day, we have seen, after Fourth of July, we saw after Memorial Day, a surge in cases,” Fauci said. “Wear a mask. Keep social distancing. Avoid crowds. You can avoid those kind of surges. You don’t want to be someone who’s propagating the outbreak. You want to be part of the solution, not part of the problem.”

In the two weeks before the Fourth of July holiday, there were 590,741 new confirmed COVID-19 cases, an NBC News analysis of available figures showed. In the two week after that holiday, the number of cases jumped 866,834.

But at that point the pandemic was easing in the Northeastern states that were hit hardest early on like New York and New Jersey and starting to take off in Southern and Sun Belt states like Florida, Arizona and Texas. All are led by Republican governors who, at the urging of President Donald Trump, were already in the process of reopening their states.

California, which has a Democratic governor who ignored Trump and took aggressive action early on to deal with the crisis, also saw a big spike when it reopened and now leads the nation with 722,042 cases. In recent weeks, however, the number of new cases and hospitalizations have been in decline.

Masks and social distancing rules remain in effect in both the malls and casinos. And Cuomo is dispatching state inspectors to the casinos to make sure people there aren’t gambling with other peoples’ lives.

Trump was expected later Thursday to release a Labor Day message in which he urges all Americans to wear masks against COVID-19, an issue he helped politicize by refusing at first to wear one himself.

On Trump’s watch, the deadly pandemic has claimed nearly 187,000 lives in the U.S., with more than 6.1 million cases recorded — both world-leading figures, the latest NBC News numbers show.

The U.S. now accounts for almost a quarter of the more than 26 million cases and about a fifth of the nearly 865,000 deaths worldwide, according to the Johns Hopkins University COVID-19 dashboard.

Meanwhile, baseball fans mourned the death of Hall of Fame pitcher Tom Seaver, who helped lead the so-called “Miracle Mets” to the New York team’s first world championship in 1969, and who was battling dementia when he died Wednesday of COVID-19. He was 75.

And in London, England, the production of the latest Batman movie, titled “The Batman,” ground to a halt after a crew member came down with the coronavirus. Actor Robert Pattinson stars in the movie.

First-time jobless claims for the last week of August fell to 881,000, which is the lowest weekly total since the pandemic took off and wrecked the thriving economy that Trump inherited from President Barack Obama. But part of the reason for the dip below the previous two weeks’ million-plus jobless claims numbers is that the government changed the way it adjusts for seasonal fluctuations in the jobs market. And while Trump has “boasted on Twitter of soaring job gains within the past three months, economists say this ignores the inescapable fact that the economy is still nearly 13 million jobs shy of where the country was in February,” NBC News reported Thursday.

Iowa Sen. Joni Ernst, a Republican in the midst of an unexpectedly tough reelection battle, was caught echoing a discredited conspiracy theory that government statistics on coronavirus infections and deaths have been inflated while talking to a voter. When asked later about that conversation, Ernst at first said she was just repeating what she had heard. But as the trickle of questions turned into a torrent, Ernst began back-pedaling and later issued a statement which read, in part, “Over 180,000 Americans have died because of COVID-19” and “what matters is that Iowa gets the resources it needs.” Iowa is currently a coronavirus hot spot. The number of cases in Iowa has jumped in recent weeks and health experts suspect part of the reason is that bikers who attended last month’s massive rally in Sturgis, South Dakota brought more cases home with them. One biker from Minnesota who attended the event has died from COVID-19.

The University of South Carolina reported 1,026 confirmed coronavirus cases in the past week, prompting a lockdown of several fraternities and sororities along with a crackdown on students and student organizations that hosted big bashes in defiance of school rules. More colleges and universities around the country also reported big outbreaks. Indiana University moved to shut down all fraternity and sorority houses on its flagship campus in Bloomington after a spike in new cases. SUNY Oneonta in New York sent its students home for the rest of the semester after 389 students on campus test positive. Temple University in Philadelphia did the same after 237 students and a school employee caught the virus. The University of Tennessee currently has 308 active case and 1,442 students in quarantine. At the University of Missouri, which has 516 active cases, 330 students were facing disciplinary action for breaking the school’s Covid-prevention rules.The head of the Centers for Disease Control and Prevention told governors last week to prepare for the “large-scale” distribution of a potential coronavirus vaccine by Nov. 1, which happens to be two days before the presidential election. Asked about the timing, which could give Trump a boost, Fauci said the federal Food and Drug Administration is calling the shots, not the White House. “The FDA has been very explicit that they are going to make a decision based on the data as it comes in,” Fauci told CNN. Also, the Nov. 1 date is just a target. “I mean if you look at the projection of the enrollment and the kinds of things you’ll need to get a decision about whether the vaccine is safe and effective, most of us project that that’s going to be by November, December, by the end of this year,” Fauci said. “Could this be earlier? Sure.”