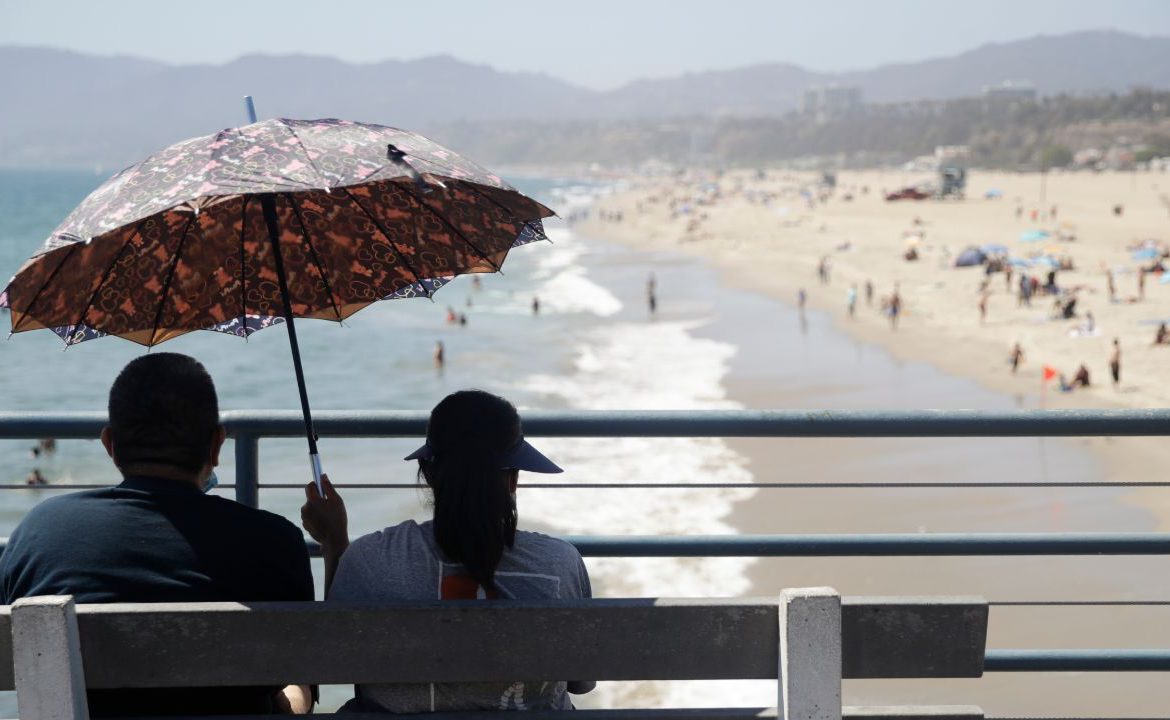 As the Labor Day weekend got under way, the U.S. reported more than 50,000 new coronavirus cases, the biggest rise since mid-August, as some governors warned about the potential for the virus to spread during large weekend gatherings.

New cases in the U.S. rose by 50,502 on Friday and the death toll neared 188,000, according to data compiled by Johns Hopkins University. The nation’s total number of confirmed cases surpassed 6.2 million. Despite the uptick in new cases on Friday, the figure remains lower than the record highs reached in July.

Visitors sit on a bench on the pier amid the coronavirus pandemic in Santa Monica, Calif. (AP Photo/Marcio Jose Sanchez, File)

63% OF NEW YORK RESTAURANTS COULD CLOSE OVER CORONAVIRUS LOSES: REPORT

The seven-day average of new daily cases across the U.S. was almost 40,319 for Sept. 3, according to a Wall Street Journal analysis of Johns Hopkins data. While the number is the country’s lowest one-week average since June 29, that average is much higher than in parts of May and June when it was in the low 20,000s.

The potential of a sustained large number of daily cases has raised concerns among some health officials.

“We should be dealing with this with a much greater sense of urgency than we are,” said Michael Mina, assistant professor of epidemiology at the Harvard T.H. Chan School of Public Health.

Governors in some states warned people to take precautions over the long weekend.

The race to find a vaccine to combat Covid-19 moved forward, with some major drugmakers continuing to test possible shots. Surgeon General Dr. Jerome Adams said states should be getting ready to start administering vaccines by November “just in case” in an interview on ABC News on Friday.

“It’s not just about having a vaccine that is safe and effective–it’s about being ready to distribute it,” Dr. Adams said.

Drugmakers, meantime, are planning to make a public pledge to seek government approval only after the shots they are testing are proven safe and effective, while hospitals, pharmacies and doctors’ offices scrambled to ensure they have the infrastructure to deliver the vaccines once they are ready.

Pfizer Inc., Johnson & Johnson and Moderna Inc. plan to issue the pledge on safety to bolster confidence in the vaccines, according to a draft of the statement reviewed by The Wall Street Journal.

India: India reported a record single-day surge in coronavirus cases, pushing the country’s total over the four million mark. The U.S. and Brazil are the only other countries to have surpassed four million infections, according to Johns Hopkins data. India reported 86,432 new cases and more than 1,000 fatalities, as the death toll neared 70,000, according to data from the country’s Health Ministry.

China: Starting Sept. 15, air travelers flying directly to China from the U.S. will be required to submit a negative coronavirus test within three days of travel, according to a notice issued by the Chinese Embassy.

South Korea: South Korea reported 168 new cases, the third day in a row that new infections have remained below 200. Health officials said Friday that they would extend social-distancing measures in the Seoul metropolitan area, where most of the recent infections have occurred, for another week.

Australia: Australia on Saturday reported 82 new coronavirus cases–the lowest tally since July 3–and 11 deaths as the country’s second wave of the pandemic continued to wane. The federal government on Friday outlined plans to relax state border restrictions by December. Most states have agreed in principle to move away from blanket border restrictions between regions.

Guam: The government of the U.S. territory of Guam, in the Western Pacific, said the island will remain in lockdown with only essential businesses allowed to open for at least another week, after reporting 59 new coronavirus cases. The number of hospitalizations continues to climb, raising concerns about medical infrastructure.