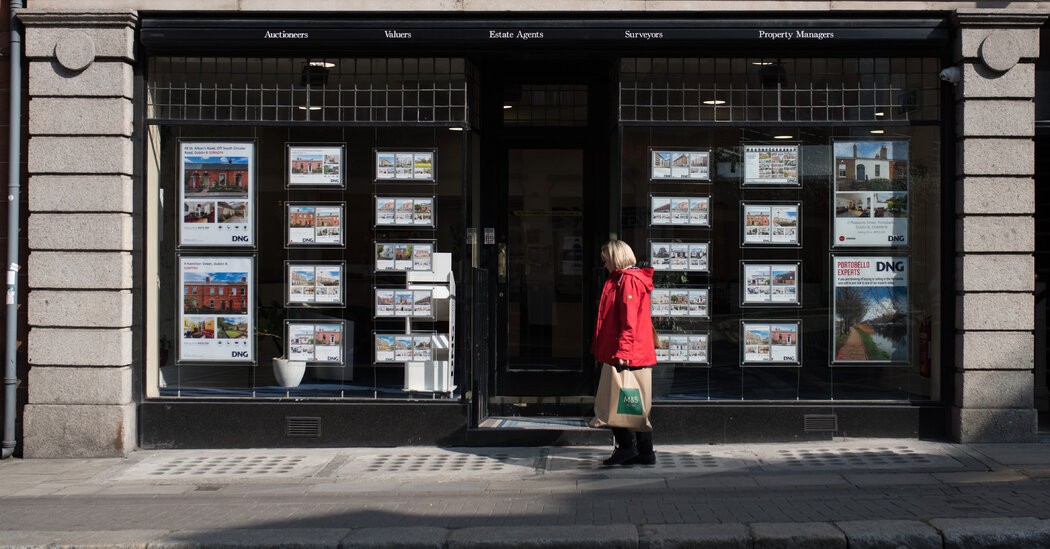 The modern one-bedroom Dublin apartment featured an open-plan living space, a sun-soaked balcony, solar panels, ample storage space and parking for two cars. The location was ideal, as was the price: about $1,800 a month — $300 less than the previous tenant had paid.

In a city where lines to view rental properties have regularly trailed around the block, the new tenants could hardly believe their luck.

“We were not going to get this place,” Aoife Brannigan, 25, said of the months of fruitless searching that she and her partner, Shaun Gribben, 25, had undertaken before landing the apartment. “I couldn’t see it happening had this not happened. We 100 percent benefited from this.”

The “this” she was referring to was the coronavirus, which has sent a chill through Ireland’s once-frenzied housing market, particularly Airbnb listings, which have been hit by a collapse in tourism. That drop, along with an exodus of people from overseas leaving Dublin because of the pandemic, has created a surge in available rental properties in the Irish capital — a shift that underscores how Airbnb’s presence continues to influence housing prices in popular cities.

For Dublin, the change has relieved a crunch that in recent years sent rents skyrocketing and left many people struggling to afford a place to live. The situation was so fraught that in February, voters in search of affordable housing and greater tenant rights set off shock waves in national elections by ousting the traditional governing parties.

When Ms. Brannigan and Mr. Gribben began their search in earnest at the start of the year, he said, “I remember every day I was given around 60 properties — and once this kicked in, it literally doubled.”

For years, homes rented out on Airbnb for short-term stays drained the supply of the Dublin area’s rental market, rising from about 1,700 full-home listings in 2016 to over 4,500 early this year just before the coronavirus crisis, according to Inside Airbnb, a site that tracks listings in cities around the globe.

But during the pandemic that trend has reversed, with such listings declining to about 3,900 during August, a deceptively small shift that has had an outsize effect. From May to July, long-term rental listings in the city were nearly 50 percent above the same period last year — an increase of over 1,000 rental homes — despite a 1.5 percent fall in the rest of the country, according to a report by Ronan Lyons, an assistant professor of economics at Trinity College Dublin, for the Irish real estate website Daft.ie.

Because they operate on short-term leases, Airbnb listings can flood the rental market in a way that longer-term rentals cannot.

“The Dublin market in normal conditions could easily take 3,000 properties without necessarily batting an eyelid,” Mr. Lyons said in an interview. Of the recent increase in listings, he said: “That’s quite a lot compared to what it has seen coming through. That’s about one and a half months’ additional supply that came on, and at a time when people aren’t moving to the city.”

The Irish government tried to cool the Airbnb market last year, introducing regulations to move short-term rentals in areas with rapidly rising rents back into the long-term market. But without an effective method of enforcement, the effort was largely fruitless.

Similar approaches have been taken — with mixed success — in Amsterdam and Paris, which have limited the number of days people can rent their apartments; in Barcelona, which in 2014 fined Airbnb over breaches of property rental rules; and in London, where investigations by The Times of London and Wired magazine found that thousands of the site’s listings appeared to violate the city’s limit on short-term rentals.

“Airbnb is knowingly allowing people to advertise properties that are not legally compliant on the platform,” said Eoin O Broin, the housing spokesman for Sinn Fein, a left-wing opposition party that made large gains in the February election on a platform that included proposals to freeze rents and build 100,000 homes. “And when those properties are let as they were before Covid-19 restrictions, and will be afterwards, Airbnb is profiting from lawbreaking.”

An Airbnb spokesman disputed the Inside Airbnb data, saying that most hosts around the world planned to rent their units at least at pre-pandemic levels once the coronavirus subsides, and added that the share of bookings in big European cities had recently rebounded.

The company said in a statement last week: “There are as many entire home listings on Airbnb in Ireland today as there was before the pandemic. Travel on Airbnb generated an estimated €800 million in economic activity for Ireland in 2019 alone and hosts are very much focused on how they can help their local communities get back on their feet and drive the safe recovery of tourism.”

Homeownership was the subject of intense national focus during Ireland’s booming Celtic Tiger years of the 1990s and early 2000s, but the 2008 financial crash gutted the country’s economy and brought a previously hot housing construction industry to a halt. Ireland’s economy gradually recovered, but housing prices catapulted, putting homeownership beyond the reach of most people and corralling them into an already squeezed rental market.

Then came the pandemic, which brought a nationwide lockdown in the spring, a 6.1 percent drop in economic output in the second quarter and an unemployment rate that by August was measured as high as 15.4 percent.

And while some workers have moved out of urban areas while working-from-home practices are in place and some from overseas returned to their native countries during the pandemic, experts attribute much of Dublin’s abrupt rise in listings for long-term rentals to the drop in Airbnb listings.

The evidence, they say, is that availability has spiked in parts of the city where short-term listings were concentrated — something that has not happened evenly across the city or in the rest of the country.

The shift has been most pronounced in central Dublin, where owners of investment properties have been abandoning the short-term market. Jim Cryan, a retired businessman, moved his Dublin Airbnb listing onto the long-term rental market in late March. Within two and a half weeks, the four-bedroom townhouse was rented.

Mr. Cryan accepted a lease with a monthly fee of about $3,900, half of what he could have expected when the Airbnb market was sizzling. Yet he doubts that he will return to the short-term market.

“You apply common sense to it,” he said. “It’s like if you invest in a share and it collapses, you’re very loath to go back in again and get burned twice.”

This is not to say that the return of former Airbnb listings to the rental market will solve Dublin’s housing crunch.

“The underlying shortage of rental accommodation is probably at least 50,000 and closer to 70,000 or 80,000 based on trends over the last couple of decades,” said Mr. Lyons, the economics professor.

“My concern,” he added, “would be that a politician could look at this and go, ‘Oh, problem solved: Airbnb has collapsed, the European market has collapsed, we’ve got all these rental properties over and job done.’”

For one thing, while rents in Dublin have fallen since the coronavirus struck, the drop-off over all was marginal, and recent months have even seen a slight uptick.

“The underlying shortage of rental accommodation in Dublin is very acute,” Mr. Lyons wrote in the report for Daft.ie. And many landlords are wary of locking in losses for the long term.

“If you lower your rent now, the rent you set in one, three and 10 years will reflect the cut you make today,” Mr. Lyons wrote. “So, however open landlords might be to haggling ‘at the door’ and offering a month or two free rent at the start to sweeten the deal, they may be very reluctant to flag in an ad that they are indeed cutting their rent.”

Don't Miss it How the coronavirus pandemic made Sydney’s second CBD a ghost town
Up Next Coronavirus: Tenerife hotel in lockdown and new advice for Britons returning from Italy – BBC News