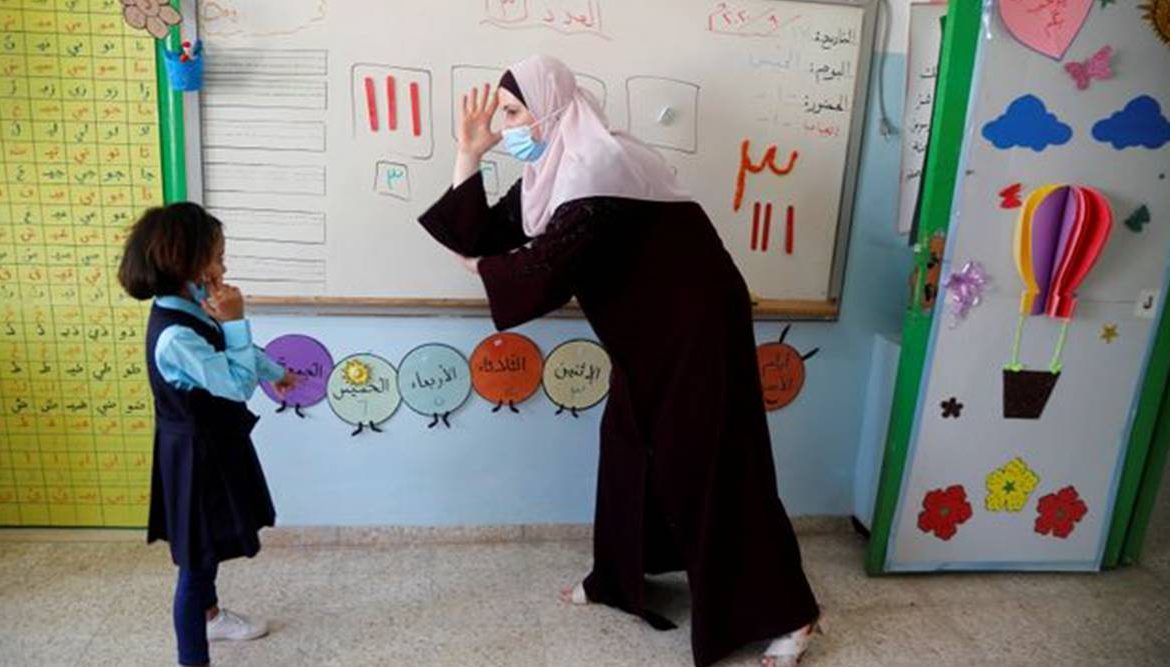 A Palestinian teacher uses sign language as she gives a mathematics lesson to deaf students at al-Hanan School for the Deaf, in Jenin in the Israeli-occupied West Bank September 17, 2020. (Reuters)

Coronavirus Global Updates: The number of confirmed coronavirus cases across the world touched 31.6 million on Wednesday, with at least 971,000 deaths. Over 21.7 million people have recovered from the disease so far.

Britain re-imposed some lockdown measures as a second wave of coronavirus infections swept across Europe, while the death toll in the United States surpassed 200,000, reported Reuters.

Sweden, which has so far avoided lockdowns, is seeing early signs that cases are rising again and could impose new measures in Stockholm.

Meanwhile, Japan is considering allowing more foreigners into the country for longer stays starting as early as next month, while keeping the Covid-19 entry curbs in place for tourists, the Asahi newspaper reported.

China on Wednesday lifted its ban on valid visas imposed earlier this year due to the COVID-19 pandemic and said that foreign nationals holding Chinese residence permits in three categories are allowed to enter the country from September 28 without obtaining new visas. On March 28, China temporarily banned the entry of foreign nationals with valid visas which, according to officials here, was aimed at restricting border entry to curb the surge of imported COVID-19 infections.

Effective from September 28, all foreign nationals holding valid Chinese residence permits for work, personal matters and reunion are allowed to enter China and there is no need to apply for new visas, the foreign ministry said in a statement. If the three categories of residence permits held by foreign nationals expired after March 28, they may apply for new visas by presenting their expired residence permits and documents to Chinese embassies or consulates on the condition that the purpose of the holders’ visit to the country remains unchanged, the statement said.

Hundreds of Indian students and professionals working in China could not return to the country following the visa ban as well as cancellation of flights.

China is yet to open for the return of foreign students studying in its colleges and universities. Currently, a number of Indian professionals and businessmen have returned to China in five Vande Bharat flights organised by the Indian government to evacuate the Indians stuck in China.

Those returning to China needed to undergo 14-day quarantine in designated hotels under strict supervision of health officials. The new adjustment is in view of the current COVID-19 situation, which is basically under control in China, and the need for epidemic prevention and control, the statement said.

Leaders at UN call for vaccine be made available to all

With the 75th UN General Assembly reduced to recorded speeches as a result of the coronavirus pandemic, leaders are using this week as an opportunity to present their visions of fighting the virus, the Associated Press reported. Philippines President Rodrigo Duterte echoed a call from many leaders when he said that once an effective vaccine is developed, it must be made available to all nations.

Israel on Wednesday reported a new record of daily cases of coronavirus, shortly before government officials were to meet to discuss tightening a new nationwide lockdown, the Associated Press reported.

The Health Ministry reported 6,861 new cases Wednesday as the outbreak showed no signs of slowing down.

Israel now has one of the world’s highest rate of coronavirus on a per capita basis, and health officials say hospitals are approaching capacity quickly.

A woman plays with her daughter next to a statue of the first Israeli Prime Minister David Ben Gurion, during a nationwide three-week lockdown to curb the spread of the coronavirus at the beach in Tel Aviv, Israel, Tuesday, Sept 22, 2020. (AP Photo)
Australia’s Victoria may speed up lifting of coronavirus curbs as cases fall

Australia’s coronavirus hotspot of Victoria is considering easing curbs sooner than previously flagged, the state’s premier said on Wednesday, as the two-week average of new infections in Melbourne dropped below 30, Reuters reported.

Melbourne, Asutralia’s second most populous city has been the epicentre of the country’s second wave of Covid-19 outbreak. The state reported 15 new cases and five deaths on Wednesday.

“We are winning this battle and we will prevail. It’s just a matter of us staying the course — not letting our frustration
get the better of us,” state premier Daniel Andrews told reporters.

Andrews said if the average holds below 30 ahead of this Sunday’s review of restrictions, it was possible further restrictions could be eased.

The Czech Republic recorded 2,394 cases of coronavirus in its highest daily rise since the pandemic began, Reuters quoted Health Ministry data as showing on Wednesday.

New cases have doubled in September as infections increase at the second fastest rate in Europe. Authorities have reimposed some measures to curb the spread of the virus, such as mask-wearing and from Thursday, stricter limits on opening hours for bars. The country has reported 53,158 confirmed cases of coronavirus so far.

A consumer rights group said on Wednesday it had filed civil lawsuit against the Austrian government over a coronavirus outbreak at the ski resort of Ischgl last winter, but it held off on a class-action suit for the time being, Reuters reported.

The outbreak at Ischgl was Austria’s biggest and helped spread the virus across Europe. Hundreds of Austrians were infected and thousands of foreign tourists say they were too, as the virus found a breeding ground in crowded apres-ski bars in February and early March.

Ischgl’s first cases was detected on March 7, days after Iceland said tourists had been infected there and 11 days after Austria first infections were confirmed.