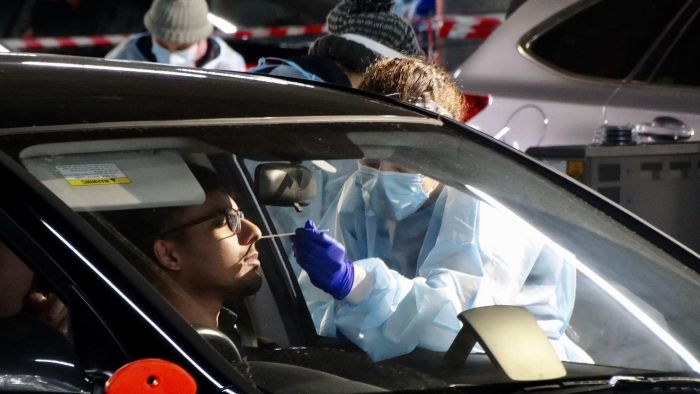 The number of daily coronavirus tests in NSW has fallen to its lowest level since mid-July, sparking warnings that getting swabbed is a “necessary overkill” even as new infections decline.

Key points:No “mystery” coronavirus infections have been identified in NSW for two weeksWhile cases in the state are dropping, so is the rate of testingNSW Health said tests had declined in recent weeks, but remained above target of 8,000 daily tests

Australia’s most populous state has averaged over 20,000 tests a day since July, after reaching a peak on September 12.

But testing has fallen steeply in the past week, despite health authorities insisting the virus is likely still circulating in Sydney.

No locally acquired coronavirus infections have been found in NSW in the past two days, prompting governments in Queensland and South Australia to relax their border restrictions.

However, NSW Premier Gladys Berejiklian is concerned about people becoming complacent, and this chart shows why.

Catherine Bennett, chair of epidemiology at Deakin University said large numbers of tests were a “necessary overkill”, even if few new cases were being found.

“You have to test more than 100 people to find even one positive,” she said.

“That’s a good position to be in.

“You want to be erring on the side of getting all those negatives to find that one positive.”

“We know that there are still a number of risks in NSW, including the high likelihood that the virus is still circulating especially in Western Sydney and south-western Sydney undetected, which is why we really need to make sure that everyone who has the mildest of symptoms comes forward and gets tested,” she said.

A spokesperson for NSW Health told the ABC that testing numbers have declined in recent weeks, but have remained above target of around 8,000 daily tests.

Professor Catherine Bennett has been watching the pandemic closely.(Supplied)

Professor Bennett argued testing in states as large as NSW and Victoria did not need to stay above 20,000 per day.

She said testing needed to be driven by how many people were exposed at different sites.

She said the “mystery cases”, where someone tests positive but the contact tracers can’t find out where they got the infection, were critical.

“They can be an artifact of too little testing,” she said.

“You are missing the links in between. We care more about the mystery cases than about the clusters.”

NSW has gone more than two weeks without a mystery case.

While authorities regularly publicise large clusters of cases and order close contacts to self-isolate and get tested, Professor Bennett warned people associated with “mystery” infections had to be more proactive.

“That transmission chain could be lost if you don’t get tested and we’ll all be punished,” she said.

She said that Victorians were testing as a way out of the lockdown restrictions.

“In NSW, testing is about staying open and following up with cases to make sure that’s safe,” she said.

Data from Flutracking, an online survey of volunteers who record any flu-like symptoms, showed that while only a very small number of people had fevers and coughs last week, just 45 per cent of those who did had a coronavirus test.

The data was collected in the week ending September 20 from nearly 62,000 people in Australia, including about 21,000 from NSW.

Professor Bennett said ideally, 100 per cent of people with symptoms would get tested, but in reality there were many reasons why people might not.

One of those, she said, was likely to be financial, although people in NSW can apply for a lump-sum Pandemic Leave Disaster Payment from the State Government if they cannot work because they are self-isolating.

“Then there’s the people trying to avoid isolation, the people who don’t recognise their symptoms, those who are scared of the test itself and those who don’t want to leave their homes,” Professor Bennett said.