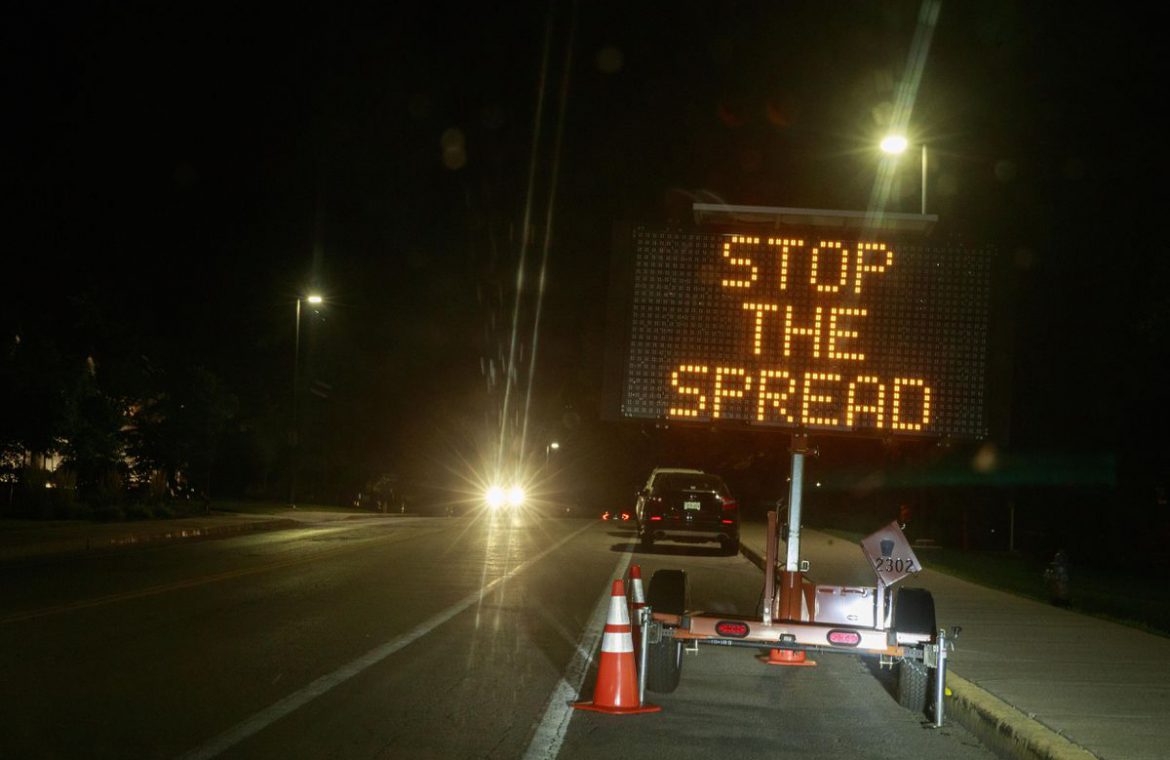 A sign in Bloomington, Indiana, warns passer-byers about the Covid-19 coronavirus. (Photo by Jeremy … [+] Hogan/SOPA Images/LightRocket via Getty Images)

Welcome to 2020, when people continue to argue about the death rate of a pandemic that’s already killed over 200,000 Americans. It’s been a bit like debating over the size of the flames when your house is on fire and you are wearing a suit made out of dryer lint.

Nevertheless, there’s been a number of reasons why estimating the Covid-19 coronavirus death rate has been challenging. The latest attempt has appeared in a research letter recently published in the Annals of Internal Medicine. It’s a good attempt but take the findings with a Pokemon backpack full of salt.

For the study, a team from the Indiana University Richard M. Fairbanks School of Public Health and the Indiana University School of Medicine (Justin Blackburn, PhD, Constantin T. Yiannoutsos, PhD, Aaron E. Carroll, MD, MS, Paul K. Halverson, DrPH, Nir Menachemi, PhD, MPH) combined two sets of data. The first set was the number of estimated cumulative total of severe acute respiratory syndrome (SARS-CoV2) infections in Indiana as of April 29, 2020. This was based off of a random sample of state residents who were 12 years and older and weren’t currently living in institutions like nursing homes. Based on testing data from April 25 to April 29, 2020, they determined who had active SARS-CoV2 infections (for example, from cotton swab up the nose tests) and who had had infections previously (based on blood tests for antibodies). The resulting estimate was 187,802 cumulative infections in Indiana from the beginning of the pandemic to April 29.

For the overall non-institutionalized population in Indiana, the IFR came out to be 0.26 percent. In other words, for every 1000 people in the community who had gotten infected, an estimated 2.6 ended up dying. The average age at death was 76.9 years.

You may have heard that pandemic has been hitting non-Whites worse than Whites. Well, surprise, surprise, non-Whites had an IFR of over three times that of Whites (0.59 percent versus 0.18 percent). Before you blame age for this difference, consider this result: the average age of death for non-Whites was 73.3 years old compared to 78.9. So non-Whites were dying not only more frequently but also on average at a younger age.

The World Health Organization (WHO) has reported an infection fatality rate (IFR) of 0.5 to 1 … [+] percent for the Covid-19 coronavirus, (Photo by FABRICE COFFRINI/AFP via Getty Images)

So, what does this all mean? The overall IFR was a little lower than the 0.5 to 1 percent range reported by the World Health Organization (WHO), based on other studies. Undoubtedly, people will begin twisting these numbers like a fishing net made out of Twizzlers to fit their political and business agendas. Therefore, it’s really important to keep in mind what the limitations of this study are and what you can and can’t get from the IFR.

First of all, these results came from a random sample from a single state at a single point in time. You know the saying, what happens in Indiana may stay in Indiana? As is the case with studies, polls, and pizza, samples have their limitations. It may not be the same as seeing the whole pie and could be biased in different directions.

Secondly, it’s not clear how well the estimated number of Covid-19 cases matched the actual number of Covid-19 cases. Testing in the U.S. has been like an alpaca driving a pick-up truck: very haphazard. It hasn’t been clear who is getting tested and who isn’t and what kinds of tests are being used. This was especially true during the first few months of the pandemic

Most importantly the results from this study simply give you an idea of the overall population death rate. Population rates are not the same as individual risk. You can’t really use them to predict your chances of death if you get Covid-19.

Ultimately, the IFR is only one measure of the danger of the Covid-19 coronavirus pandemic but certainly not the only measure. Death is not the only problem that an infection can cause. Can you imagine if you relied solely on death as the measure of how you are doing in life? A doctor would then walk in to see you and say, “OK, you look alive. We’re done here.” Even if you survive the initial infection, the virus can cause lots of problems like major respiratory issues or organ damage that could persist well beyond the initial infection. Even if the IFR ends up being one percent or below, that wouldn’t mean that 99 percent of the Covid-19 coronavirus cases are “totally harmless.”