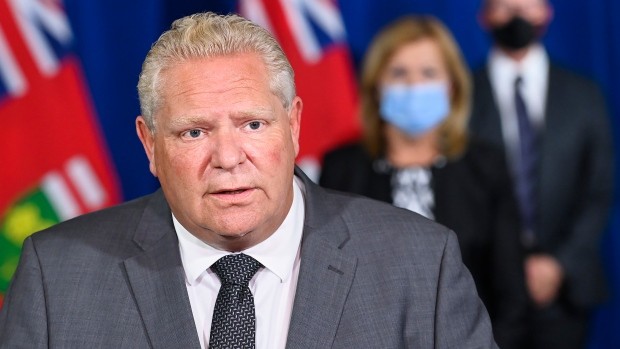 TORONTO —
The Ontario government is actively considering new regional restrictions and province-wide measures to curb the spread of COVID-19 that would affect some restaurants, bars, banquets halls and gyms, CTV News Toronto has learned.

CTV News Toronto has learned Premier Doug Ford’s cabinet is also reviewing a mandatory masking policy that would make it a province-wide requirement to wear a face covering in workspaces or indoor settings where physical distancing cannot be maintained.

The final decision is expected to be made once cabinet meets this morning.

Ford is expected to speak at 1 p.m. today, which CTVNewsToronto.ca will stream live.

Sources with knowledge of the decision tell CTV News Toronto the government is hoping the new restrictions would send a strong signal as cases of COVID-19 continue to increase.

“This is the final thing we can do before moving to Stage 2,” the source told CTV News Toronto on the condition they not be named in order to discuss internal deliberations.

The regional restrictions being recommended by the provincial health command table would affect bars, restaurants, banquet halls and gyms in Toronto, Peel Region and Ottawa — with new capacity limits and contact tracing requirements.

Restaurants, bars and nightclubs would face new capacity restrictions, would have maximum table capacity of six and would be required to collect contact information for every diner or patron.

Gyms in the affected areas would also face capacity limits as well, including restriction on group classes.

While a final decision has yet to be made, the recommendations came from the medical officials the Ford government has relied on to guide them through the pandemic.

The potential changes come one day after Ford said the government would not be shutting down restaurants and any new measures would be “evidence based.”

“There has to be justification if we close down restaurants,” Ford said during Thursday’s news conference.

Ontario’s Chief Medical Officer of Health said the province was considering more surgical measures, that would target the areas of spread, rather the province as a whole.

The new rules – if approved — are expected to take effect on Oct. 4 and would come under review after 28 days or two 14-day incubation periods of the virus.

Don't Miss it Coronavirus LIVE Updates: Experts Say No Vaccine by Fall of 2021; AstraZeneca’s Japan Trial Back Up
Up Next Trump Tests Positive for Coronavirus: Live Updates