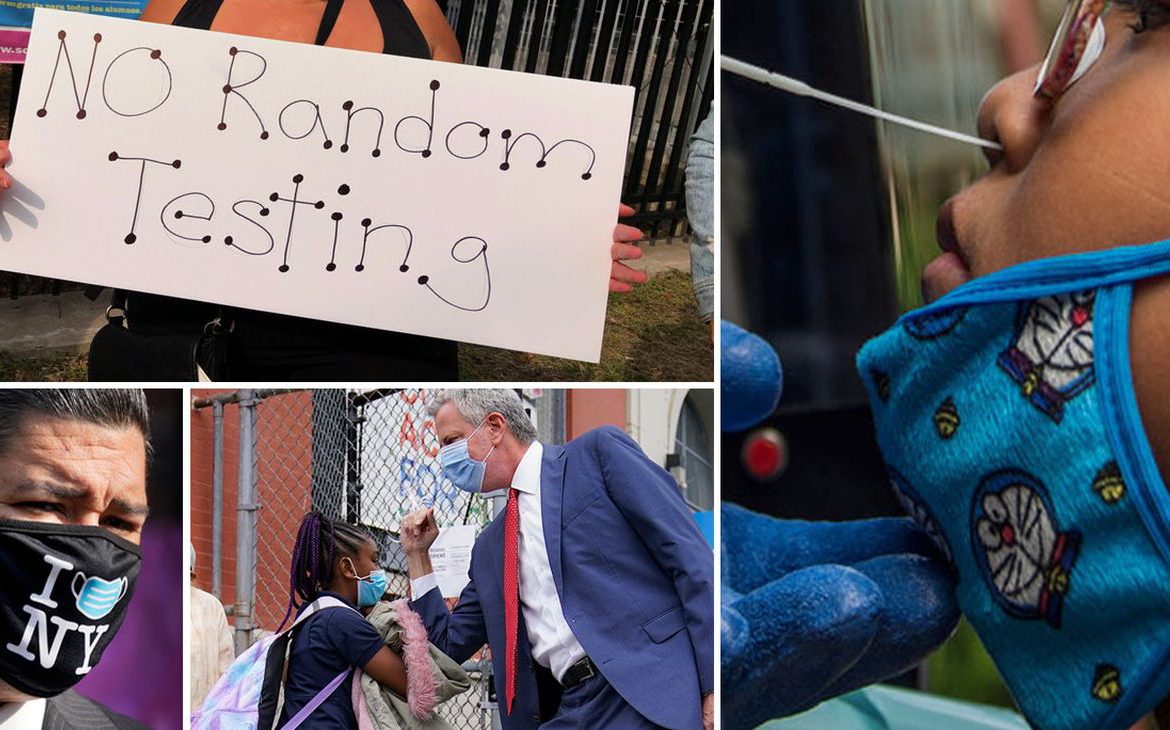 STATEN ISLAND, N.Y. — The city’s plan to conduct random coronavirus (COVID-19) testing at public schools throughout the current academic year, beginning this month, has parents outraged — with some stating they will not allow their kids to be tested in school.

“Every school is doing this testing monthly,” Mayor Bill de Blasio said at a press conference in September. “It is random. I want to be clear about that — so it’s a mix of members of the school community who will be tested every month. Every union is going to work out their specific approach to it.”

Parents told the Advance/SILive.com that they’re uncomfortable with their children being tested without being present, citing concerns over the testing process and who will have access to the results.

“We don’t want to go full remote; we want to put some kind of normalcy into his life. I want to give hybrid learning a chance,” said Stacey Favara, of Annadale, referring to the city’s blended learning model, in which students return to their school building one to three days per week, learning virtually the rest of the time. Parents also have the option of students learning remotely full-time.

Favara’s son is a seventh-grader at Elias Bernstein Intermediate School (I.S. 7), in Huguenot, and she said she feels that testing should only be done if a student exhibits symptoms — calling the randomized process “scary.”

*** CLICK HERE FOR COMPLETE COVERAGE OF CORONAVIRUS IN NEW YORK ***

New York City students began returning to school buildings for the 2020-2021 academic year as part of a phased-in approach, with middle and high school students starting their return this past Thursday.

Students in 3-K, pre-K, and District 75 were the first to begin reporting for in-person learning — re-entering buildings on Sept. 21, followed by K-5 and K-8 students this past Tuesday.

Parental consent is required for the testing of any student under the age of 18.

If a student does not receive parental consent for testing, or refuses to take the test, the student will be moved to the remote learning cohort, according to the United Federation of Teachers. Any staff member who elects not to participate in random testing will be placed on unpaid leave, according to the city Department of Education (DOE) and the union.

The testing was originally slated to begin Thursday, Oct. 1, however, de Blasio announced at a press conference this past Tuesday that the program will not begin until next week, explaining that the consent forms are currently being distributed to parents. He urged parents to return the forms right away.

“Along with that consent form, we’re asking parents to go ahead and send it back, or if they have concerns, raise them and we’ll get them answers, but we want as many kids as possible to get into this testing approach as quickly as possible,” the mayor said.

After the mayor’s announcement, NYC Schools Chancellor Richard Carranza elaborated on what mandatory testing means and how it will work within a school.

“Providing our testing partners with a sufficient monthly sample size to identify the prevalence of COVID-19 is critical in our ongoing fight against this virus, and to ensure we can keep school communities in school buildings for in-person learning,” Carranza said.

Students who do not have parental consent for testing may be required to move to remote learning if the total number of consent forms is not enough — based on the size of the in-person community, he said.

The randomized monthly medical monitoring program will test anywhere from 10% to 20% of the school community. The size of the sample will depend on the population of the school, said Dr. Jay Varma, the mayor’s senior adviser for public health.

The size of the school’s in-person community will determine the percent of the population needed to be tested:

The next few weeks will allow room for adjustments based on information gathered from school officials and parents, however, the city says it’s confident it will receive the number of consent forms needed for each school’s sample size.

Some parents said a better idea would be if the DOE required a note from a child’s pediatrician showing a negative COVID-19 test.

“We want to assure you that if your child is selected for testing, but is uncomfortable or unable to be tested, we will not test your child and will work with you to address any concerns, so that they can participate in future testing,” Carranza said.

Jennifer Crinion said she is concerned about her 5-year-old daughter being tested without a parent present, explaining she shouldn’t have to choose between in-person learning and remote learning based on a test.

“We all want what’s best for our kids, but with this it’s like damned if you do, damned if you don’t,” said Crinion, who lives in Great Kills but did not want the name of her daughter’s school used in this report..

She added she would like more information about who will be doing the testing, and who gets access to the results.

“… it’s just scary for these kids. They see the Q-tip and they freak out,” she said.

The mayor has said the test will be a self-swab, not the long Q-tip that is inserted far into the nasal cavity.

When asked about the chancellor’s announcement about consent forms, Crinion said, “We decided that we are keeping her hybrid until she can’t go any more. I don’t want to back down and we certainly will NOT be giving in. They are holding our kids’ education hostage. They don’t want our kids in school,” she said.

Favara also said her son will continue with the blended learning model until he’s “forced” to move to remote learning.

“It is crazy what the school is asking. They are not getting my consent to test my child at school without me being present,” she said.

When asked about the testing policy, DOE spokeswoman Miranda Barbot told the Advance/SILive.com, “Testing keeps our communities safe, transmission low, and makes in-person learning possible — we need everyone in our school communities to participate. Starting next week, it will be mandatory for schools to participate in our random testing program. This is a brand-new endeavor, and we will do everything we can to make sure it’s a success.”

Families will be notified of their child’s school’s test date two days in advance, according to the DOE.

The agency said it understands that parents may not sign the consent form immediately, so families will be repeatedly asked to fill out the form, with the idea being that additional forms may trickle in during the first few weeks of school.

IS THE CITY’S PLAN ENOUGH?

New York City’s plan to screen public school students for coronavirus may be insufficient to detect and prevent large outbreaks, according to a new report.

On Friday, the New York Times reported that new research from New York University indicates that the city’s plan to test 10% to 20% of the school community once a month may not be sufficient to detect the kind of large outbreaks that could shutter schools.

“The outbreaks could be quite large by the time they are detected by the monthly, 10-to-20 percent testing,” Anna Bershteyn, the lead author of the new analysis, told the New York Times.

Don't Miss it A second wave of COVID-19 has hit Toronto, but here’s why the first wave never ended in some neighbourhoods
Up Next Lockdowns force women to get unsafe abortions | COVID-19 Special