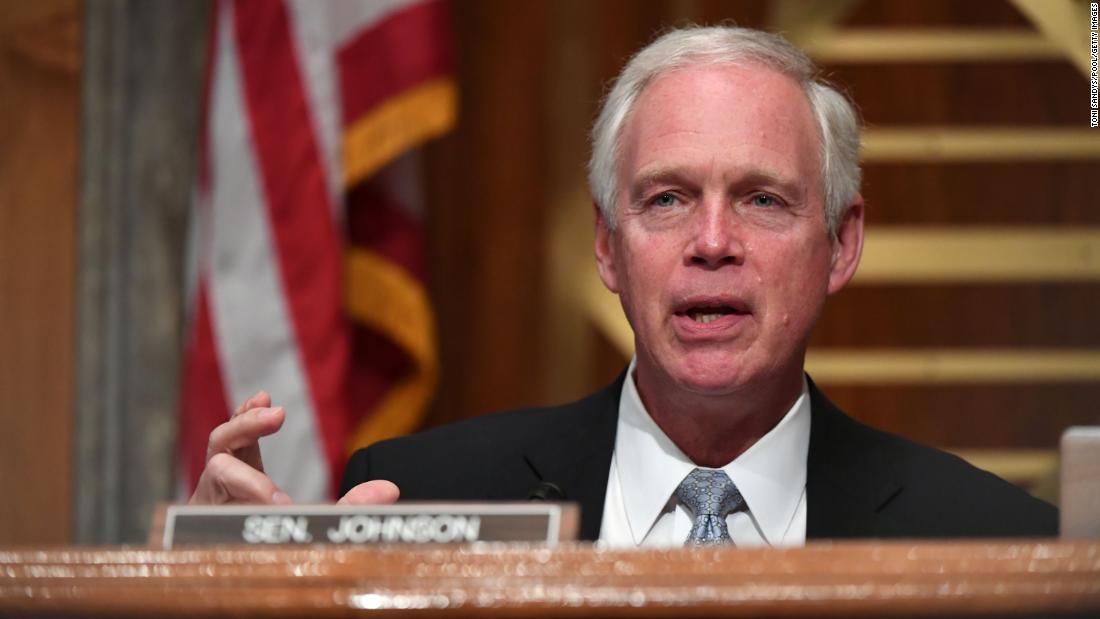 Sens. Mike Lee of Utah and Thom Tillis of North Carolina, who sit on the Judiciary Committee, tested positive for Covid-19 on Friday — just days after attending a White House event where President Donald Trump nominated Barrett. Multiple attendees of that event, including Trump, have tested positive in the week since the ceremony, which featured many people not wearing masks and not observing social distancing protocols.

Johnson did not attend the Barrett nomination ceremony — where several people appeared to have been exposed to the virus — because he was quarantining from a prior exposure, during which he twice tested negative for the virus, according to the spokesman.

Unlike Democratic senators, Senate Republicans meet three times a week for lunch. And while they sit in a large room, they remove their masks to eat and to speak. Johnson, Lee and Tillis all attended Senate GOP lunches this week.

If the three senators remain out this month, it would effectively prevent Barrett from being confirmed to the Supreme Court until they return, which could be after Election Day during a lame-duck session. A lame-duck confirmation is a situation that GOP leaders are eager to avoid in case they lose control of the chamber next month.

Senate Republicans, pushing to get Barrett on the Supreme Court by month’s end, have circled October 15 as a crucial day when they will need Tillis and Lee to return. That’s because they will need a quorum of senators to begin the process of voting on the nomination.

On October 15, Senate Judiciary Chairman Lindsey Graham needs to have nine total members of the committee present, including two Democratic members, to officially consider the nomination. At that meeting, Democrats would use their power under the rules to delay the vote on the nomination to the following week, setting up a committee vote by October 22. A floor vote would happen later that week.

But Democrats may choose to boycott the October 15 proceeding. If they do, the GOP won’t have a quorum and won’t be able to begin the process. Graham can get around the boycott if Tillis or Lee are back — and they move forward with a committee vote to approve the nomination. To approve the nomination, the committee rules require a majority of members to be present. The committee is split between 12 Republicans and 10 Democrats, so if the two GOP senators are both out and Democrats boycott, they will not have a majority to vote on the nomination.

A further complication: Democrats and the GOP appear to be at odds about whether the committee is allowed to even meet if the Senate is not in session. On Saturday afternoon, Senate Majority Leader Mitch McConnell announced that Senate floor activity would be delayed until October 19, though committee work could continue. That adjustment to the schedule would require agreement from the Democrats for unanimous consent.

“If It’s too dangerous to have the Senate in session it is also too dangerous for committee hearings to continue,” Schumer said in a statement after McConnell’s went out. “Leader McConnell and Chairman Graham’s monomaniacal drive to confirm Judge Barrett at all costs needlessly threatens the health and safety of Senators, staff, and all those who work in the Capitol complex.”

Lee and Tillis both said in statements Friday they would isolate for the next 10 days. Tillis said he didn’t have symptoms, while Lee said he had symptoms “consistent with longtime allergies.” But if they come back too quickly, they may flout guidelines from the Centers for Disease Control and Prevention, which require isolation for 10 days after symptoms first appear and for at least 24 hours with no fever or fever-reducing medicine. It further says that people who have tested positive and don’t have symptoms should also isolate for 10 days.

The committee still plans to have the confirmation hearings beginning October 12.

Republicans are worried about getting enough votes to confirm a nominee in a lame-duck session after Election Day if they lose their majority — and the White House — and Democrats prepare to take power in January. The fear is that one or two GOP senators may break ranks after seeing the election results and citing the will of the voters.

Already, Sens. Susan Collins of Maine and Lisa Murkowski of Alaska have indicated they are “no” votes if the confirmation vote happens before the election, and could vote against a nominee in a lame-duck session as well.

With a 53-47 Senate majority, Republicans can not afford to lose more than three senators in order to get the nomination confirmed.

Republicans, who control the Senate, do have some options in moving the nomination along even without senators present. Graham could hold virtual confirmation hearings for Barrett, or hold the hearing in person but have Lee and Tillis attend remotely if they’re still in quarantine.

But even if Republicans on the committee don’t have a quorum when it comes time to vote this month, McConnell can always advance the nomination to the floor under the rules without a committee vote.

Johnson is not on the Judiciary panel but would not be able to vote on the floor if he were not present. Johnson’s office said the Wisconsin senator was again exposed “shortly after” returning to Washington on September 29 and was tested Friday afternoon.

“This test came back positive. Senator Johnson feels healthy and is not experiencing symptoms. He will remain isolated until given the all-clear by his doctor,” Voelkel said in a statement.

Most of the staff in the Republican senator’s Washington office have been working remotely, and the office will go all-virtual for the immediate future, Voelkel said.

This story has been updated with additional developments Saturday.